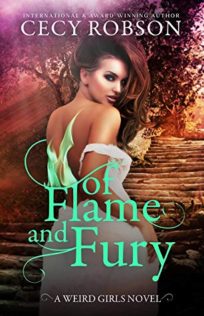 Taran Wird, the loudmouth mistress of flame and lightning, didn’t want to attend the formal gathering of the supernatural elite. She did so only to help to unite the supreme beings in attendance in one common goal: protecting Taran’s sister, Celia.
Celia is pregnant with alpha werewolf Aric Connor’s child, the same child prophesized to save the world from uprising evil. Evil wants this child dead before he is born and, more importantly, before he can grow strong enough to stop it.
Taran and her werewolf lover, Gemini, put plans in place to protect Celia. Master Vampire Misha Aleksandr and his clan also swear their allegiance to Celia and vow to keep her from harm. The witches even cast protection spells around the manor to curse anyone with malintent who enters. Nothing was supposed to go wrong, except everything did.
Creatures that shouldn’t exist stalk the grounds and invade the premises, and every curse meant to shield the guests turns against them. No one counted on the powerful being who arrived uninvited. But he’s here, manipulating the magic enclosing the estate to work in his favor.
As body counts rise and allies become enemies, chances are Celia won’t survive the night. But evil never counted on how hard Taran Wird would fight, even at the expense of her life.

Get comfortable for this non-stop ride. What a way to close out Taran’s chapter of this series.

In this final story set from Taran’s point of view, all the factions (witches, shifters, vampires and the Wird sisters) are meeting up at the witches new headquarters so they can discuss and pledge alliance to protect Celia and Aric’s unborn baby who Destiny declared would save the world from evil. The witches’ new headquarters is heavily warded with protection spells which should make it the safest place for everyone to meet.

Problem is someone else has taken the witches’ wards and twisted them.  They have turned the mansion from a safe harbor into a house of horrors, complete with monsters out of nightmares, rooms that suddenly have no exits or which exit into another part of the house and also a ward against healing which is leaving the paranormals healing at an almost human rate. With all the monsters gunning for Celia, everyone is literally giving their lives to protect her, but every time Taran tries to take her somewhere safe, they end up dumped out into another horror show.  No matter how many monsters they kill, more keep flooding in.

Defeating the monsters simply isn’t working so Taran and her sisters have to find out who is working so hard to kill Celia and her baby and destroy that source, and they have to do it now because they are running out of allies to throw in front Celia.

Make sure you have a few hours to spare before you start this because this story doesn’t stop from page 1 all the way to page 282 and you are not going to find a good place to stop.

This was so good and so tension filled especially since this series is a little dark and Cecy has occasionally between pretty brutal to her characters. When an author goes no holds are barred, everyone is at risk.

This is the final story from Taran’s point of view, but I don’t think that this series is over since there are still some issues left open ended (for those who survive that is) and I’m not ready to walk away from Celia, Taran and their sisters.

“We have to fight out own shadows?” Emme all but shrieks.

“No.” Well, crap, at least I hope not. “I mean when we walked in, our shadows faced the wall behind us. Now, they lined along the exit.”

“The candles don’t follow light patterns the way the sun does,” she reasons. “And they move and…stuff.”

She’d trying to make sense of it all. Deep down inside, my little sister knows we’re fucked.

And don’t I prove my point when another shadow appears between ours?  The shadow rises, flinging her long hair back as she arches and glides her hands down her gi-hugic breasts. Her fingers dance along her body, sweeping lower, reaching her lady parts, and going deep. That’s when her laugh turn naughty, gleeful, and taunting.

We turn around slowly. Emme jumps when she sees what’s up. I don’t jump. My jaw is too busy crashing to the floor with how messed up this situation is.

The curtains are gone, replaced with a concrete gray wall and bathtub you might find in Rome back when Julius Caesar was your bath buddy. A woman, very naked and very wet splashes about having the time of her life in that tub.

She winks at us, her blue eyes blazing, and goes to town on the largest and roundest set of breasts I’ve ever seen in real life. Dark hair gathers around her shoulders and curves.

“It is not,” I fire back rather defensively. “My boobs aren’t that big or round.” I wave in giggly girl’s direction. “And look at her nipples.”

“They’re a tad exaggerated,” Emme agrees. “And her nipples very much point north not south–“

“They point straight, damn it.”

“Taran,” Emme says, again, evidently trying to get me to focus. “Look at her. She has your hair and eyes and…It’s you. Johnny recreated you with his twisted taste.”

“No, Emme. And I don’t want to. This situation is messed up enough without the little perv making versions of my he probably whacks off to.”

Creepy gal shoots me an impish grin and a rather seductive smile, very much reinforcing I’m very right to take it there. “Gawd,” I groan.

Emme clasps my elbow, her touch soothing me. “Come on,” she whispers. “Let’s get out of here.”

“Well, yes,” Emme says. “She’s not doing anything. All she did was laugh and take a bath.”

It must be a beautiful place in Emme’s head. In my twisted mind, the bitch blows up, and demon children crawl from what’s left of her boobs. “She hasn’t done anything yet. That doesn’t mean she won’t or that her death won’t weaken Johnny significantly.” I point out. “Let’s just kill her and get it over with.”

As I always, I said the wrong thing. Creepy gal abruptly stops laughing, and the candles burn out one by one, leaving us in darkness.