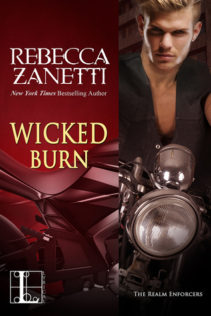 [box style=”rounded” border=”full”]The teasing is finally over.  We have heard over two series about the past between Nick and Simone and we finally get all our answers. [/box]

We have been teased through two series about the volatile relationship of Nick and Simone. Simone Brightston is a witch and head of the Council Nine. We know that in Marked (Dark Protectors), the former leader of the Demon Nation captured and imprisoned Simone and tried to use threats against her to keep Nick in line. Nick called Zane for help in freeing Simone but even Zane didn’t know the extent of Nick’s complex relationship with Simone.

In Wicked Burn, we finally learn that almost 100 years ago Nick Veis left the demon nation intent on marring his love, Simone and support her desire to be in the Council Nine. He even bought her a tiny cottage that they could raise their children in. On the night Nick was to propose, he received a surprise visit from the Prophet Lily who told him, in tears, that she had foreseen Nick’s future and it did not involve setting down roots. Nick needed to return to the demon nation to be there when Zane was born and raise him and train him so that Zane could one day defeat his uncle and be the future leader of the Demon Nation. If Nick ignored his future, all the mates would suffer under the virus that would be created, including his Simone. Nick had no choice but to break both of their hearts and walk away from Simone.

The war is now over and Zane leads the Demon Nation. Lily’s prediction for Nick didn’t provide any insight into Nick’s future after the war, and Nick presumed that meant he would not survive. Now that all the nations are a peace, and Nick is realizing that while Simone is still angry with him, he has all eternity to convince her to change her mind.

That is until he finds out that someone is trying to set up Simone to take the fall for the creation and distribution of the drug, Apollo, which is being produced exclusively to destroy witches. With evidence mounting against her, and the Council bringing her up on charges, Nick will be by her side during the entire trial, especially since the penalty for guilt is more than just the loss of her Council seat and imprisonment. If they lose, Simone will lose her life.

Nick has plans for their future and it will not involve losing Simone again. Together they will fight the charges and with the other Enforcers, they will find out who is really behind the production of Apollo.

THOUGHTS:
I have been looking forward for Nick and Simone’s story for some time now. While I did enjoy it for the most part, there was quite a deviation in the middle of the story to introduce us to previously undisclosed, new characters that Rebecca will be introducing into the series and this world building.

These characters have never even been hinted at before, so it was a complete surprise, but while it normally would have been an interesting and exciting twist, it ripped us away in the middle of the whole Simone is going to trial and someone is setting her up plot that we have been building towards. So we have been working through three Realm Enforcer books toward Simone being set up, and being picked up to go to defend herself to the Council (most of which had to be excused since they are all blood relations of Simone) and then we are literally dragged away by these previously unknown family members and go into a whole sub-plot about how Simone is not a full-blooded witch and how since she is half-new character, she shouldn’t have children with a demon.

Once we finally get back on track with the plot against Simone, the story ends rather abruptly at about 75 percent. WTF??? This has been a plot point during the first three stories and apparently, it will be continuing in the future, because it is not 100 percent settled. We still don’t know who is behind the making of the drug.

So after waiting all this time to get Nick and Simone back together, we get dragged into a side plot which completely throws off the momentum of the trial against Simone and once we finally say “see you later” to the new characters and get back to business, it ends too quickly without a full resolution of Simone’s problem. Add to that, with everything going on, Nick and Simone’s romance was fit in here and there as more of a sidebar.

The remainder of the book was a nice little bonus story about Talen and Cara, which was great, but after waiting all this time for Nick and Simone’s story, I was kind of disappointed.

He reached the bike and held a hand out for Simone to jump on behind him. She did, her arms wrapping around his waist.

He glanced over his shoulder. “Why does your mom dislike me so?”

Simone leaned her chin on his shoulder, putting their lips in very nice proximity. “I think she wants me with a purebred witch, considering my lineage. She also knows I want to lead the Nine, and ambition is everything to her. And, well, our last breakup left me a bit bereft, I’m afraid. As a mother, she probably doesn’t want to see that happen again.”

Bereft? If Simone was willing to reveal that much vulnerability, she had to have been much more than bereft. Suddenly, his chest ached, and his earlier humor dissipated. “I’m sorry I hurt you.”

“The past is over, and so long as you understand I’m not going back, we’re good.” She leaned in and brushed a kiss across his mouth. “There’s no reason we can’t enjoy each other right now.”

“I know that you’re not the same girl you were, and to be honest, I like the badass woman even better.” He smiled against her, surprised by how little she knew him. “I plan to enjoy you to the fullest, but if you think this is casual, think again.”

He half-turned and captured her mouth, not caring whether the soldiers saw. The kiss was hard and forceful, because he was done holding back. Finally, he raised his head, gratified to see her eyes cloudy and her lips a pretty pink. “Simone.  In case you need it spelled out, I’m making a claim.”

Her eyes darkened to a mysterious midnight he couldn’t read. “I”m not the type of woman who needs to be claimed, Veis.”

“Ah, bunny. You’re exactly the kind of woman who needs to be claimed, and anybody not up to the task would bore you immediately. Let me be perfectly clear that I’m up to the task.” Hell. He was probably the only male on earth who could claim her, the only one with the necessary power, spirit and brains. “Look at it as an adventure, or look at it as something you want, but either way, you will be claimed.”

The flush across her face deepened with anger and something more. Need.

He understood her. She was fiercely independent and had never been able to rely on a male before, which made his path not only more difficult but entirely worth it in the end. She wanted to trust and belong…and only late at night, under the covers, did she let that craving slip with him. He’d bet his last stock marked fund that she’d never even hinted at her vulnerability with another male.

Whether she knew it or not, she’d made her choice.

One response to “Review: Wicked Burn by Rebecca Zanetti”