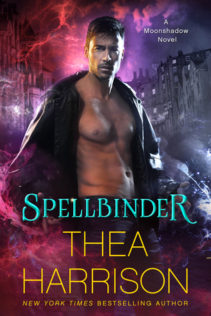 Kidnapped while on tour, musician Sidonie Martel is transported to the mystical land of Avalon. A human without magical ability, she is completely vulnerable to the deadly forces surrounding her.

When she defies her captors and refuses to share her music, an act of violent cruelty leaves her broken, her ability to play silenced, maybe forever. Her only hope is a whisper in the dark, gentle hands that offer healing, and a man who refuses to show her his face yet who offers advice she dare not ignore.

One of the most feared and powerful sorcerers in history, Morgan le Fae serves a Queen he despises, Isabeau of the Light Court. Once a famous bard and an advisor to kings, Morgan has been enslaved to Isabeau for hundreds of years, acting as enforcer and the commander of her deadly Hounds.

Sidonie’s music touches Morgan in places he had abandoned centuries ago, and her fiery spirit resurrects feelings he had believed long dead. For Sidonie, trapped in captivity, passion offers a comfort she cannot resist.

But Isabeau holds Morgan bound in magical chains that only Death can break. And in the court of a cruel, jealous Queen, the only thing that burns hotter than love is revenge…

In a story about a wizard, it is Thea Harrison’s writing that is the real magic.  It took me a day to read to read Spellbinder, and several more days to finally put it down.

I have a new book boyfriend (and girlfriend) in Spellbinder.  I just adore these two characters.

While Thea Harrison only hints in the story that Morgan might be Merlin from the King Arthur legends, she outright says that Merlin’s abduction from Camelot was her inspiration for this story in the author’s notes.

We have met Morgan le Fae in Pia Goes to Hollywood and in Moonshadow.  Morgan is a very powerful wizard and the enforcer for the Queen of the Light Fae, Isabeau.    Most of the Elder Races fear him since Isabeau is a bit unstable and she sends him out whenever Isabeau feels slighted by those lesser races.   She had him destroy or hide all the crossover passages from Earth to the Dark Fae Court, trapping their knights here with no backup for decades. We do see something odd in Morgan’s behavior in Moonshadow when he confronts Sophie in Town.   “if my Queen does learn about you, and she orders me to do a thing, you must understand–I will do it. I must.”    This seemed a little off that he might suspect something of Sophie, but not act on it to protect his Queen.

In Spellbinder, we learn that centuries ago, Queen Isabeau coveted the powerful wizard belonging to a human king.  She stabbed him with the Death’s Knife known as Azreal’s Athame which turned him into a lycanthrope and bound Morgan by a geas (a compulsion) to obey all of Isabeau’s orders to the letter.  In taking him from his King’s side, the King and his Kingdom eventually fall in battle.  The Queen took away Morgan’s freedom and destroyed everything he loved.   He loathes her, but because he must follow her orders to the letter, he also tries to disobey her whenever possible.  He knows how to wiggle around them whenever possible, (like not being ordered to hurt Sophie, just question her)  and wiggling around Isabeau’s order is exactly what Morgan does to get a bit of freedom from Isabeau.

Morgan was shot with a silver arrow during the fight in Moonshadow and Isabeau orders him to get away from her until he is completely healed.  So before she can realize her error, Morgan takes the passageway to Earth and keeps his injury fresh so he does not feel compelled to return to her side.  This is the first measure of freedom Morgan has had since he was bound to Isabeau.  While here, Morgan stumbles upon a concert being performed by master violinist, Sidonie Martel.  Her music combined with his brief freedom, reawakens Morgan’s love of music and life, and he follows her tour through Europe attending all her concerts.  But his fixation with Sidonie doesn’t go unnoticed.

Robin (the puck) from Moonshadow loves Sophie and he will do anything to protect her from Isabeau’s wrath and Morgan’s power, even if that means tossing an innocent into hell.  Robin kidnaps Sidonie and presents her as a gift to Isabeau knowing the temperamental Queen will eventually have a tantrum and hurt Sidonie, possibly forcing Morgan to do it.  Robin hopes that Sidonie will become a wedge between Isabeau and Morgan, and that Morgan would choose Sidonie over his Queen.  Morgan was commanded not to speak of it, so no one knows about the geas.  Robin is unaware that his plan is doomed from the start, and so is Sidonie because of him.  Morgan has no choice but to give up his new found freedom and return to Avalon to try and protect Sidonie as well as he can, but he must try to keep away from the Queen so she can’t countermand her last order.

As expected, an angry Sidonie sets off Isabeau’s temper and she orders all of Sidonie’s fingers to be broken and then tosses her in the prison to rot.  Morgan comes to Sid in the dark of her cell, healing her and bringing her food and water, but Morgan was ordered long ago not to release prisoners so he cannot help her escape.  All he can do is provide comfort.  Morgan always stays in the shadows so Sid cannot identify him to Isabeau or else she would simply order him not to help Sidonie at all.

And it is not just Isabeau’s orders that he fears.  He doesn’t want Sidonie to learn who he is simply because every creature knows who Morgan le Fae is and the atrocities he has performed on behalf of the Queen.  Right now, Sidonie treats him as a friend and he doesn’t want to lose her trust or affection.  He knows that the beast he has become doesn’t deserve either.

Morgan and Sidonie grow close as he cares for her in the prison while he uses his freedom to research a way out of the geas.  If he can break the bond they can both be free of Isabeau.

Morgan and Sidonie are wonderful characters and have a great dynamic.  Their affection grows naturally as they spend time together and work together to both get free from Avalon and Isabeau.  Sidonie is smart and generous, and until he meet Sid, Morgan had all but given up on life after centuries on Isabeau’s leash.  He would have committed suicide long ago if Isabeau hadn’t commanded him not to hurt himself.   You know I love my wounded heroes and it is wonderful to see Sidonie bring Morgan back to life.

Thea gave us dynamic new characters in a story set in the well loved world of the Elder Races series so we can easily jump into this spinoff and take the time to get to know the characters.  I can’t wait for more.

He hadn’t wanted to tell her who he was because he didn’t want to lose her. And now he clearly believed he had.

“Please, for the love of God, stop,” she said in a gentle voice. Reaching out, she slid off the bed to kneel on the floor in front of him, put her arms around him, and hug him as tightly as she could.

He was holding himself so rigidly she was afraid he might shatter. That massive composure was coming at a cost, and now her heart hurt for an entirely different reason. Blindly, she rubbed her cheek against his, stroked his hair with both hands. Stop, please stop.

Then his rigidity broke with a suddenness so sharp it was almost audible. He clenched around her, bowing his shoulders as he held her with his entire body. She could feel each one of his fingers pressing along her back and at the nape of her neck.

“You are my friend,” she said softly in his ear. “You are the best friend I have in this wretched place.”

He put his face in her neck, which muffled his voice. “I’m your only friend in this wretched place.”

“True,” she acknowledged. His heartbeat hammered against her breasts. “Even so, I trust, respect and rely on you.”

She insisted, “On you, the man, not the geas. I know you will never hurt me. I know you will support, respect, and defend me, and you will never coerce me, and never try to push past any barriers I may erect.” She pulled back just enough so she could look deeply into his eyes as she said, “And I am so glad I get the chance to tell that to you face-to-face, Morgan.”

As she watched, a flood of emotion tightened his face. Huskily, he said, “Your music might be transcendent, but I’m not so sure about your smarts.”

Widening her eyes, she gave him a wry smile as she gestured around the bleak little room. “I know, right? Who else could get herself in such a pickle? I mean, look at these clothes!”

Reluctant laughter flashed across his handsome face. Then, almost as quickly, it vanished, to be replaced by an expression of such vulnerable heat her eyes sparked with wetness.

“Morgan,” she whispered, to savor the taste of his name in her mouth. “Morgan.”

Shadows grew in the room as the unnatural candle flame died down to its normal size, the intense, burning gold replaced with a soft, gentle glow.

Giving her a slow, coaxing smile that turned the heat in the room up by a thousand degrees, he stroked her lips with the balls of his thumbs as he murmured, “Can we get back to talking about possibly inviting that werewolf for sex?”

One response to “Review: Spellbinder by Thea Harrison”