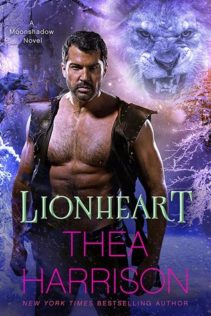 Lionheart is the final story in the Moonshadow trilogy…

King Oberon reigned over his Dark Court in Lyonesse for centuries, until an assassination attempt laid him low. Now he lies unconscious in his snow-bound palace, while his Power battles the enchantment that threatens to end his life.

A skilled trauma surgeon and magic-user, Dr. Kathryn Shaw reigns at the top of her profession in New York. Then comes a challenge she can’t resist—she is asked to cure the uncureable. Just getting close enough to try healing Oberon is a dangerous proposition. When she does reach him, he awakens too soon.

Roused from darkness by Kathryn’s presence, Oberon confronts the beautiful stranger who claims she wants to save his life. But the enchantment has frozen his emotions. How can he learn to trust her when he can’t feel anything?

Oberon’s desire is icy, devoid of all tenderness. Not only must Kathryn match wits with him, she must also fight her reaction to his touch, because there is so much more at stake than her own endangered heart.

For the Dark Court faces its most deadly peril yet. Its ancient enemy Isabeau, Queen of the Light Court, is obsessed with its annihilation, and Oberon must be brought to remember his loyalty and affection for his people.

Because if he won’t fight for them, Lyonesse itself may very well be destroyed…

I love Thea Harrison.   Her strong female characters are amazing. This trilogy featured women that don’t back down from a fight and who insist on battling side by side with the hero.

At the end of Moonshadow (Book 1) Nik and Sophie managed to break through the broken passageway from Earth to the otherland of Lyonesse, the seat of the Dark Fae Court. Oberon, the King, was in a comatose state and they tried to contact Dr. Kathryn Shaw to come to Lyonesse and heal him. Kathryn declined as the was taking care of Pia during her second pregnancy.

The Dark Fae Court has come to New York to approach Dr. Shaw in person. Now that baby Niall has been born, Dragos is willing to let Dr. Shaw go if she wants, and he is more than delighted to bargain on behalf of Dr. Shaw and the Wyr demense for her to go.

Kathryn is up for the medical part of the challenge but she has two bigger concerns ahead of her. Oberon is a both a Wyr and a powerful mage. He put himself into a comatose state to protect himself from the assassination attempt by Morgan la Fae at the command of Isabeau, the Queen of the Light Court, and while he is not fully conscious, there is part of his awareness that is still protecting his body. Oberon is also a powerful weather mage and he is currently freezing the Dark Fae out of their realm.

Dr. Shaw finds that she arrived just in time as the magic is close to reaching Oberon’s heart. Yet she can only make any progress with Oberon when she speaks to him. Whenever she stops, his protections begin to fight her and any attempts she makes at healing him. Despite all of her preparations, Kathryn is freezing, she can’t eat since everything is frozen solid and Oberon’s magic keeps the fires from actually heating anything. She is also growing hoarse from talking so much. She fears whether she will be able to save him before she freezes, starves or looses her ability to speak.

Even unconscious Oberon has a big presence. Once he awakens, you can see why he has earned such loyalty from his people. He and Kathryn have an instant and passionate connection and they are both strong willed people. But the logical doctor analyses everything and this frustrates the man who makes all his decisions with his heart. He wants Kathryn to choose him and Lyonese over her life which she has built over centuries on Earth. More than that, Oberon is used to being an autocratic ruler and Kathryn needs to have a voice in all decisions. Finding a balance between what they both need might be harder on them then trying to rebuild Lyonese after Oberon’s destructive storms.

They also thought they would have time to find that balance before facing Isabeau, but when she crosses into Lyonese wih an army, the decisions must be made that might be too much for the fragile trust building between Oberon and Kathryn and impossible for the weakened Dark Fae people.

After finishing, I re-read Moonshadow (Book 1)  again and noted some things that I didn’t remember since reading it in 2016. Then I re-read Spellbinder, just because I love that one.  All of the women in Thea’s stories are strong but in this series, they really stand out. Sophie, who won’t sit on the sidelines and wait for the menfolk to come to the rescue; Sidonie, a human, kidnapped and tossed into a world of magic but who refuses to leave without first saving the man she loves; and Dr. Kathryn Shaw, a noted surgeon, who won’t agree to mate a powerful King and give up her life unless he too is willing to make some concessions as well.

I am looking forward to what Thea brings us in her next series which takes place in a new otherland.   I just can’t understand why she would name a land “Y”. What is that about?

Like many fairy tales, Kathryn awakens the sleeping King with a kiss…

There was only one good thing about it. The sound of her voice drove Isabeau from his mind, so he focused on her with equal parts irritation and relief.

Then a third thing insinuated itself into his awareness: something was wrong. The woman sounded ragged, her voice hoarse with exhaustion. You would have thought that would be enough to shut her up, but no, it did not.

Then her lips touched his.

And everything hin his head lit up. Yes! This solved all of it…The woman stopped talking and the sensation of her warm, soft mouth covering his drove any thoughts of Isabeau scuttling far into the darkness where they belonged.

Pleasure cascaded through him, but her touch was light and gentle to the point of being chaste, and he wanted more. So much more.

He came fully awake to the sensation of raw hunger. Fixing his mouth on hers, he feasted on her like a man who had been starving for centuries. Warm, wet, and sensual, she kissed him back, and when he demanded more, she gave it.

A wealth of details shouted for attention. She smelled so goddamn good, like everything he had never known to dream about but suddenly discovered he needed more than life itself. Her hair was fine and silken–that meant she would be silken between her legs as well. The thought made him growl, and she trembled all over in response.

He had to taste her, touch her all over, fuck her. Nothing else existed…Admitted, her clothes were very strange, he found as he palmed one breast…but nothing else, and no one else, existed in this moment…

Well, dammit. Now she was back to talking again. It couldn’t detract from the delectable soft skin along her jaw and neck. He ran his lips along the delicate path where her carotid artery beat underneath the warm silken skin perfurmed with the intoxicating scent of aroused female.

He couldn’t wait to eat her up.

Something struck his shoulder.  Her fist. She had hit him.

She struck him again, not lightly, then she clouted him over the head. “Oberon, stop!”

She dared to strike him? He bared his teeth at her in a snarl, and out of the corner of his eye he saw her draw back her fist. Unbelievably, she was going to do it again.

He hissed. “You do not strike the King!”

“You’re not my King!” she shouted back.

He caught a glimpse of her fine-boned features surrounded by a cloud of the silken brown hair spread out on the pillow. Fire flashed in narrowed amber eyes. This time her fist came flying directly at his face, but his reflexes were faster than they had ever been, and he ducked sideways to avoid the blow that landed on his shoulder.

Outraged, he pulled back his own fist to strike back. That was when he discovered she was as fast as he was and quite strong. For one moment all his weight was poised on one elbow and with a neat, whole-body heave, she shoved him over, hard.

As it transpired, they had been tussling close to the edge of the bed. Flipping over, he landed on his back. As the back of his head connected with the hard, frigid floor, full awareness slammed into him.

“Look,” the woman croaked. “I am so, so sorry for this There’s been–I don’t even know what to call it–a massive misunderstanding. I’m sure you’ll understand everything once I explain everything…”

He barely heard her as memories cascaded through his mind. The attack at the masque. The poisonous spell that he could tell was even now still working through his body. Saying goodbye to his court and casting the statis spell. The slow, raging collapse into darkness.

He surged upward with an outraged roar that shook the walls, and his anger propelled him into a shapeshift. Changing into a lion, he sprang at the woman. That satis spell had been the only thing standing between him and certain death. He would disembowel the interloper for daring to disrupt it…for sex?

He got one glimpse of her mortified expression as he leaped, claw out and ready to strike. His front paws closed on thin air as her slender body melted away.

There was a rush of wings. He caught colors out of the corner of his eye-dark brown, black marking, and soft, mottledgray and white, as well as the slender, wicked length of a hooked beak and strong, hooked talons. The interloper was a full Wyr, a falcon.

Cupping his front paws, he twisted his massive body in midair to try to catch her as she flew past him, but she dipped her body so sharply the tips of her wings brushed against his whiskers.

Roaring again, he leaped and rebounded off the nearest wall, cracking plaster as he lunged for her again. He had speed and power in spades, but she was much smaller than he and could move like greased lightning.

She flapped around the room so chaotically it was maddening. Growling he tried to follow, uncaring for how he knocked items over or how the strong, well-built furnigue fractured under his weight. For one faction of a moment he thought he had cornered her–but then she dodged successfully again. This time he got the chance to look into the falcon’s eyes as she passed by. She looked as furious as he felt, and as she streaked between his outstretched paws, she reached down to rake the claws of one foot along the tip of his lion’s nose.

One response to “Review: Lionheart by Thea Harrison”