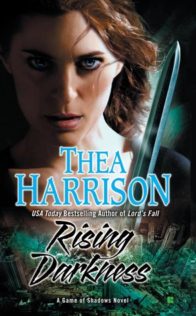 In the hospital ER where she works, Mary is used to chaos. But lately, every aspect of her life seems adrift. She’s feeling disconnected from herself. Voices appear in her head. And the vivid, disturbing dreams she’s had all her life are becoming more intense. Then she meets Michael. He’s handsome, enigmatic and knows more than he can say. In his company, she slowly remembers the truth about herself…

Thousands of years ago, there were eight of them. The one called the Deceiver came to destroy the world, and the other seven followed to stop him. Reincarnated over and over, they carry on—and Mary finds herself drawn into the battle once again. And the more she learns, the more she realizes that Michael will go to any lengths to destroy the Deceiver.

Then she remembers who killed her during her last life, nine hundred years ago…Michael.

I did not finish this book. I just couldn’t. I read the first 200 pages or so and had to force myself to read that much. I am sorry to sound so harsh. I really love Thea’s Elder Races series, so I wanted to like this one too. But this one was just too much in the way of set up and I didn’t enjoy any of the story I read. I knew by page 200 that there was no reason to finish since I had no desire to pick up the next books so why bother with the set up.

The basic premise of the story is that several beings–soul mates (I wasn’t sure if they were aliens, angels, or what) took a poison so that they would be re-born as human and follow the Deceiver to earth. For 6,000 years they have been reborn and once they finally reclaimed their memories, which they would do gradually while they grew up, they would then try to locate each other and then the Deceiver and try to kill him. 6,000 years? Not doing such a great job so far. While the beings lost time being reincarnated (every time the deceiver killed them), the Deceiver skipped all that by stealing bodies, killing the existing soul and slipping into that new body with his memories in tact.

There was the physical plane, the spiritual plane, all levels of life and we had to watch as they reclaimed their memories of their past lives so they could move forward with the new one.

I didn’t see any indication that they even inconvenienced the Deceiver over the 6,000 years.

Sorry. Neither the storyline nor the characters drew me in at all.

One response to “Review: Rising Darkness by Thea Harrison”