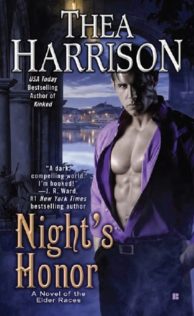 On the run from her former employer, Tess knows that she’s vulnerable on her own amongst the Elder Races. That’s why she decides to audition to become the human attendant of a powerful Vampyre of the Nightkind demesne. But while her position affords her the safety she seeks, her protector turns out to be more than she bargained for.

The right-hand man of the Nightkind King, Xavier del Torro is both terrifying and alluring. While his true nature frightens Tess, she can’t ignore the appeal of his innate sense of integrity and self-restraint. Thrown into Xavier’s world, Tess must quickly learn to navigate the dangers—both to her life and to her heart. But the biggest threat comes from her own past.

On the night of the Vampyre Ball, Tess Graham joins the hundred of hopefuls who want to be accepted as a vampyre’s attendant. They would trade their services and their blood to a vampyre master whose bite would give them decades more of life and youth. But Tess isn’t there to be part of the glamorous life of the vampyres. She doesn’t want to be bitten either. She just needs protection of a member of the Nightkind to protect her from the wrath of a pariah Djinn who will kill her if he finds her. Her only hope is that he will not risk an inter-demnse war with the Nightkind over a lowly human no matter she did. It’s not much of a hope, but it’s the best plan she has right now.

What she never would have expected is for Xavier del Torro to offer her a position in his household. Xavier is a very dangerous vampyre. He’s the right-hand and friend of the Nightkind King, Julian Regillus.   Xavier’s transformation story is the stuff of legends and nightmares. She couldn’t ask for a more powerful protector, but if he knew why she wanted into his household, he might kill her himself for endangering his people.

Tess just has one more very important problem.  She’s afraid of vampyres. Knowing that these predators could attack and kill her before she ever realized they moved is effecting her ability to spend time in the presence of her new boss. She hasn’t been able to bring herself to make the blood offering required and therefore she hasn’t gained the ability to heal faster or move faster and her ability to train with the other attendants is suffering.  Xavier’s head of security is trying to get rid of her and he doesn’t seem to like or understand Xavier’s interest in Tess.

Xavier likes Tess’s ability to think for herself. He just needs her to understand the difference between thinking for herself and making mistakes that could get people killed.  Xavier knows how to use her mistakes to improve her ability to work with the others. But he is still having trouble getting Tess to spend time with him without reeking of fear, and unless she can give a blood donation before the end of their trial period, she will have to leave.

THOUGHTS:
This was the first Elder Races story which focuses on the Nightkind. Yes, we did have Carling’s story, but at that time, she was sent to live in isolation so we were truly not given the basic running of a vampyre household and their attendants. It was an interesting peek at how desperate people are to achieve that longevity and glamour of the vampyre lifestyle and get a chance to someday be transformed themselves.   We also see how the attendants work together to take care of the household and, at least in Xavier’s household, train to protect the master and each other.

Tess and Xavier are both characters with a strong moral code which is why Tess needs protection.   I like that Tess is afraid but she doesn’t allow that to govern her actions.  Her body says run from the vampyre, but her brain refuses to back down from him.

Sadly, we don’t get to much romance until the last third of the book.  Xavier brought Tess into his household because she is intelligent, she has spirit but she is not the usual glamorous-type who would desire to be an attendant.  He wants to use her for spying on some of the other vampyres and going undercover.  His hope is that her average looks will help her stay below the radar of the other vamps.  It is interesting that the longer he knows Tess the more he determines that her looks are too striking for her to go unnoticed.  He also knows that until she can overcome her innate fear of vampyres, he can’t put her in a situation without him.

The why of the lack of romance is again Xavier’s strong moral code.  He will not allow himself to compromise an attendant in his household and under his protection.  It is not until Tess is no longer technically an attendant, that he grabs her for a kiss and they move forward as a couple.

I loved Xavier and Tess and truly enjoyed their story.  The Elder Races is a great series for anyone who loves paranormal romance.

Oh, for crying out loud. This was like some kind of modern version of My Fair Lady.

She made herself breathe evenly for a few moments. “You’ve made your point.”

“Have I? How fortuitous.” As he lounged back in his chair, all the subtle signs of aggravation disappeared. “Then perhaps we should get back to the task at hand, so that I can determine what you have learned before going on to teach you what you haven’t.”

Okay, that went too far. One small part of her mind—the wary part, the sensible part—started to whisper, Don’t say it, don’t say it…

But the rest of her was too exasperated to listen. She flung out her hands and opened her eyes wide. “Who says ‘fortuitous’ these days?”

He just looked at her. The slanted angle of his mouth had returned, as well as the slight snap to his diction. “Apparently, I do. Now, if you are quite through, it might behoove you to remember that a successful attendant is nowhere near this argumentative with her patron.”

The devil took her tongue. There was no other explanation for it.

The angle of his mouth leveled out, and his voice turned exceedingly, dangerously soft. “Yes. Behoove.“

She opened her mouth. Shut it. Opened it again. Don’t say it…

Gray-green eyes narrowed, daring her to cross the line.

Then the rest of what he had said sank in.

A successful attendant. Meaning, of course, that she wasn’t a successful one. She wasn’t anywhere near it. She wouldn’t let him bite her, and she couldn’t keep her mouth shut.

Was this what he had meant when he said that some people couldn’t settle into the lifestyle of attendant, even when they wanted to?

Discouragement sagged her shoulders. With a groan, she bent her head, and put her face in her hands. “I’m sorry. I’m failing completely at this, aren’t I?”

Xavier covered his mouth with one hand as he regarded Tess’s dejected figure. “I don’t know that I would quite say you’re failing completely.“

“Thanks,” she said, her voice muffled. “I find those words so encouraging.”

Review: The Wolf Within by Cynthia Eden
« Our Broken Sky by Sarah Harian
Review: A Curse Awakened by Cecy Robson »