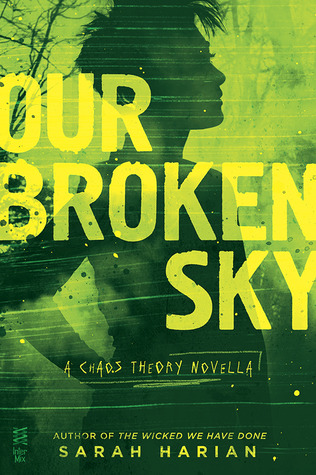 ORDER A COPY: Our Broken Sky: A Chaos Theory Novella

In The Wicked We Have Done, readers were introduced to Valerie Crane. But you don’t know her the way you think you do. This is her story…

Valerie has always been different from her identical twin Veda. Tattooed, fiery, and foul-mouthed, Valerie acts on instinct, getting even with anyone who wrongs her passive and sensitive sister.

At twenty-two, Veda doesn’t want to seek revenge against the three young men who raped her. As for Val…

As far as Val sees it, the Compass Room is simply a quicker way for her to die—payment for the crime she feels no guilt over. There isn’t a reason to fight, not until a girl as broken as she is reminds Val of what it’s like to hope…

This is a short novella to accompany the novel, The Wicked We Have Done, which was released back in March. It is a series noted as a cross between The Hunger Games and The Running Man.  The Chaos Theory series involves The Compass Room which judges criminal which have been convicted of murder. They can serve out their sentence or face possible death in the Compass Room.

One of the characters in The Wicked We Have Done is Valerie Crane. She was convicted by circumstantial evidence of the death of the three men who date raped her twin sister. Where TWWHD was told in first person by Evalyn, in this novella the story is told first person by Valerie.

I honestly don’t believe this novella was necessary. We had the idea that Valerie was guilty of her crime and she believed her crime to be justified. We get a few more details and we start the story just before her sister is raped and get a hint of family dynamics between her sister and her father and we understand a little bit more of the hows and whys.

During the first book the characters shared some information of themselves and their crimes. We also got a better understanding of their characters by watching how they interacted with each other and helped each other survive the CR.

I expect a novella to either provide a subcharacter with a story of their own or to push the plot forward. This novella really didn’t really push the story forward. Neither was this a true subcharacter story since we simply rehashed most of the information gleamed about Val already.  Other than filling out the character of Val, who we already had a good understanding about and other than allowing her a few lesbian love scenes, it just wasn’t necessary. We could have had all the same tidbits of information told at the campfire during Book 1.