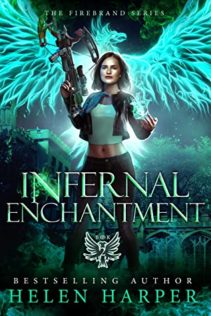 A gruesome case of grave robbing lands on Detective Constable Emma Bellamy's desk. But is there more to it than meets the eye?
Being the sole police detective in London's Supernatural Squad is no easy task. I have to navigate my way through a world teeming with supernatural creatures, from vampires to werewolves and everything else in between. My inexperience might count against me but my own shocking supernatural abilities will stand me in good stead - especially when I'm confronted yet again by the gruesome spectre of death...
A vampire has been mysteriously killed in the centre of the city.
Werewolf graves have been plundered for their bodies.
And I think I might be developing an ill-advised crush on a certain black eyed vampire Lord.

Detective Constable Emma Bellamy is now in charge of the Division known as Supe Squad and she is still feeling her way around the supernatural community. No one knows what Emma is, including Emma but since she has raised from the dead, more than once, and not in the vampire way, she obviously isn’t 100 percent human. The Supes aren’t sure where Emma fits in their hierarchy. She is in charge of the Supe Squad and the supes aren’t a big fan of the humans governing over them. So with a big question mark over her head, it isn’t surprising that all of the supernaturals seem to be trying their luck with her in the supernatural equivalent of daring your friends to go up the spookiest house on the block and ringing the bell.

In the prior story, we met Lord Lukas Horvath, the head of the vampires, and we know he has an interest in Emma beyond politics, or does he? Emma has spent a lot of time with Lukas but according to the werewolves, and just about everyone else, Lukas’s interest might not just romantic in nature. Vampires are all about acquiring wealth and supremacy over their fellow supes, so of course he must want to get in close with the head of Supernatural Squad. But Emma is confused because Lukas was so helpful and concerned for her in their first meetings. She can’t believe that he just wants to spend time with her for favoritism especially since he seems to hurt when Emma turns distant.

Lukas isn’t the only one trying to get close with Emma. Some of the werewolf clans are trying to help Emma wade through supernatural politics and even to help her figure out her own supernatural background. So who actually wants to be Emma’s friend and who wants to know how to use her, is a big question.

Emma also crosses paths with Devereau Webb, a local crime boss, who is trying to get the werewolves to turn his little sister who is dying of cancer. Turning a child is forbidden, which leads Devereau to get more desperate and more creative ways of putting pressure on the supe community. (Devereau Webb is now the focus of a spinoff series, the first book is The Noose of a New Moon.)

Emma and Lukas also stumble on a book called Infernal Enchantment . There are very few copies in print which is a good thing because a lot of the information and magical spells in it aren’t things that your average human, or even supes, should be playing with but they were hoping to find something that might help Emma figure out her own supernatural abilities. Oddly, even though this isn’t a book they want people to find, Emma seems to be telling everyone about it and where there is a copy under lock and key.

I enjoy this series and look forward to reading more. It’s a fun combination of the supernatural and police investigations.