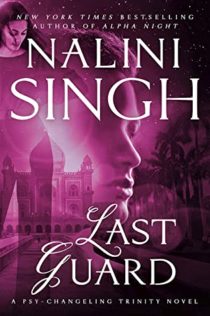 New York Times bestselling author Nalini Singh returns to a world devastated by change in her award-winning Psy-Changeling Trinity series, where two people defined by their aloneness hold the fate of the Psy in their hands…
Termed merciless by some, and a robotic sociopath by others, Payal Rao is the perfect Psy: cardinal telekinetic, CEO of a major conglomerate, beautiful—and emotionless.
For Canto Mercant, family and loyalty are everything. A cardinal telepath deemed "imperfect" by his race due to a spinal injury, Canto cares for the opinions of very few—and ruthlessly protects those he claims as his own. Head of intel of the influential Mercant family, he prefers to remain a shadow in the Net, unknown and unseen. But Canto is also an Anchor, part of a secretive designation whose task it is to stabilize the PsyNet. Now that critical psychic network is dying, threatening to collapse and kill the entire Psy race with it.
To save those he loves, Canto needs the help of a woman bound to him by a dark past neither has been able to forget. A woman who is the most powerful Anchor of them all: Payal Rao. Neither is ready for the violent inferno about to ignite in the PsyNet…or the passionate madness that threatens to destroy them both.

I enjoyed this new addition to the series.

In the Psy-Changeling series, we have seen that under Silence, the Psy was a race so focused on attaining their new ideal of perfection and breeding out flaws, that they orchestrated their own demise. For the last several books we have seen the Psy, the Changings and the Human Alliance working together to try and stitch together the broken Psynet because without the mental feedback from the Psynet, the Psy will all die instantly.

In the aptly titled Last Guard Nalini brings us back to one important group that made an appearance earlier in the series but no one really remembered their importance to the structure of the Psynet: the anchors, and that it is the anchors whose job it is to anchor the substructure of the Net. Many, many books ago, one terrorist faction was focusing on finding and killing anchors, who mostly keep themselves secluded. When the terrorists found them, they were able to kill thousands of Psy as killing the anchor thereby destroying entire sections of the Net before another anchor could stabilize that section.

Both the readers and the new Psy Coalition have put the importance of anchors into the back of their minds and have all but forgotten how important they are until now. The Coalition has been focused on healing the rot in the Net never realizing that the substructure is dangerously close to collapse. This is simply because Anchor children do not “initialize” right away and they appeared to be duds with other lower grade talents. Silent parents seeking perfect and powerful Psy children were unhappy with their duds and sometimes those duds had unfortunate “accidents.” Since these children were never allowed to grow up and fill their roles as anchors, the numbers of anchors holding together the Net are few and it appears that the remaining few are all suffering severe health problems, including tumors, because of all the pollutants in the decaying web.  We have also learned that a percentage of anchors have a tendency to be psychotic, such as former Psy Council member Santano Enrique.   Is that also caused by the decaying Net flowing through them?

Canto Merchant and Payal Rao met as children at an institution they were both placed into due to their unfortunate lack of gradient in their abilities, known only as 3K and 7J, they formed a bond in blood protecting each other from their jailors but they lost each other after their battle to stay alive.  Canto is bringing together as many anchors as he can to create their own focus group and demand a seat on behalf of the anchors at the ruling Coalition’s table and to be part of the decisions needed to save the Net.   Canto is wheelchair-bound after tumors took the use of his legs, something that would have gotten him killed if he wasn’t a Merchant, as Ena, the matriarch of the Merchant Clan, fiercely protects her family regardless of imperfections.   Canto wants Payal Rao, the head of the Rao Conglomerate to be the face of the anchors for both the public and the Coalition. Payal is reluctant to trust Canto until she realizes that he is the boy she only knew as 7J and someone she can trust with all her secrets.  It doesn’t take long for that trust to form an even deeper bond between them. But Payal has to be very careful, she might be the outward Leader of the Rao Conglomerate but her father holds her leash in the form of a drug Payal needs to keep the tumors in her head from expanding. If her father knew that Payal’s interest in the anchors was anything other than a chance to sit at the big table, he would demand she return home and focus on the family business.

I love seeing what an author does with imperfect heroes, and especially in the world of the Psy where perfection is required. Canto may be in a wheelchair but that doesn’t stop him from being a powerful member of the Merchant family and rumored to be the reason the Merchants dig up so many hidden secrets.  I also love that since Canto’s house is located on the edge of the woods near the StoneWater Clan’s Denhome, we get to spend part of the story with the bears.  I love those bears!

Last Guard was an interesting new twist in the same problem we have been working on for the last several stories, and who couldn’t love Canto and Payal, two damaged souls who yearned to find that one person who meant so much to them.  They finally found each other again and their bond is so much stronger than their silence.

A flicker of movement to his left had him jerking his attention that way. The last thing he expected to see was a small bear with dark brown fur climbing up the balcony strut to reach the beam at the top. Seeing him, the little bear made excited sounds and jumped onto the balcony before running over to him.

The doors were still open, so the cub ran right in.

Heart thundering–this level of his home was high above the ground–Canto leaned down and scooped up the small, furry weight. “What are you doing here?” He nipped the cub’s ear as he’d seen Valentin do; he needed the outlet for his fear, but he made sure not to do it too hard.

The cub made more sounds and snuggled into him.

Holding the cub’s warmth against his chest, Canto forced himself to breathe. What if Payal had been here when this happened? She’d have realized they were in bear country. He knew she wouldn’t have used that information in any ugly way, but he still needed to let Valentin know.

The only reason he’d invited her here was that Denhome was some distance away. Just because he’d decided to move closer to his cousin didn’t mean he actually wanted to live with bears who didn’t know the meaning of personal space.

He’d once put out a sign saying: I don’t want visitors.

It had been replaced by a sign that read: “We’re not visitors. We’re bears.

But baby bears were not allowed out alone in this public-accessible area.

He stroked his hand over the small bear in his arms. A bear who’d begun to tremble. “I have you,” he said roughly, patting its back–he was no expert in affection, but he had eyes; he’d seen how Chaos handled Dima, how Valentine interacted with all the cubs.

“I’ll get you home.” He opened the buttons of his shirt so the cub could lie against his skin–such contact was important to changelings, especially such a small and scared one. “You know you’re safe.” He couldn’t yet recognize most bears in their bear form, but he knew the child must’ve met him when he’d visited Denhome.

Even a lost, scared changeling child wouldn’t have run so joyfully toward a stranger. Kid must’ve caught his scent by the house, come toward it out of panic.

“Come on, let’s go call your pack.” It came out rougher than he’d intended, but he cub didn’t flinch. Used to grumbling bear voices, it snuggled closer to the vibration of his chest and dug small claws into his chest to hold on–but the child was careful not to pierce his skin. This was someone’s baby; they’d been taught their manners.

Spotting the food at that instant, the cub made hungry sounds but didn’t pounce.

He put he cub on the sofa. “Sit here. I’m getting something.” He was aware of the cub getting to its feet and watching him over the top of the sofa as he went into the kitchen. All the counters in the space were hydraulic, so they could be raised or lowered at will. Mostly, they stayed set to the levels he preferred, but the system gave him the flexibility to accommodate Arwen–his cousin loved to cook. Not that a lack of customization had ever stopped Arwen; at Canto’s last place, he’d just gone ahead and bought himself a riser that he’d place on any surface where he wanted to work standing up.

Now, Canto grabbed the jar of hazelnut-chocolate spread that same stubborn empath had bought him. He’d tried it once and nearly died from the sugar overdose.

But he cub jumped happily when he held it up.

Satisfied he was handling this in a way that wouldn’t traumatize the hid, he went back around and shifted himself from his chair to the sofa. The cub immediately snuggled itself to his side, where the child waited patiently while Canto put the spread on a piece of toast.

The cub ate neatly after Canto offered it to him.

He was about the dig out his phone when a much larger figure jumped onto his deck.

Canto was ready to strike out with his mind, the protective urge pure instinct born of a time when he’d protected another child, but one glance and he stood down. He didn’t much know what to do with small bears, but the man who entered the living area the next second was an expert.

3 responses to “Review: The Last Guard by Nalini Singh”