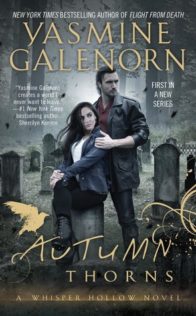 [box style=”rounded” border=”full”]This was a good beginning of a new series although I would have preferred to save the family mystery for the second book and just focus on Kerris’s gift of Spirit Shaman. We did not spend enough time out of the cemetery. [/box]

Yasmine Galenorn takes us to the town of Whisper Hollow, Washington. A place where everyone who lives there knows about the odd happenings about town. In fact, the children are raised saying the rules each morning like the pledge of allegiance.

1. If you hear someone call your name from the forest, don’t answer.

2. Never interrupt Ellia when she’s playing to the dead.

3. If you see the Girl in the Window, set your affairs in order.

4. Try not to end up in the hospital.

7. And most important: Don’t drive down by the lake at night.

Kerris Fellwater left Whisper Hollow fifteen years ago. She loved her grandmother dearly, but her grandfather was a real bastard and she simply needed to get away from him. Deep down she knew she would have to return one day. Her family were children of the Morrigan and her grandmother was a Spirit Shaman, just like Kerris. A Spirit Shaman helps the spirits of the dead cross over the Veil. She will also round up the ones who refuse to stay there and help persuade them to go back.

A Spirit Shaman is helped by a lament singer and she usually given a shapeshifter protector. When Kerris returns to Whisper Hollow after the Lady of the Lake claimed her grandparents, she knew Ellia would help her by playing the spirits to rest with her violin but she didn’t know if she would ever find her protector and if, like many of the Shaman/protector couples, he would be her soulmate.

Once Kerris returns, she finds that while the spirits need help finding their way, secrets in Whisper Hollow are buried much deeper.  Kerris was always told that her father ran away when he found out her mother was pregnant and that her mother abandoned her and ran away to be with her father, but was that the truth?   When Kerris see’s her mother’s spirit, she knows that stories told to her were just that…stories and lies.  Her mother is dead and Kerris will do everything in power to dig up this ugly secret.

Kerris meets her very handsome, new next door neighbor, she finds he knows quite alot about spirit shamans and their protectors.  Can it be too much to hope that the spark between them means more than neighborly attraction?

From the moment she arrives, Kerris is surrounded by old friends, but can they all be trusted and Kerris is going to keep as many secrets to herself until she is certain who is friend and who is not.

THOUGHTS:
This was very interesting world building and I have a feeling it follow the same lead as her other stories, although I have only read two others.   My only critique here would be that as an introduction story to a new series, I would have liked to have focused more on getting to know more about a Spirit Shaman and to have gone along with Kerris to the cemetery more than we were able to do in this book.

Kerris’s time was split between rekindling new friendships, making a new one with Bryan, next door, clearing out and searching her grandparents house for her grandmother’s spirit shaman diaries and searching for her parents murder.   There are some things which were only touched on in this story, such a while she met the gatekeeper of the veil, she never had her new-shaman-in-town meeting with Veronica, who controls the undead, and exactly why she is does that.  We also don’t really deal with who has been raising the spirits and stirring up the evil that lives in the woods.  There was a lot to learn here and I feel like we only touched on it.

I think that we could have saved the whole Kerris sorting out her family secrets, or at least the murders, until the second book and we had a more sturdy foundation of Spirit Shaman, what they do and what kind of powers they hold.

We only get a glimpse of the possibilities of this series but it has a lot of potential and a lot of story plots to work with.  I hope we will get to work with Kerris and understand Spirit Shamans a little more after Book 2.

This is why you never want to go into the hospital, evil spirits can drain your weakened energy and you will die not from your illness and injury, but from an evil spirit stealing your aura.

I gripped the wand in one hand and the fan in the other as Corbin opened the door for us. I stepped into the room first, Ellia following me, her bow flying over the strings. The room seemed oddly out of phase–a blur of two worlds colliding.

The man in the bed was hooked up to so many machines that he looked cybernetic. I stared at him, gauging his energy. A swirl of mist seethed around him, exiting his body as Diago drained him. I followed the trail of mist and vapor and found myself turning to the far corner. There, crouched in the shadows, was the Scuffler under the Bed.

He was tall and long, gaunt, like a walking stick insect or a walking skeleton. His skin stretched over the bones, paper thin and flaking and covered with rashes and sores. Diago’s eyes sank into the sockets, dark purple circles bruising his cheeks beneath them. He wore a top hat over long ratty hair that coiled down his back. He wore no shirt, showing his long jointed arms, and his ribs pushed against this chest. His pants were so loose that they barely stayed up, kept on by a belt cinched to the last hole.  Diago’s tongue flickered out like a lizard’s as he inhaled the stream of energy coming from the man in the bed. He sucked it in with a greedy smile.

Diago suddenly seemed to realize I was watching him. He slowly rose, standing on the tips of his toes, and leaned backward from his waist at a ninety-degree angle as he twisted his head to hold my gaze. His gaze was hypnotic and beckoning. As mesmerized as I was repulsed, I found myself stumbling forward a few steps, before Bryan’s warning echoed in my head and I managed to stop myself.

“Hold steady”–a whisper behind me. Ellia changed her song and a dark melody poured out of her violin. The music energized me and I could hear the cawing of crows at my shoulder. Averting my eyes from Diago, I focused on the wand and the feathered fan. The crows screeched in my ear. Holding up the fan, I swept it three times. A faint breeze sprang up, crackling around him. I could see pale sparks light the rippling air that had come from the fan. The shriek of crows grew louder.

Diago pulled back with a hiss. “Spirit shaman…” His words flew by on the crackle of autumn leaves and he crouched, tiptoeing toward the bed. “Leave me with my prize.”

“You cannot destroy me, spirit shaman.” Diago’s eyes gleamed with the glow of decay and forest mold. A cunning smile crept across his lips.

“No, but I can cut off your supply, you freak of nature.” I pocked the fan and, with my right hand outstretched, I moved forward. I thrust my left arm into the air, holding the wand high. Ellia’s music shifted again, her violin emulating a drumbeat.

Diago flared at her. “Old woman, go home. Leave me to my feast or one day I will come for you.”

I stopped between them. “Not as long as I stand as spirit shaman in this town. Go home, Diago. Go home to your nest and hide in your lair, nursing your hunger!” The force was building, though I had no clue where I was drawing it from. But, as with Betty’s spirit in the cemetery, I could feel the power rising. I jumped toward him as a bolt of energy spiraled down my wand, into my body, and out my other hand. Focusing it squarely at Diago, I let loose a pale mesh of violet light to wind around him like a lasso.

He screamed, struggling as he backed away from the bed. As the light faded, he turned back to the patient and a huge crest of mist rose form Mike’s aura. This would finish him off if I didn’t stop Diago. Not knowing what else to do, I rushed forward and slammed the tip of my wand against his back.

Instead of passing through him like it would most spirits, the wand hit solid flesh.

Diago roared, spinning to face me. He loomed over me and I cringed, suddenly aware that I was out of options. Grabbing me by my right wrist, he squeezed and I cried out as the bones began to give under his unnatural strength.

“I will teach you what it means to disrupt me, girl…”

Diago’s tongue flicked out, long and snaking. As it touched my cheek, a burning pain knifed through me. I screamed.