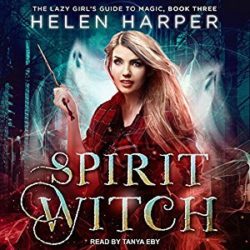 If anyone appreciates what it means to be dead to the world, it's Ivy Wilde.

Barely recovered from her brush with necromancy, Ivy is flung once more into a world of intrigue, adventure and potential death and disaster. It's not her fault - it just so turns out that she's now the only person in the entire world who can communicate with the dead. And they're a chatty bunch with a list of demands.

When the ghosts offer information about a witch-hating mass murderer in return for Ivy's help, she has no choice but to get involved. She might be getting herself into more trouble than she realises though - and that's even before she's dragged to Sunday dinner so she can meet Winter's family...

Although there is a novella which came out last year, I am sad to stay this is the last book of the series. I definitely want more Ivy.

Note:  This will have some spoilers from the last book.

Ivy survived her ordeal with the necromancer. Maybe because he was so young or maybe because he didn’t completely cross into the darkness, but it really doesn’t matter. Ivy is alive but she is slowly going out of her mind.  Maybe it is because she can now see spirits (a side-effect of absorbing the necromacer’s magic?) but more likely it is because Adeptus Exemptus Raphael Winter, or former Adeptus Exemptus, won’t stop cleaning her apartment. Raphael resigned from the Order after they risked Ivy’s life, but now he doesn’t know what to do with himself and it is definitely making Ivy crazy. Ivy is ready to forgive the Order for using her.  Heck, she feels better already, and she wants Raphael to do that same and be reinstated for his own sanity, and hers as well.  She just needs to get him to realize that he needs the Order as much as they need him.

Ivy already has enough on her plate trying to drag out her recovery time.  I mean, really, I girl doesn’t want to rush the pampering from her boyfriend.   But now that it is getting around that she can see ghosts, the spirits are harassing her to help release them from their earthly bonds, or something like that.  They really should wait for a commercial before they start bothering her after all.    The first Ibsissimus’s ghost sends her out into the woods to speak to the ghosts of a coven of witches.  Their killer managed to take out the whole coven in one sweep and their magical counterattack had no effect on him. How could that even be possible?

Ivy is now in the middle of an investigation with no bodies and no evidence, and everywhere she turns there are more and more ghosts popping up wanting her to help them lift their curses so they can go into the light. They are so annoying and Ivy is starting to understand why they were all cursed in the first place.

But none of that is getting her any closer to the murderer. Winter and Ivy are tracking down any leads they can find but if the killer really is able to nullify magic, they need to warn an Order.  How do you convince an Order full of witches, whose first inclination is to throw spells, that they might not be able to defend themselves?

I am sorry to say that this is the last novel of the series. (There is a Christmas themed novella.)  These stories were fun and quick reads.    I already miss Ivy.

“We can help you,” I said eventually.

The barman stood up, abandoning the splattered hotpot in favor of looking at me warily. “How?”

“This pub is haunted.”

He took a step backwards. “Excuse me?”

I glanced at the ghost. “What’s your name?”

“By your great-uncle Willie,” I said to the barman.

“William!” the ghost howled. “Not Willie!”

“Well then,” I snapped, “you should have kept your willie inside your damn trousers then, shouldn’t you?”

Both Winter and the barman started. “My great-uncle was known for exposing himself,” the barman said, staring at me.

I raised an eyebrow in Willie’s direction. That figured. The ghost pretended to be suddenly fascinated by a stain on the old flocked wallpaper.

“How did you know that?” the barman asked. “It’s supposed to be a family secret.”

“I told you,” I said patiently. “This place is haunted.”

“Actually,” William declared loudly, “that’s because the silly woman in the kitchen keeps forgetting to put it in the fridge and she leaves it out next to the oven.”

I focused back on him. “Why are you here? I’m going to assume it’s not just because you want as many people as possible to see your poor excuse for a penis.” Winter started and, predictably, his expression grew closed and angry. He stayed quiet, though; he knew I was a big girl.

William sniffed. “The family always hated me. They were jealous. My sister despised me so much that she cursed me to find no rest, not even in death, unless I promised to name her as my sole heir when I died. She was a money-grabbing whore who–“

“Shut up.” I glanced at the barman. I wasn’t entire sure how all this was supposed to work but how hard could it be to rescind a generations-old curse that transcended death? “One of your ancestors cursed ol’ Willie to find no rest unless she was given his stuff when he died. I’m presuming that she didn’t do that. I guess that to get rid of him and allow him to pass to the next plane, where he’s supposed to be, you just need to take back her words.” I shrugged. Maybe. What the hell did I know?

That barman scratched his head. “Are you trying to fleece me or something?”

“Nope. This is for real. I promise. All I want in return is to get into that room.”

He was obviously still suspicious and on edge. He sidestepped and, in the process, slid in one of the small pools of splattered gravy. Winter reached out and grabbed him just before he went crashing to the floor.

“Ivy is a pain in the arse,” Winter said gruffly.

He flicked me a look. “It’s true. You’re the laziest person I’ve ever met. You’ll take shortcuts wherever you can and you never do anything the way it’s supposed to be done.” He smiled and my heart flip-flopped. “But you’re honest to a fault. You don’t lie and you wouldn’t deliberately hurt someone.” He paused and I knew he was thinking about what I’d done up on Scotland. “Not unless you really had to, anyway.”

“So, ridiculous as it sounds, you finally forgive me for sacrificing myself for you?”

Winter’s expression was earnest. “Yes. But don’t do it again.”

“I’m not sure I can promise that,” I said with a wry grin.

He leaned toward me. “Maybe I can make you.”

“By flashing those sexy blue eyes at me? By kissing me until…”

Both Willie the ghost and the barman cleared their throats at exactly the same time. Oops. I’d completely forgotten they were there. I coughed “Sorry.”

“That’s alright.” The barman stared round the room as if expecting Willie to jump out at him at any moment. “William Barcel. I, er, take back what my ancestor said. She was wrong to want all your money and she shouldn’t have cursed you. You are now…” He scratched his nose.

Willie’s eyes went round. “Really? I can pass on? I don’t have to stay here? Thank you!” He blew me a kiss. He leapt over to the barman and tried to hug him. It didn’t really work because the barman couldn’t see or feel him but the sentiment was nice.

Willie pulled back and looked around. “I’m ready to go now!” he called out. “Where’s the light?” He swung his head in every direction. “I don’t see it. Where am I supposed to go?”

I considered the matter. “I think,” I said, “that Willie has been telling a few porky pies.”

“Then why are you still here?”

He appeared momentarily nonplussed. “I don’t now.” Fear crossed his face but was quickly replaced by fury. He jabbed the barman, who as looking perplexed by my one-sided conversation, in the chest. “You didn’t mean what you said! You’re the reason I’m still here!”

“You can shout at him until you’re blue in the face,” I said calmly. “He can’t hear you. Why don’t you go back to the beginning and tell me why you were really cursed?”

“I did tell you!” Willie shrieked.

“Are you absolutely sure?”

He glared at me. “Fine,” he mumbled. “His great-grandfather,” he said, without looking at the barman, “said that if I showed my…parts to anyone else, I’d be damned for all eternity. It’s the only other curse I can think of.”

“And you ignored him and exposed yourself?” I probed.

“Only a few more times.”

I didn’t say anything.

Willie sighed. “Maybe it was a lot more times.”

I folded my arms. “I’m not sure you should be allowed to pass on. I image you caused considerable distress to those poor people who had to see…” I gestured town at his crotch. “…that.”