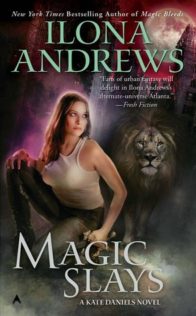 [box style=”rounded” border=”full”]Kate Daniels is quickly becoming one of my favorite urban fantasy series. I am back to audiobooks on this series and I do enjoy the narration. [/box]

Kate Daniels has resigned from the Order of Merciful Aid, and has used her years of experience as a Merc and from training and working at the Order to opened up her own investigation firm. Things are going…slow. Kate isn’t sure if it just the usual problem starting a new business or is her new status as mate of the Beast Lord causing clients to shy away.

The slow business is giving Kate plenty of time to fret about the fact that her ward, Julie, has run away from school again and that Curran’s trackers haven’t been able to find her yet.

When Kate received a call from Ghastek that one of the People’s vampires is unpiloted, on the lose and headed in the direction of Kate’s office, well…she didn’t have anything better to do anyway. Kate manages to lasso the vamp, but a loose vampire brings out the supernatural version of SWAT running. The PAD’s idea is shoot first and identify the pieces later, especially when they have all those really, big guns to fire. PAD’s involvement isn’t going to help the situation and they aren’t happy when Kate steps between the vamp and their fun. Everything was under control until Ghastek suddenly takes a nosedive and passes out, losing control of the newly captured vamp. The PAD opens fire on the vampire and Kate, Ghastek and his people could quickly become collateral damage.

The quick arrival of Kate friend’s Andrea, retired Knight of the Order and bouda shifter, is the only thing keeping Kate and the others from becoming expendable casualties of the PAD. But there is still something niggling in the back of Kate’s brain, how did the vamp lose its pilot and what caused Ghastek to faint after he took control? Ghastek and the People aren’t real good at sharing information.

As if her morning hasn’t been exciting enough, Kate does get her first client, The Red Guard has shown up at her door needing some discrete help. The Red Guard is an elite protection service but they have recently lost the body they were guarding. Someone managed to get past them and steal the geek scientist they were protecting and his special project. Since it is all hush-hush and rather embarrassing to the Red Guard to have lost their body, Kate is going in with little information, but beggers can’t be choosers and solving the case and getting a recommendation from the Red Guard would help Kate and her new employees, Andrea and Derek, get the business off the ground.

The more Kate learns about this missing scientist and his missing device, the more imperative it is that she find him and more importantly his creation.   He has been creating a device that creates a magic-free void — except anything magical inside the area of the void when the machine goes off is destroyed: including witches, shifters and magic users, like Kate.

THOUGHTS:
I enjoy this series more with each story. I just think Curran needs to hire a battalion of healing mages since Doolittle can’t follow Kate around and keep putting her back together.

After growing up to keep her head down, and her friends and confidants to a minimum, it seems more and more people know who Kate’s father really is. Kate also has a meeting with the witch oracle, Evdokia and learns a lot of distressing information of about her mother and Voron, indicating that Voron was a puppet to Kate’s mother and had no real love for either of them.  Kate knew Voron wasn’t the cuddly sort, but to find out that he really never cared for her hurts tremendously.  After throwing Kate off with all this information, Evdokia also gives her opinion that Curran chose Kate for the connection to her real father, not despite of it. Now Kate fears that she has given her heart wholeheartedly to a man who is once again just using her for her magic. This leaves her shaky and vulnerable, especially since Curran is out of the Keep looking for a rouge shifter and she can’t confront him on it.

Julie is seriously hurt because of Kate and Kate has no other choice than to delve into her father’s blood magic and risk her own life to try and save Julie.

As always, this story is full of action and mysteries to be solved both professional and personal to Kate. It is always an exciting reading experience.

Curran is out of the Keep and Kate needs to handle grievances by herself. Kate is forced to handle a matter where a wolf broke into a pack member’s home to woo her and was shot for it.

He paused. “Well, yes, she does say nice things sometimes to people, but I mean, I’m the only guy there, so it’s different.”

This was so not my thing. I just wanted to hop on the table, knock him upside the head, and be done with it. “But is is possible that you might have misinterpreted Sandra’s comment?”

It took a few more seconds, and then he finally said, “It’s possible.”

Hallelujah. “Suppose there was a man working in your office. A much larger, stronger man. Let’s say a render. He came into the office wearing a new leather jacket. You had a friendly chat, you complimented his jacket and that night you woke up with the man standing over you, nude and holding a bouquet of roses.”

“It’s not about being gay; it’s about being confronted by someone larger and stronger than you are when you are at your most vulnerable. If you were to find this dude standing in your bedroom, would you be upset?”

Oh, screw it. “She is smaller and weaker than you are. She woke up, saw you naked and ready for action, and probably thought you were going to rape her. She was scared, Ken. You scared her half to death.”

“She didn’t have anything to be scared about! I wouldn’t have done anything.”

“She didn’t know that. You already broke into her house, so you have no respect for her property. What would make her think that you would respect her as a person and just walk away if she told you to leave?”

Muscles played along Ken’s jaws. “That’s the way the shapeshifters do it. Everybody knows that you didn’t encourage the Beast Lord, but he broke into your apartment and you didn’t shoot him.”

The audience got so quiet, I could hear myself breathe. So that was it. That was what Jennifer was after.

“I see.” My voice went quiet. “Is that why you decided to appeal directly to me?”

Jennifer wanted to embarrass me. Well, if she expected me to wilt, she’d be waiting until hell sprouted roses. I turned and looked at Jennifer. She smiled back at me. Half a second to clear the desk, two seconds to cross the room and I could be sinking my fist into her face. Cure all her ills and mine.

“I had no idea that Clan Wolf’s alphas kept such a close eye on my relationship with the Beast Lord. I’ll have to check under our bed tonight to make sure no little wolf spies are hiding under there.”

Somebody snorted and choked it off.

“Do you know what I did after I discovered the Beast Lord in my apartment?”

Ken realized he was on shaky ground. “No.”

“I put a knife to his throat,” I said. “And I changed the locks on my door. Beside that, I had encouraged the Beast Lord prior to him breaking in. I flirted with him, I kissed him, and I paraded around in front of him in my underwear.”

I was almost done. I just had to keep from pummeling Jennifer for a little bit longer. “Did Sandra ever do any of those things?”

Let’s get it all out there. “Did she ever make out with you in a hot tub or offer to serve you dinner naked?”

My face must’ve gotten darker, because Ken gulped. “No.”

“Very well. I’m ready to rule.” I looked at Sandra. “You may say something if you would like.”

She shook her head.

I looked at Ken. “You acted like an idiot and got eight bullets for your trouble. Count yourself lucky that she didn’t shoot you where it counted. If it had been me, I would’ve cut off your head and filed a police report after you were done bleeding out on my carpet. Suck it up, learn from it and move on. You get nothing. Apologize to Sandra for scaring her and then causing her a load of embarrassment by having this matter dragged before the Pack assembly.”