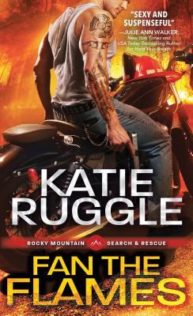 Fan the Flames (Search and Rescue, #2) by Katie Ruggle

[box style=”rounded” border=”full”]I am enjoying Katie Ruggle’s Search and Rescue series and I am looking forward to more.  There are some great characters and a real family feeling to this small town rescuers.  The author does a great job cranking up the threats and tension. I was disappointed that there was some similarity to the ending of both this book and the prior book and I hope that doesn’t become a thing in this series or the stories will become predictable.[/box]

Ian Walsh is trying to straddle two worlds. Worlds that, like oil and water, don’t mix well. During his youth, Ian became involved with the The Riders Motorcycle Club. Some of their activities crossed the lines of legality.  As an adult, Ian has found his true calling as a firefighter and the close brothers he has made there. While Ian is respected at the firehouse, his role with the MC still creates some problems for him.

Especially when Ian’s pendent is found wrapped around the weight holding down the headless dead guy who was dredged out of the lake a few months ago. Most of the guys at the firehouse don’t believe that Ian would have anything to do with that, but would they say the same with his MC buddies?

Ian isn’t the only one having problems with the Club. Ian lost his heart to Rory Sorenson when they were children. Rory has been the owner of the local gun shop since her parents passed away.  She has also had some back room dealings with the motorcycle club but things go from bad to worse when some of the Riders decide they want all of Rory’s inventory and if she gets in the way, Rory is disposable.

Ian won’t let Rory be hurt by anyone but standing behind Rory against his Club brothers puts Ian in the Club’s cross-hairs. Ian is going to keep Rory close no matter what objections she might have. The Riders are out for Rory’s blood and if they have to shoot through Ian to get to her, so be it.

THOUGHTS:
Author Katie Ruggle has created an exciting, tension-filled series. I think Rory was an interesting choice for a heroine. Rory’s parents were doomsday preppers. She lives in a fallout shelter under her gun shop. Her parents ran practice drills for the zombie apocalypse, biological warfare and any other end of the world scenarios. Rory is one of those few twenty-five-year-old virgin heroines that I found believable due to her upbringing.  She was homeschooled and her parents didn’t trust other people and that paranoia only got worse over the years. Unless she is taking about guns, Rory is a bit socially awkward and with the exception of Ian, has no friends. Or at least she feels that she is alone, but as the story progresses, we find that many of the folks in this wilderness town have come to Rory’s shop from time to time for guns or hunting rifles or ammo, especially most of the search and rescue people. Once Ian forces Rory to come with him into Town so he can protect her, she has an opportunity to socialize with the locals outside of the gun shop and finally realizes she is part of the Town and not the weirdo outsider.

How sweet that hot and hunky firefighter, Ian, has been holding a torch for geeky Rory since they were kids. He sees the woman and not the oddball that Rory feels she is, especially standing beside the ultra gorgeous Ian. It is Ian who thought he could never win over Rory who he felt was always a bit standoffish with him but he still ignored all the women who tossed themselves at him.

The romance was sweet and the tension high. With the motorcycle club constantly trying to break into Rory’s shop or punish her for calling the cops, I kept wondering if running a gun shop was worth the daily life/death threat from the more questionable element that desired what she was hiding.

Rory and Ian are on a non-date date when the sheriff stops by their table.

“I’m sure.” Rory still felt awkward. Once again, she resisted the urge to wriggle in her seat. “With the fires and that dead body in the reservoir and..uh, Lou’s stuff and everything.” Her flush heated even more. Stupid nonexistent social skills. Ian’s laugh didn’t help, even if he did try to turn it into a cough halfway through. Under the cover of the table, she pinched his leg. Hard.

He jumped, covering her hand with his so her fingers were flattened against his thigh and unable to repeat the pinch.

“You’re the lady with all the guns?” Tyler asked suddenly, jerking Rory’s attention away from the rock-hard thigh muscle under her palm.

Why did the kid have to bring up my semi-illegal business in front of his sheriff dad? Resisting the urge to send Rob a nervous glance, she kept her gaze on Tyler instead. “Yeah. I mean, I have a gun store.”

“Awesome. Do you have, like, Uzi machine guns and shit?”

“No.” Again, she stopped herself from sending the sheriff a nervous look. “I wouldn’t sell any fully automatic weapons unless they were registered in the U.S. before the 1968 Gun control Act was passed.” As Tyler stared at her blankly, she risked a peek at Rob. He rubbed his hand over his mouth as if hiding a smile, and Rory relaxed slightly…at least until Tyler asked his next question.

“No!” She glared at Ian before turning back to Rob ad his too-nosy son. “This isn’t a date. It’s just us satisfying a biological need.”

Rory wasn’t sure if Ian was choking or laughing. Just to be on the safe side, she patted his hunched back. When she looked up at Rob’s face, his startled expression had her reviewing her last comment in her head.

“Oh!” Her blush before was nothing compared to what was burning her face now. “No! Not that kind of biological…I mean, eating! We were both hungry. That’s it.”

Tyler made a muffled sound, his hand hiding his grin in an unconscious imitation of his father. Squeezing her eyes closed, Rory wondered how she’d stumbled into blurting unintentional sexual innuendo in front of a teenage boy. Her gaffe shouldn’t have surprised her, though. She was clueless when it came to kids. They baffled her. Even when she’d been young herself, they’d seemed like an alien species, complete with their own language. She avoided them when she could. Owning a gun shop helped with that, since her customers were all over eighteen and rarely brought their offspring along.

Rob cleared his throat, and she realized she must have missed a chunk of conversation.

“Sorry. What’d you say?” She asked, tucking a section of hair behind her ear. In a fit of vanity, she’d pulled it out of her usual ponytail and brushed it out before their date–or non-date, or whatever it was. Now it kept tumbling into her face, annoying her. Rory wished she’d brought the ponytail holder along.

“Just that we’ll see you later.”

“Okay. Yes. Good-bye.” This was why she stayed home. Unless guns were the topic, Rory felt like she was wandering around a conversational swamp, complete with quicksand and alligators.

Ian turned to Rob, the humor in his expression slipping away as he lifted his chin in farewell. “Night, Sheriff. Tyler.”

They were quiet until Rob and Tyler had reached their booth. “You can let me go now,” she muttered, tugging fruitlessly at her captive hand.

His hold didn’t ease. “Are you going to assault me again?”

“It was just a pinch. You’re acting like I caught you in a leghold trap or something.”

“Maybe you have.” The corners of his mouth curled up as his eyes heated. “I don’t see myself escaping your clutches anytime soon…or ever.”

Although she hated to admit it, smoldering-gaze Ian Walsh was even more appealing than smiley Ian Walsh.