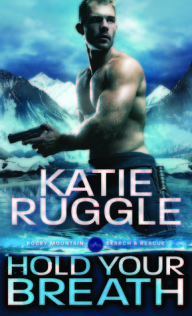 Hold Your Breath (Search and Rescue, #1) by Katie Ruggle

[box style=”rounded” border=”full”]Katie Ruggle’s debut novel is exciting and sweet. It kept me up late into the night reading. I held on to an ARC offer for the next book, Fan the Flames, waiting to see what I thought of this one and I ran to my computer to download it even before I was halfway finished. [/box]

Callum Cook, Captain of the Field County ice rescue dive team, is working on training his newest recruits, which includes way-too-perky newbie to town, Louise Sparks. It was a good day to practice getting in the icy water and recreating a fall through the ice rescue. Especially when the recent warm-ish spell for the Colorado mountains can create dangerous conditions for fools who still try to walk across the no longer frozen lakes.

Lou is having problems keeping herself upright in the water but that’s not uncommon for the newbies their first time in the protective dive suits. Cal explains to her how to get herself straightened out and the rescue starts going well, but in righting herself, Lou kicks loose something stuck to the bottom of the lake. From the moment a headless body floats up from the bottom of the lake, everything in Lou’s life starts to change.

Lou can’t stop thinking about the poor man whose family is probably worried about him. She knows the police are on the investigation but she wants to help out as well, and she kind of drags Cal into it as her Dr. Watson.

Lou might have more to worry about than just HDG (headless dead guy). Someone is slashing her tires and apparently peeping in her windows. Lou has a stalker and he is getting more and more obsessed with her. Does this have anything to do with the HDG or is it simply coincidence?

Cal is going to make it his business to protect Lou whether she likes it or not. He isn’t going to wait around to see just how crazy or dangerous this guy will get.

There has been an attraction between Cal and Lou since she arrived in town a few months ago, but the forced close quarters are heating things up quite nicely and everyone in town is happy to see them together…well, everyone but Lou’s stalker. Lou will never be his until he gets Callum out of the way, for good.

THOUGHTS:
This was a fabulous debut novel from Katie Ruggle. I thought we would get an interesting search and rescue book, but wow, it was so much more. It had more than one intriguing mystery to solve. It had romance. It had great characters as well as an introduction to interesting secondary characters. This story kept me reading late into the night and the only reason I put it down is because I knew that I would not be able to finish but it still kept me up wondering where the author was going to go with the story. First thing the next morning, I grabbed my coffee and my Kindle and was back at it.

We had the wonderful characters Lou and Cal, who were introduced quickly in the free short story, On His Watch. We have the stoic, all business, Callum, Chief of the dive team, and the bubbly, smart-ass Lou who is a female counterpart to Derek from On His Watch. This is definitely a case of opposites attract. I loved seeing the changes in Cal as the story progressed and how the town couldn’t stop gossiping about how much Cal was smiling lately when no one was sure if he his face was actually frozen in that perpetual frown of his. It would be hard to keep that frown on when Lou is the type who actually bounced on her toes whenever she is happy about something.

Since Lou was the one who kicked the body free from the lake, it weighed on her as a personal responsibility to find out who the man was so that his family could stop worrying about him. To keep up the excitement, there was two mysteries to be solved, or was it only one? Hmmm. Someone killed the headless dead guy and someone is stalking Lou. Is this the same person? Does one have anything to do with the other? If not, who is the stalker and who is the killer? Who can we trust?

The usual problem with romance-thrillers is that there is usually so few characters introduced that you can easily guess who is your bad guy and what is going to happen. This story really kept me captivated and needing to keep reading. It is also set up to flow into the next story so I don’t know if you will be able to read these as standalones, but you will definitely want to keep reading.

My only complaint here is where On His Watch had what I considered inappropriate sexy time, in Hold Your Breath, there was not enough. Cal and Lou were sharing beds in their one bedroom homes while Cal was protecting Lou from her stalker. There was attraction and interest on both parts and we took way too long to get to sexy times. There was really no reason to drag it out so long. There was mutual attraction from the get go and the close quarters and the danger should have sped that up more. Hot kisses were few and far between and didn’t go anywhere. She wasn’t an untouched virgin nor was it the case of we really don’t know each other. More sexy times were required here!

Oddly, this was written entirely in first person and I would have like to have some time in Cal’s head. 🙁

On His Watch is a free novella and an optional read. You won’t be missing out if you skip it, but it is a free novella so you might as well start there. I often don’t understand why authors release books for free but after reading this one, it made me want to read the rest of her work so it makes sense to me now!

Ahhh…Lou’s stalker drugs her and tries to burn her alive in her cabin.

Shoving back the panic that wanted to overwhelm her, she clung to her one goal–find the door. Through the door would be cold and snow and relief from the heat that burned her, inside and out. Her shoulder bumped something–a wall. That was good. The door was in a wall. All she had to do was decide to go left or right.

Here eyes were useless, tearing so heavily that everything was a blur, flames and darkness melding together into a nightmare. She groped the wall, trying to feel something–anything–familiar that could giver her a clue about where she was. Her fingers bumped something soft and heavy, sending it swinging.

She dug through the thick sludge of her thoughts, trying to identify what she’d found. When she clutched it harder, it fell onto the ground in front of her, the silky surface brushing her cheek on the way down.

“Ski pants!” she tried to say, but she choked on the words and the smoke and her clumsy tongue. With the realization that she was under the coatrack, she knew exactly where the door was. The smoke was thicker there, clogging her lungs and stinging her eyes so badly that a constant flow of tears blurred her vision. The few feet seemed endless as she crawled toward the exit, escape so close she could almost taste her relief.

Pushing up onto her knees, she grabbed the doorknob and toppled back, pulling it open as she went. cold air rushed inside, soothing her overheated body and making the flames behind her roar with renewed fury. Her arms shook as she pushed herself back to her hands and knees, and a semihysterical part of her mind wondered if she’d be reduced to rolling. That was what she was supposed to do in a fire, right? Stop, drop and roll?

She tried to clamp down and close off the odd thoughts but it was getting harder and harder t hold onto her plan. Out. She was so close. All she needed to do was make it through the doorway, and then she’d be free of the inferno, of the raging heat and too-bright darkness and smoke that made it impossible to breathe or see. One hand in front of the next, a forward slide of one knee and then the other–all she could focus on was moving forward an inch at a time.

Her head bumped something, making her look up. It looked like…legs?

“Oh, thank God!” she rasped, hardly able to force any sound from her stripped and raw throat. “Help! Help me, please!”

There was no answer from the person in front of her, no movement at all. Rocking back onto her knees, she looked up and up at the figure. From her vantage point, the person towered over her like a giant. She swayed, blinking her tearing eyes, and the form seemed to shrink to normal–almost small-size before growing to a terrifying height again. When her blurry gaze reached his face, she sucked in a painful breath that tore at her throat. In the flicker of shadow and light, he looked like a monster.

Then her eyes cleared slightly, and Lou realized it wasn’t a nightmare in front of her, but a person wearing SCBA gear. Fireman! was her relieved thought, although that didn’t seem to fit. Except for the breathing apparatus, he wasn’t wearing any bunker gear. Instead, he was all in black, from his boots to his hat.

“Please,” she tried to say, although it came out as a rasp. Why is he just standing there? she wondered, her voice shrill in her mind. Why isn’t he helping me? She reached toward the figure, wanting to catch a hold of his arm, but he shifted out of reach. Confused and swaying, Lou stared at him.

Then the man lifted a booted foot, placed it in the center of her chest and shoved.

Even as she tumbled back into the burning cabin, Lou couldn’t comprehend what the person had just done. The door slammed closed as she lay sprawled in the entryway, shock holding her motionless. Then it all suddenly clicked into place. Her stalker. Her stalker had likely drugged her, had set her cabin on fire…and now he was going to watch as she burned alive.

One response to “Review: Hold Your Breath by Katie Ruggle”