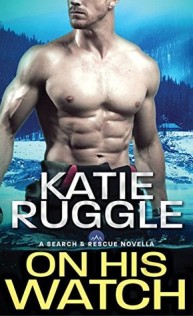 On His Watch (Search and Rescue, #0.5) by Katie Ruggle

[box style=”rounded” border=”full”]This is a case of don’t judge a series by it’s free novella. If I didn’t already have a copy of the first book, I might have stopped right here and missed out. It’s free. Grab a copy, but don’t let this so-so novella stop you from reading more.[/box]

Artemis has brought her class out to watch the search and rescue squad perform an ice rescue. It would probably be more interesting if Artie could concentrate on anything other than Derek Warner giving the demonstration. It has been years since Artie and Derek broke up but tell that Artie’s heart. All these years and she still misses him so much.

But Artie is so busy focusing on Derek and her broken heart, she misses when one of her students is dared to walk onto the ice and falls through. Suddenly the demonstration becomes a life or death rescue of a third grader. Artie isn’t the only one blaming herself for the accident and while everyone watches to see if Derek can get the boy out of the ice before he drowns, the dare-rs decide it is time to take off before the police come for them.

Once the little boy is safely in an ambulance and headed to the hospital, a head count shows that two kids are missing. Now search and rescue turns from the ice to the mountains and two little girls need to be found before the snowstorm hits.

Artie and Derek are paired up as part of the search. This is the first time these two have been together since they were forced apart years ago. In this search Artie and Derek hope to rescue two lost children as well as their lost love.

THOUGHTS:
This is definitely a case of not judging a series by it’s initial novella introduction. It started out well with the rescue of the kid falling through the ice and introductions of Derek and Cal and Lou, who will be the focus of the next book.

But Artie isn’t a well fleshed out character other than a nice teacher. Derek is introduced as the fun-loving, wise-guy of the dive squad, but he isn’t given enough of a story for us to really get to enjoy him. His character is wasted here. We also get a quick reference to what happened in their relationship. Derek was a bit of a juvenile delinquent and was dragging young Artie into trouble. They get arrested as teens and Derek realized he could ruin Artie’s life and her future, since he knew she wanted to be a teacher, so Derek breaks up with her. We don’t get much on how Derek came from being a JD to a member of the dive team.

Here’s some things that bothered me most about the story: A class trip to a frozen lake which still takes place when a big snowstorm is about to hit. It starts just as the school bus leaves and the searchers start to look. Wouldn’t it have been a good idea to postpone an unnecessary class trip on unsafe, slick roads during a storm? Plus, lawsuit, lawsuit, lawsuit — you have one kid falling through the ice, nearly drowning and two kids wondering off into the wilderness since neither one of the teachers nor the two irresponsible parent chaperones are actually paying attention to the children. Artie and Derek get separated from the group when they encounter a large ravine and have to go around, then after the storm starts, they get a broken up transmission which might have said the children were found and instead of heading down to the meeting point, they wander further to a broken down cabin that Derek knew of to warm up. Why would you not head down? Oh, yeah, because the frozen, broken down cabin in a white out snowstorm is the perfect setting for quick sex with your ex. I can’t think of another story off the top of my head with an unnecessary and unreasonable sex scene. I am sure we’ve dealt with that, but I can’t think of one right now. There was no reason to deviate to this cabin and if I am freezing and trying to share body heat, the last thing I want is for you to unzip my pants and drop your ice cold hand down my pants. Just saying. Heading in would have been the smarter option and having a warm up session in a hot shower would have made more sense and would have been a better story than WTF??

I hate wasting good characters on a short story and the whole sex in a broken down cabin during a snowstorm made no sense. They didn’t stumble upon it, they went searching for it. It had only a partial roof and really didn’t do too much for warming up so going there made no sense.

You should read this short story just to get a feeling for the search and rescue and for the quick meet of Derek, Lou, Cal, and Sheriff Rob. Unfortunately, I think if you just read this story without the first novel, you will not come back for more.

Check out my review on the first novel, Hold Your Breath, which is definitely worth picking up.