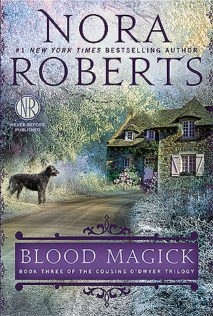 This book is the final book in the trilogy. Although this gives us the big final battle with Cabhan, I was all about the Romeo/juliet love story between Fin and Branna from the beginning and was excited to finally get their story.

This final installment of the Cousins O’Dwyer trilogy features Branna O’Dwyer and Finbar Burke. So far the descendants of the Dark Witch have failed in their attempts to destroy Cabhan. But with each failure, they learn a little more what his weaknesses are. In their last attempt, they crossed dimensions and added the combined power of the original three, Sorcha’s children. They need to find a way to once again cross time and draw the power of the original three to Branna, Connor and Iona’s magic.

But there is more to be done this time and the answer to Cabhan’s power is revealed. A dreamwalk with Branna and Fin take them to the time when Cabhan first received his dark powers and merged his body and power with a demon. It is the power of the demon that has allowed Cabhan to regenerate time and again. This time they will be prepared to destroy not only Cahban, but the demon inside giving him power.

In the past, Cabhan has attempted attacks on the women of the group. He has no respect for women who he considers to be weak. Only a year ago Iona was new to her powers and Meara has no magic so in Books 1 and 2, Cabhan attempts to destroy their circle through them. Since Branna and Fin are the two most powerful witches in the group, he does not attempt to attack Branna through magic, but through seduction. He uses Fin and Branna’s denied love for each other against them. He offers to disguise himself as Fin to get Branna into bed. When seduction doesn’t work, he tries the same approach on Fin. He offers him a gift of the witch he desires to join forces against the circle.

The epic battle should be the big draw to the third book, but to me it was more about Fin and Branna. We watched them battle their feelings through the first two books. Fin was Branna’s first kiss, first lover and first love. As teens, they planned out their future together until the mark of Cabhan came upon Fin and tore them apart. The descendant of the Dark Witch couldn’t be with the blood of Cabhan. As a girl, Branna felt betrayed by Fin, that he kept this knowledge from her, but Fin was as unaware as Branna until the mark appeared.

Fin has been wandering the world searching for a way to remove the mark and to get away from Branna. He couldn’t stay so close to the only one he ever loved and have nothing but her scorn. Even the house Fin built was based upon the plans they discussed, and designs that he thought Branna would like.

At the beginning of Book #1, Branna was still holding onto some of that childhood pain and punishing Fin. She refused to trust in him but after fighting side by side, she knows that although they can never be together, deep down Fin is still the boy she loved and trusted. Because she has set aside her anger, she is now overwhelmed by those feelings of the loss of their connection and the life they can never have.

As they go into their final battle, both hold a secret hope in their hearts, that if they can succeed in destroying Cabhan and his demon, and Fin’s mark is removed, there might just be a chance for a future for them.

THOUGHTS:
I loved Branna and Fin throughout the trilogy and was excited to finally get more of them. In the first two, you really felt Fin’s pain and how much he longed to be with Branna. In this book we finally see how badly Branna pines for Fin as well once she realizes that blaming him for their loss was wrong.

For an epic battle, there really wasn’t too much too it. It was mostly the spells and prep needed and a good portion of the book dedicated to Branna and Fin. Aside from the not very epic battle, it was an enjoyable paranormal trilogy.

“I would have faced him man to man, witch to witch.” Now Fin’s eyes fired, molten green, as rage overcame guilt. “I wanted that.”

“As we all do, but that’s not his way. You may come from him, but you’re not of him. He keeps at you as he can’t conceive you’d make the choice not to be.”

“I left you because I was shocked and hurt and angry. And when that cleared because I’m sworn.” She closed a hand around her pendant. “I’m sworn by Sorcha and all who came after her, down to me, and Connor and Iona, to use all we are to rid the world of him.”

“And all who came from him.”

“No. No.” Outrage would have come first at any other time, but she still felt his guilt under everything else he felt. “You come from him, but you’re one of us. I’ve come to know that was meant. I’ve come to believe none who’ve come before us succeeded because none who came before had you. Had his blood with them. None of them had you, Fin, with your power, your loyalty, your heart.”

He heard the words, believed she meant them. And yet. “I’m one of you, but you won’t be with me.”

“How can I think of that, Fin? How can I think of it when even now I can feel the urgency of what we’re sworn to do building again? I can’t see beyond that, and when I do, when I let myself think about what might be once this is done, I can’t see any of the life we once thought we’d make together. We were so young—“

“Bollocks to that, Branna. What we felt for each other was older than time. We weren’t the young and foolish playing at love.”

“How much easier would it have been if we had been? How much easier now? If we only played at it, Fin, we wouldn’t be bound to think of tomorrows. What future could we have? What life, you and I?”

He stared into the fire, knowing again she spoke the truth.

“None, I know it, and still that feels like more than either of us have without the other. You’re the rest of me, Branna, and I”m tired enough right now to keep pretending you’re not.”

“You think I don’t mourn what might have been?” Hurt radiated through her into the words. “That I don’t wish for it?”

“I have thought that. I’ve survived thinking that.”

“Then you’ve been wrong, and it may be I’m too tired as well to pretend. If it was only my heart, it would be yours.”

She took an unsteady breath as he turned his gaze from the fire to her face.

“It can’t be anyone else’s. It’s already lost. But it isn’t only that, and I can’t act on might be. When my father gave me this?” She held up the pendant. “I had a choice. He told me I had a choice, to take it or not. But if I took it, the choice was done. I would be one of the three, and sworn to try, above all, to end what Sorcha began. I won’t betray you, Fin, but neither will I betray my blood. I can’t think of wants and wishes, I can’t reach for might bes. My purpose was set before I was born.”

“I know that as well.” There were times the knowing it emptied him out. “Your purpose takes your head, your power, your spirit, but you can’t separate your heart from the rest.”

“It’s the only way I can do what needs to be done.”

“It’s a wonder to me you believe all who’ve come before you would want you unhappy.”

“I don’t, of course, I don’t. It’s that I believe all who’ve come before me need me to do what must be done, what each of us have sworn. I…” She hesitated, not at all sure she knew how to say what was in her. “I don’t know, Fin, I don’t, if I know how to do what I must and be with you. But I can swear it’s not wanting to hurt or punish you. It may have been long ago when I was so young and so hurt and frightened. But it’s not that, not at all.”

He sat silent for a time, then looked back at her. “Tell me this. This one thing. Do you love me?”

She could lie. He would know it for lie, but the lie would serve. And a lie was cowardly.

“It’s enough. It’s enough to hear you say what you haven’t said to me in more than a dozen years. Be grateful I owe you a debt.” There was fire behind his eyes, burning hot. “I owe you for what lies sleeping there, else I’d find a way to get you into my bed, and put an end to this torment.”

Review: Lord of the Vampire by Gena Showalter
« Review: Once Upon a Christmas Kiss by Manda Collins
Review: I Saw Her Standing There by Marie Force »