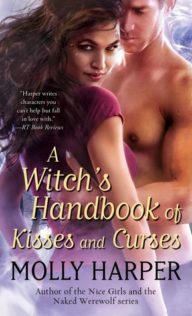 A Witch's Handbook of Kisses and Curses (Half-Moon Hollow, #2) by Molly Harper

Nola Leary would have been content to stay in Kilcairy, Ireland, healing villagers at her family’s clinic with a mix of magic and modern medicine. But a series of ill-timed omens and a deathbed promise to her grandmother have sent her on a quest to Half-Moon Hollow, Kentucky, to secure her family’s magical potency for the next generation. Her supernatural task? To unearth four artifacts hidden by her grandfather before a rival magical family beats her to it.

Complication One: The artifacts are lost somewhere in vampire Jane Jameson’s occult bookshop. Complication Two: Her new neighbor Jed Trudeau keeps turning up half-naked at the strangest times, a distraction Nola doesn’t need. And teaming up with a real-life Adonis is as dangerous as it sounds, especially since Jed’s got the face of an angel and the abs of a washboard. Can Nola complete her mission before falling completely under his spell?

Nola Leary has traveled all the way from the small Village of Kilcairy, Ireland to the small Town of Half Moon Hollow, KY, to find Gilbert Wainwright. On her deathbed, Nola’s grandmother, Nana Fee, confessed that as a young woman she had a passionate affair Gilbert Wainwright while he was searching for weredeer, which culminated in the birth of Nola’s mother. Not only that, but Fiona also gave over the family’s mystical treasures to Mr. Wainwright for safe keeping.

You see, Nola is a witch and centuries ago, Nola’s family used these objects to bind the Kerrigan Family from using their powers for harm. But as all mystical bindings go, the binding must be refreshed every 100 years on the night of the summer solstice. If the Kerrigan Family finds the objects first, they can use these Elements to bind Nola’s family powers for the next 100 years.

Now Nola is standing outside of the now deceased Gilbert Wainwright’s store, Specialty Books, hoping and praying that Mr. Wainwright hasn’t sold off her family’s treasures, where she meets the new proprietor, Jane Jameson-Nightingale, who isn’t ready to trust another previously unknown relative of Mr. Wainwright who shows up at her door.

With the help of Jane, Andrea and Dick Chaney, they will search the black hole known as Mr. Wainwright stock room to try and find the four rather unremarkable objects in time to bind the Kerrigans before they are freed to wreak magical revenge on Nola’s family.

It is always so much fun to return to Half Moon Hollow. To quote Jeb, “It’s a bit like the mafia, only with snarky insults instead of cement shoes.” I love the interaction between all the characters in this series. Molly Harper adds a lot of fun into her writing.

There is a love interest here in the form of contractor, Jed Trudeau who is sharing the two-family house with Nola, and it is fun and flirty, but there is a lot more interaction between Nola and Jane and the gang rather than Jed. So in the end the romance is just a bonus to the main story of finding the magic objects in Jane’s store.

“It’s like the magical Hatfields and McCoys,” Andrea marveled.

“You’re not entirely wrong,” I admitted. “We lost people on both sides, to violence and curses. About three hundred years ago, the two matriarchs of the families met and agreed that matters had gone far enough. They selected four objects representing each of the elements and blessed them with magic from both sides. These objects, which they called the Elements, were scattered to the winds, given to strangers, sold to tinkers, that sort of thing. The matriarchs agreed that the family that found all four objects first would be able to bind the other branch.”

“If I wasn’t under an enormous amount of stress, I would find that funny,” I assured her. “The potential of losing our magic was a considerable risk, a risk I can only imagine was inspired by desperation. It took decades, but we rounded up the Elements first and bound the Kerrigans from doing magical harm. For the most part, they’re no more powerful than the average disenfranchised teenage who has seen The Craft once too often. The most they’re able to pull off is a stirring of air, which, honestly, could be done with a strategically place fan, so it’s not terribly impressive. But every one hundred years, on the night of the summer solstice, the binding has to be repeated by the family’s strongest witch. This leaves a small window of time in which the Kerrigans have a chance to obtain the objects and undo the binding, reversing it onto my family. They tried it once in the early 1900s, and my Nana Fee’s great-grandmother laid down a witchcraft bitch-slapping of epic proportions. I also hear there was a mighty nonmagical slap involved. And now it’s my generation’s turn, and by some bizarre accident of birth, the so-called strongest witch in my family happens to be sitting here in front of you.”

A Cheshire cat’s smile split Jane’s face. Andrea held up her hand and said, “No!”

“You don’t even know what I was going to ask!” Jane huffed.

“Whatever juvenile, ill-conceived test of her abilities you were about to demand could only end in tears.”

I stared at both of them. These were the people Mr. Wainwright had entrusted with his shop? They were the ones who were supposed to help me track down the Elements?

“Sorry, Nola, you were saying?” Andrea asked, pouring me another cup of coffee.

“Under normal circumstances, the binding wouldn’t be a problem,” I said. “It’s just a minor incantation spoken over the artifacts. Around the time Mr. Wainwright visited all those years ago, Nana got rather worried about an increase in Kerrigan-related violence. She saw that he was trustworthy, that he was devoted to the pursuit of knowledge. So she took the objects out of the family vault and entrusted them to his care. She thought they would be safer with him.”

Both women winced, the corners of their mouths drawing back sharply. Jane said, “She probably should have rethought that. I don’t want to alarm you, but when I first got here, the shop looked like an episode of Extreme Hoarders: Book Edition.”