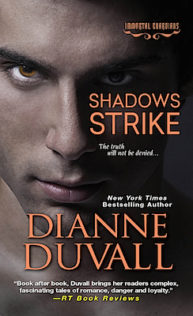 [box style=”rounded” border=”full”]I love this series and it just keeps getting better and better with each book. The Other is no longer plotting against just the Immortal Guardians. Now they are looking to start the apocalypse. Priorities have changed.  It’s no longer just about keeping the vampires and the Immortals a secret. Can the Guardians stop the plot to end the world before it’s too late? [/box]

In Shadow Strike, I am torn between what I liked better, the romance between Ethan and Heather or the growing tension as the Other is attempting to start World War 3.

Heather has been waiting in the field next to her house every day at 5:43 a.m. for the past year. She has done this every morning since she began dreaming the same dream that at 5:43 vampires and the most gorgeous man she has ever seen come bursting into that field fighting. Heather can hear other people’s thoughts, but she has never been precognitive. Yet something compels her to wait each morning to see if her dream becomes a reality. Imagine her surprise when one morning they actually burst through into the clearing. It’s a good thing she brought her 9mm with her.

Ethan doesn’t know what Heather is doing there in that field, but if he wasn’t for her he might have had more problems taking on seven vampires without injury. At only 100 years old, Ethan hasn’t yet built the strength and speed needed to take on so many vampires by himself.

Even though their introduction was unconventional, there is no question about the instant attraction both feel. Sadly, there might not be enough time left in the world for them to get to know each other better.

The Other who is working against Seth and his Immortal Guardians is ready to take things to the next level. He is no longer satisfied with just trying to torture and torment Seth. He wants to destroy the world. He is building an army of vampires in hopes of sparking World War 3.

The head of the Guardian’s Network, Chris Reordan, wants to sway Heather’s father, an army General, onto their side. Heather wants to help but is concerned that if her father won’t agree then erasing his memory of the Guardians could cause him irreparable brain damage. Ethan is torn between his loyalty to the Immortals and to protecting the humans, and forcing the woman he is falling in love with to chose the fate of the world over the life of her father.

Time is ticking and if they can’t find the Other soon, they may no longer be able to leave the choice to Heather. The entire world is a risk from an unstoppable vampire army. If the Other succeeds in unleashing the vampires against the United States Army under the guise of a terrorist attack, it may be too to stop Armageddon.

THOUGHTS
This book is full of tension and suspense I couldn’t put it down.  It was to the point that I was thinking “This is no time for sexy naked time! Do you realize what just happened?” Really, who wants to hurry along the hot sex scenes to get back to the storyline?  That’s crazy talk! But I just had to know what they were going to do next.

With just a few changes, the whole story could have become very dark and depressing. I would have hated to see that happen because I like this series and these characters so much.  I was concerned during several scenes that things were going to go really bad, but thank God it’s paranormal romance where everyone has sex and a HEA and not an Urban Fantasy where main characters get tortured and chewed on.

I loved Ethan when we first met him in Night Unbound.  I thought that Ethan’s special and very boring ability would become crucial in this story, but it seems it is actually so boring and useless and she couldn’t even write in a scene where it would be helpful.

I am not certain whether Aiden will be hero of the next story. I am torn between wanting to give the guy his HEA and telling him to stop his f*cking whining. “Everyone has found love but me.” “I’ve been so alone for so long.” He really does sound desperate and pathetic and he is actually getting quite stalkerish since there was a scene where he helped a woman change her tire which he had flattened in an attempt to meet her.  Stalker!   And what is he going to do if they hit it off.  Someday she’ll be telling him how lucky she was that he came along to help and he is going to have to confess to his stalker attack on her car.  I am not sure if I am sorry for him or completely annoyed by him.

I can’t recommend this series enough. I just love this group of characters and the stories just get more interesting. Bastian is still my guy although Zach comes in a close second. I guess I just like the black sheeps.

Gravel crunched in the driveway.

Leaning forward, Heather lowered her feet to the floor, sat up straighter, and curled her fingers around the grip of the 9mm on the coffee table.

Again she consulted the clock.

Damn it. Please be wrong, she silently implored.

Ethan stared at the front of Heather’s comfy little home. Thought warm light shone behind the curtains, he heard no movement inside, no television droning, no flip of a page that would indicate Heather read a book or a magazine.

Was she sleep? Curled up in bed with the covers tucked beneath her chin, her slender body encased in a barely there nightgown?

He checked his watch.

10:49 p.m. Early for him. But mortals tended to keep different hours. He didn’t know now often or how early Heather got called in to advise or observe interrogations.

Was this too late to call?

He wiped his hands on his pants. I can’t believe my palms are sweating. What the hell am I doing?

Calling himself six kinds of a fool, he collected the items he’d set on the roof of the car and strode up the wooden stairs. Bending, he set the goods on one side, out of her line of sight. Then, taking a deep bracing breath, he knocked on the door.

Good. He hadn’t woken her.

The light behind the peephole darkened. The rattling of bolts being turned and a chain being removed preceded the opening of the front door.

Heather peered up at him. “Ethan. Hi.”

“Hi.” He smiled. She was as beautiful as he remember. It had been hell, trying to stay away. He had only made it two weeks before he had given in and come to see her. He knew he shouldn’t lure Heather into his world, especially with Chris Reordon waiting in the wings to recruit her, but…he had been unable to stop thinking about her.

“What are you doing here?” she asked and looked past him.

Not the friendly, flirty response he had hoped for.

His gaze drifted beyond her. Did she have a guest? A male guest?

He hackles rose. “Are you alone?”

But she neither opened the door wider nor welcomed him inside. Had he read things wrong with her?

“I was just hunting nearby,” he began.

Alarm swept across her features. “Hunting vampires? You saw more vampires hanging around?”

She didn’t relax. Nor did she stop visually searching the yard behind him.

“I meant I was hunting in the area and …was passing by on my way home and just thought I’d…” He rubbed the back of his neck and sighed. “Ah, hell. I suck at this.”

“I wasn’t hunting nearby,” he admitted. “I was hunting forty miles away. But I can’t stop think about you and wanted to see you again.” Bending, he retrieved what he hoped she would see as a romantic gesture. When he straightened, he held a newspaper in one hand and a stainless steel coffeepot in the other. He offered her a sheepish smile. “It seemed like a good idea at the time.”

Heather bit her lip. And he did think he saw a little Aww, how sweet enter her pretty brown eyes.

Stepping closer, he leaned against the door frame opposite her. “I’m afraid I don’t really know how to do this.”

He heard her heartbeat pick up. “Do what?”

“Date. I haven’t tried to court a woman in about a century. I don’t know how to get things going and can’t ask Ed or he’ll never let me live it down.” Damned if he didn’t feel like a teenager with his first crush.

Her throat moved in a swallow. “You want to date me?”

“If dating you means sending lots of time with you, getting to know you, and exploring every inch of your delectable body as soon as you’re ready to take things further, then yes. I really want to date you.” He held up his goodies. “I remembered your neighbor with a newspaper analogy and…” He released a rueful chuckle. “As I said, I don’t know what I’m doing. I don’t even like coffee. I just liked the idea of it and wanted to see you again.”

“But I really wish you hadn’t come.” Stepping back, Heather opened the door.

Disappointment struck. “Why?” He had been so sure she’d felt the same spark.

She brought the hand he hadn’t realized she had be hiding behind her back around and raised a Walther PPQ 9mm “Because I dreamed you would.”

As Ethan gaped down at her, she pulled the trigger.