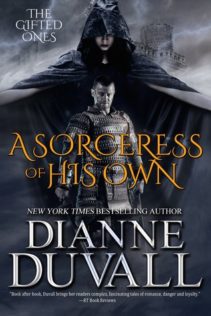 [box style=”rounded” border=”full”]This series is a prequel to Dianne’s popular Immortal Guardian series.   This is the introduction of the gifted ones.  They have advanced DNA and special abilities such as reading thoughts, healing with their hands or seeing the future.  It is their descendants who will someday become the Immortal Guardians.  It is much different from her current series, but just as enjoyable. [/box]

Alyssa was only sixteen when she dons the cloak that her grandmother wore for so many years as the advisor to Lord Dillon’s father. Now Dillon is assuming his father’s title and it is Alyssa who will serve as his healer and advisor. Her grandmother has told her many tales of the noble deeds that young Dillon has performed and Alyssa’s admiration for the young lord have convinced her that she needs to take her grandmother’s place.

Alyssa has promised that she will never remove her cloak. Giving the old wise woman and almost deathless presence and allowing the people to believe her powers have only grown over the years so none would dare cross the young girl hiding behind the mask of age and power.

Lord Dillon is a feared warrior and has used his fighting skill in many battles. He has earned the loyalty of his men and many gifts of land and wealth from his king. The one thing that battle has not granted him is a woman of his own by his side. A woman who will not fear him like so many of the noble women do and someone who will guide him and love him and who is willful enough fight with him when the occasion warrants. The only woman who fits that description is the old seer who has stood by his side these many years.

It is the moment that his king grants him the lands which belonged to the son of Dillon’s friend, who has insulted the king, that will cause the greatest change in Dillon’s life. When Dillon goes to seize the castle, he and his men are attacked on the road and Dillon receives a mortal wound. He is brought back home and Alyssa is brought in to try to heal the wounds. No one knows that in order to heal, Alyssa takes the wounds into her own body. If she wants to save Dillon, Alyssa will need to trade her own life for his but this is a sacrifice Alyssa has been willing to make since she arrived at Dillon’s door seven years ago.

After Alyssa collapses, Dillon learns that she is the young woman who has haunted his dreams and he will do whatever he must to make Alyssa is bride, even if he has to fight his king and Alyssa herself.

This story has a bit of a Game of Thrones feel to it that when things were going bad for Dillon and Alyssa, I truly started to be concerned about what awful things would happen to them. I was waiting for the backstabbing and the betrayals. Thankfully, this is part historical/part paranormal and all romance which means the raping and mutilations are kept to a minimum. *Whew*

You can’t help but admire Alyssa. She is a strong female character and very pragmatic. While Dillon has flights of fancy about how they will be together forever, it is Alyssa who points out the reality of their situation, like: She is not of noble blood. The king will never allow them to marry. Everyone thinks she’s an old lady. The people fear her powers as much as they fear Dillon.

I appreciate that even before Dillon learns Alyssa is a beautiful young woman, he finds out that she is feared and rejected by his people.  Dillon makes an effort to point out that Alyssa has healed almost everyone in the town at some point in time and shames them into realizing she deserves better treatment.  Dillon’s brother, Robert, takes up the cause as well and does a better and much more subtle shaming of the people that by the end of the story, Alyssa finally has the respect she earned for the last seven years.

This is a much different story than Dianne’s Immortal Guardians, but her writing style is enjoyable, the characters are loveable and judged separate from her other series, it was a wonderful story and a great beginning to a new and different series.

“Leave us,” he instructed, never taking his gaze from Alyssa.

He knew not what Ann Marie saw in his face, but it sent her fleeing across the room to retrieve a bundle from the bed, then out the door without donning Alyssa’s dark robe.

Dillon stood beside the tub for many long moments, simply drinking in the sight of her.

Alyssa’s hair had begun to dry and spilled on to the floor in rivulets of midnight satin that would soon draw up into waves and curls. The hollows that had formed under her eyes lay hidden beneath the thick lashes that brushed them. The full lips he had neglected to kiss while his hands had made their sojourn over the body the previous night parted just enough for him to glimpse the edges of her teeth. Soft lips. Pink and pouty. His mouth went dry as he pondered how they would taste, how easily they would mold to his own.

The slender arms she had wrapped around him last night now balanced on the rim of the tub. The graceful hands that had stroked his back dangled limply over the side. Her tempting breasts drew his gaze next, their hard pink tips hovering just above the water’s edge. The waist beneath was so small he was sure he could span it with his hands. Full hips bracketed the thatch of dark curls he had pressed his arousal against in his moment of weakness, then yielded to shapely legs he thought surprisingly long considering her diminutive height. Legs he wanted her to wrap around him in passion.

Leaning down, he drew fingers that shook across her shining temple and back to circle her ear. His palm cradled her cheek as her eyelids fluttered, then lifted.

“Dillon,” She murmured, a sleepy welcome that touched him deeply. Smiling, she raised one hand to stroke his cheek. He heard the rasp of his beard stubble as she stroke him again, further heating his blood.

Her smile faltered. A tiny crease formed between her eyebrows as she tilted her head the other way. Again she stroked him. Her eyes widened. “Dillon!”

Jerking her hand back, she bolted upright, splashing water over the edge of the tub and saturating his feet, his legs, and the floor around him. He just managed to keep their heads from colliding.

As Alyssa glanced down at herself then around the room in unmistakable dismay, Dillon realized he made another colossal blunder. The woman had spent seven years completely hidden beneath black robes. Naturally she would not be pleased to wake up and find a gawking male salivating over the naked body.

What should he do? How could he repair the situation?

Dillon started to straighten, already searching in vain both for a suitable apology and for a towel or robe to hand her.

Alyssa made a sound of protest, grabbing his tunic with both fists, and yanked him to her. Caught off guard, he felt his balance waver and grabbed for the tub’s rim.

His arms plunged into water. One foot went up. The other skidded in the puddle she had just produced. And the next thing he knew he was in the tub under water with his face smashed between her breasts.

A great deal of squirming and splashing took place next on both their parts. In the end, Dillon wound up on a position that made his head spin. His hands were braced on the bottom of the tub behind and to either side of her. His lower body was settled oh-so-wonderfully between her thighs, balanced on his knees with his feet in the air and his shins wedged against the foot of the tub.

Heat surged to his groin, which was flush against her center. What lust he had felt before trebled as he met her astonished gaze.

“Dillon, how large a contingent did you–?” The words ended in a gasp.

Alyssa shrieked and threw her arms around Dillon’s neck to keep him from rearing back and exposing her. He bit back a groan when her legs encircled him as well to lock him into position as her shield.

Gritting his teeth, he glared over his shoulder at his brother, impaling him with visual daggers.

Robert stared at them with wide eyes and gaping mouth.

Face reddening, Robert snapped out of his shock and straightened. “I, uh…uh…” Blinking, he looked around the room with exaggerated surprise and blurted, “Why, this is not my chamber!” Spinning around, he exited and slammed the door behind him.

Nonplussed, Dillon looked down at Alyssa.

Now that their unwelcome audience had left them, she relaxed her hold and leaned back so she could meet his gaze.

Both burst into merry laughter.

4 responses to “Review: A Sorceress of His Own by Dianne Duvall”