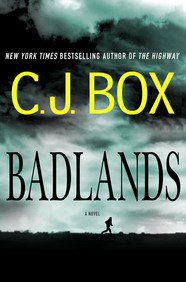 [box style=”rounded” border=”full”]If you liked Fargo, either the movie or the TV series, you will like the writing of C.J. Box. This was my first novel from this author and at the very least, I want to read the prior novel, The Highway. Be warned, just like Fargo, it doesn’t hold back on the violence.[/box]

Kyle Westergaard is a twelve-year-old in the once sleepy Town of Grimstad, North Dakotah. He is treated differently than the other kids. He is the victim of fetal alcohol syndrome and everyone treats him like he is slow. He might not speak very clearly, but he is hard worker and he taken up a paper route to help support his mom. Winter is coming and it is getting harder to ride his bike each morning, especially since there are so few houses out along the route he was assigned. His fingers and feet keep freezing and the snow already on the ground makes it harder to get around. That is probably why he was still out near the highway when he saw two cars racing down the road. One of the cars crashed and as it flipped something large came flying out near his feet. The police were already on their way so he grabbed the bundle and put it in his delivery sack to look at later. Kyle never expected to find it filled with stacks of cash and little packets of powder.

Meanwhile, Det. Cassie Dewell will be starting her new job as Chief Investigator for the Grimstad Sheriff’s Department. Fracking oil out of the ground is changing the little town of Grimstad and not all the changes are so wonderful. Several local farmers have become instant millionaires selling their properties off to the big oil companies. Previously unemployed locals can now get $18 an hour to work at McDonalds. The town can’t keep up with the boom and housing is become more expensive than downtown Manhattan. Scores of men from all of the country are getting off the train everyday looking for employment. This financial blessing and new lifeblood to the area also comes a dark side, increased crime, prostitution and drugs.

Cassie is offered the investigator position not only to help keep the crime under control, Sheriff Kirkbride is concerned that not all of his new deputies have the town’s best interest at heart.

Before Cassie Dewell takes her new job, she will hopefully be able to close the case of the serial killer known as The Lizard King. The Sheriff’s office down in North Carolina as well as the DA and the FBI want her to look at a man they have in custody. They are certain this is their killer but they don’t have enough just cause to keep him locked up and are hoping that Cassie’s appearance might shock him into making a mistake.

THOUGHTS:
I liked the quirky storytelling of Fargo, both the movie and the TV series. This story is graphically violent so you need to keep that in mind before you grab a copy. The tension in this story doesn’t come with trying to figure out who the bad guy is. The characters are so well written you know who is good and who is bad as soon as they are introduced.

The tension is brought into the story because we can pinpoint exactly where each character makes that one decision which is going to ruin their lives.   It’s like a car accident.  You are stuck watching the accident about to happen in front of you.  You know it’s going to happen.  You can’t stop it.  But you are fascinated to see just how bloody it’s going to get.

Kyle brings the bag of cash and drugs to his mother’s boyfriend who is an unemployed freeloader, even thought jobs are opening everywhere in town and the oil companies are paying big money for workers. You know the moment he starts with “Don’t tell your mom” and “we’re gonna sell these drugs ourselves” that it is not going to end well because, unlike this loser, we know that drug dealers aren’t going to walk away from over a million in drugs and cash which goes missing.

Motorcycle gangs and the MS-13 are already fighting to dominate the drug market in Grimstad and they will stop at nothing (and I mean nothing) to get those drugs back.

The story isn’t action packed but it is quite compelling and you will keep reading even knowing that trouble is just around the corner.

Since I received a physical book for review, I have a list of people who I know will enjoy this story.

I want to pick up The Highway which is the story of the serial killer, The Lizard King. If it is as graphic as this one, I might not be able to sleep again.

Cassie sat back across from him. He beheld her with a weary expression and said, “Are we done here?”

“Close but not yet.”

Then she made her play.

“I checked on you, Ronald. I interviewed your old teachers, your neighbors, and the employees at your old trucking company. I think I might know you better than anyone else left alive.

“Let’s talk about your new truck. Yellow–that’s kind of bright and cheery, isn’t it? Kind of, you know, metrosexual or something? Have you come out of the closet, Ronald? Now that you have a bright yellow truck, what are you? The Lizard Queen?”

She paused and smiled at him. “You aren’t exactly the sharpest knife in the drawer, are you, Ronald?”

His breathing pattern was becoming more rapid. The long wheeze had morphed into a series of quick whistles, but he didn’t seem to be able to hear himself. Although his expression was frozen in place, his ears had reddened. And she could see a tiny pearl necklace of perspiration on his scalp beneath his dark hair.

“It couldn’t have been easy growing up in that house with no father. And your mother, before she got obese and obsessive, couldn’t really see any value in you. Especially not compared to our sister Jo-Beth, God rest her soul.”

Cassie held out her right hand, palm up and gestured to it. “Here we have JoBeth: Two-sport all-state athlete, honor roll, Future Farms of America award winner. She’s athletic, attractive, and smart. She was even the homecoming queen. Then she joined the U.S. Marines and went overseas to Kuwait. She was a hero. And just like my husband, she was killed in action. Your mother kept the folded flag they sent her on the wall, right next to JoBeth’s trophies. She was proud of JoBeth, and who wouldn’t be?”

She paused and nodded to her right hand and said, “Winner.” Then to her left. “Loser.”

Cassie lowered her hand to the tabletop and shook her head as if she was disappointed in him.

“All those women you tortured and killed, Ronald, just to get back at your mother and sister. It’s pathetic when you thing about it–“

He exploded across the table and screamed, “You fat fucking bitch!” before she had time to react. His huge manacled hands were on her throat, his thumbs crushing her windpipe. She tried to pry them off but he was twice as strong and she couldn’t break his grip.

Cassie rose in an attempt to twist away, and she impulsively kicked at him but her toe bounded off the table leg. The pressure on her throat was unbelievable and the sight of his grimacing face darkened and faded out of her sight like a curtain being drawn across a window.