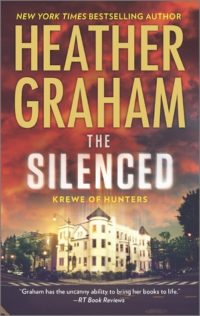 The Silenced (Krewe of Hunters, #15) by Heather Graham

[box style=”rounded” border=”full”]I was assigned this book for review and needed to read the complete story to give a review for another website otherwise I would have tossed it out the nearest window. Finishing this book was painful and I was so happy when it was finally over.[/box]

I was given this book as a review assignment and I was very excited. I had noticed Heather Graham books popping up under my recommendations but never had a chance to look into them. I was under the impression she wrote mysteries but I wasn’t aware that it had a paranormal twist. This was book #15 in a series called the Krewe of Hunters. I thought I had a new series to play catch up on and couldn’t wait.   This book was absolutely awful in all categories it covered: investigation, paranormal and romance.

As a unit, the Krewe is a offshoot of the FBI where all the agents are sensitives. They all seem to have the same ability and that is to see ghosts. I would have thought if we could go so far as to see ghosts, that the author could have branched out into a few other psychic abilities: touching objects, moving things, etc. As far as the ghost interactions, in this book there wasn’t enough to keep it interesting or even make it really worthwhile as a plot point. This story would have been fine without the ghosts as they didn’t bring any more information than good old fashion investigation had to finding the killer.

The investigation itself was pretty boring. The team for this story was new FBI graduate Meg Murphy and she was paired with veteran, Matt Bosworth. Every time they seemed to go in the right direction, they veered off for no reason other than that it took longer to get to the point. They come upon a dog of one of the murdered women and Meg decides to keep him and take him along on the investigation.  (Very professional.)  The dog seems to have his own ESP and seemed to keep pointing out when the killer is getting too close to Meg while she is home or sleeping, but never seems to be pointing the guy out when they are in the same room.  Also, they comment several times on the dog’s perception, but when they are searching a promising location and they go to leave, and the dog is staring at the wall not wanting to move, they pick him up and leave instead of spending just a few more minutes checking it out to see if they dog is sensing anything.  Really?  The ending was quite convoluted and again I would give it a Really?  I am uncertain that the time line really worked to my satisfaction.

On the romance front, Meg and Matt barely notice that they are working with someone of the opposite sex.  Then they go to dinner and it’s “No, I don’t think your a bad agent.” “Where are we going?” “My place to have sex.” “Okay.” There was certainly no sparks or attraction between these two. There was no concern about falling into bed with your superior officer and the newby looking bad. Then it’s all “We’re in love and we’re keeping the dog and moving in together.” WTF?  The author should have left the sex to the end and built up a relationship a bit after the “No, you’re not a bad agent” part.  It wasn’t even an attempt to just toss in hot sex scenes.  It was get naked, vague touching references, pan to the fireplace aaannnd we’re done.

The only star I give goes to two items: One that this group was so in tuned to their abilities, when Meg calls the head of the Krewe to say her BFF has disappeared only a few hours about but she saw her calling for her in the fog of her shower, there was no, “please come in and turn in your gun and badge, Loney Toon.” They jumped right into the investigation.

Also, with the seeing ghost abilities presented, the author threw in trips to several haunted Civil War historical sites and talked about Matt having discussions as a child with a relative of a famous figure. She tried to bring in some interesting history into the story, so bonus points for that.  There was more discussion between Matt and Meg about Civil War history than how hot they were for each other.  Pretty awesome (and convenient) that your new partner also happens to be a Civil War buff like you are.  But truly there was nothing presented that really helped move the story along, so it was just more for filler then finding out the ghost of General Robert E. Lee helped catch today’s serial killer.

Thankfully I got to check out this story and saved hours and hours and lots of money trying to catch up on this series.

Review: Between a Vamp and a Hard Place by Jessica Sims
« Review: The Friend Zone by Kristen Callihan
Review: Flight from Death by Yasmine Galenorn »

One response to “Review: The Silenced by Heather Graham”