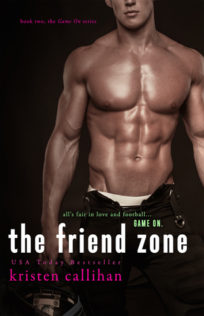 The Friend Zone (Game On #2) by Kristen Callihan 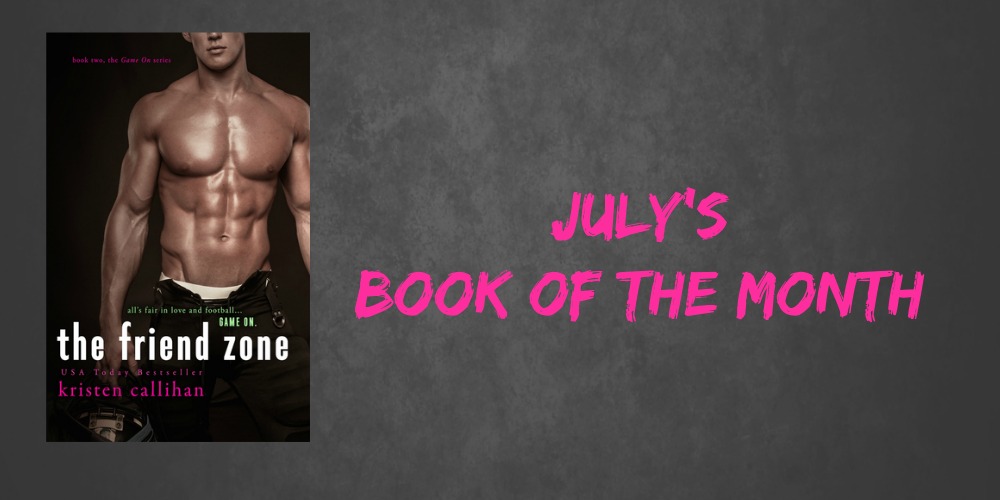 [box style=”rounded” border=”full”]I absolutely loved this story. The characters were fabulous and the story flowed so well. You could feel the click of their connection from the first text messages and the tight friendship which grows between them.  This will be going right next to The Hook Up on my Go-To Book list. [/box]

Kristen Callihan’s 1st book in the series, The Hook Up, came out last year and it has become one of my Go-To books. By that I mean, it’s one of that books that I pick up if I need something to read when I’m between books or I’m too busy to concentrate on starting a new story. I have read The Hook Up several times both from start to finish and just jumping around.

Admittedly, it took me more than one read to come to like Gray Grayson. At first I saw him as a man-whore who was judging Anna poorly for doing exactly what he was doing. Anna wanted to keep things casual and just sexual with Drew and Gray was acting like she was a heartless bitch. Yet Gray only spent enough time with women to get them naked and once the sex was done, he forgot they even had names. After the second or third read, I started to see that Gray didn’t hate Anna so much as he hated to see that his friend was suffering because of her. Gray still didn’t understand why Drew wanted Anna so badly instead of simply finding another women who wanted him.

At least that is until Ivy MacKensie came into Grey’s life, and that is what made The Friend Zone so fabulous. Not only do we have this instant and incredible connection between Ivy and Grey which starts off with simply texting while she is in England and he is here at college, but once they finally meet, we get to sit back and watch their relationship develop from such a strong foundation of friendship.   Grey, who never spent time with a woman that didn’t involve a bed and being naked, finds himself desperate to spend time with Ivy just sitting around doing mundane things like watching T.V.   Grey isn’t caught by Ivy so much as happily throws himself into her arms.

At the end of The Hook Up, Grey needed a car and ended up borrowing one from his new agent whose daughter was out of the country. Grey was forced to drive this tiny, pink monstrosity while Drew borrowed his truck. The texting started when Ivy found out Grey was driving her car. Their friendship blossomed quickly and their texting became a mutual highlight of their days.  The whole Prologue is just their texting back and forth and making that initial connection.

It is their tight friendship which caused the emotional trouble throughout the story. Once Ivy returned to the U.S., she and Grey were spending all their free time together enjoying each other’s company. All the while, there is this simmering sexual tension between them. They both feel it, but their time together means so much to both of them that neither wants to risk losing it all.

Ivy is aware of Grey’s past playboy lifestyle with women, both from her father’s warnings and basically anytime she it out and about in public with Grey and women are literally sitting in his lap and offering him sexual favors. Ivy has only had one-long term romantic relationship and has never done the one-night-stand. She doesn’t want to be a friend with benefit for Grey. Actually Grey doesn’t want that either. He wants a girlfriend for the first time in his life but he can feel Ivy pulling away anytime things start moving toward anything more than just buddies hanging out. Grey (former man-whore) would rather have Ivy in his life as his friend than lose her if she doesn’t want more from him.

Where normally I would feel frustrated that no one is saying anything while they are dying to progress the relationship, here you can also feel their desperation not to ruin the friendship which has come to mean so much to both of them.

This was such an enjoyable story and definitely one I will be reading again and again. I didn’t get a review copy of this one but I picked up a copy on the release day and had it hovering in the background until I finally had a chance to squeeze it in between deadlines. It has thrown off my schedule but it was sooo worth it.

If you haven’t started this series, grab both today. You can thank me later. 🙂

Unknown: Mr. Grayson, my father tells me he lent you my car. I don’t really care if he’s going to sign you or not. As said agent’s daughter, I now football players and their ways. So let me be clear. There will be no shenanigans taking place in it or you’ll answer to me. You want to hook up with one of your women, do it in a bed and not in my car.
Sincerely, Ivy Mackenzie.

GrayG: Hey, Miss Mac. You do realize your car is a bubblegum-pink Fiat 500, right? Even if I could get it up surrounded by all that heinous pink, the car is better suited for Lilliputians. So don’t worry, there will be no shenanigans (Shenanigans? Srsly? What are we, 80?) anywhere near the car. I’m not about to pull a hamstring in pursuit of pleasure. – Btw, beds are overrated. Branch out a little.

IvyMac: You’re schooling me on my use of shenanigans? Really, Mr. Lilliputian? I don’t know whether to choke on the hypocrisy or be impressed that you know what a Lilliputian is.  I won’t make mention of your pink phobia, and I don’t care where you do your business. Just so long as it isn’t in my car.

GreyG: Yes, I read. Contain your shock. Or maybe chill. I think you’re developing a fascination with my bzness.

IvyMac: Ok. Fine. I was an ass. Of course you read. Read this: one scratch on that car and you bought it.

GrayG: It’s a tempting offer. I mean, who wouldn’t want this car? I’m assuming you take gumdrops as currency?

IvyMac: Sure do, Cupcake. But the car’s not for sale.

GrayG: I see you’ve discovered my inherently sweet and tasty nature. Wait until you taste my frosting.

GrayG: Heh. So why are we having this conversation at 4 in the morning? Don’t you sleep?

IvyMac: Sorry. I’m in London. It isn’t four in the morning here. Hey, shouldn’t you be sleeping? Why are you answering my texts anyway? 😉

GrayG: I don’t know. Some previously unknown masochistic need to argue over a powder-puff car?

GrayG: Naw, we bring on the pain, Mac. And have awesome asses. Obviously.

GrayG: Or not. Because you’re in London.

GrayG: K. Night. Or morning. Or whatever.

GrayG: Mac? How do you feel about 18″ chrome rims? Pretty sure when you see the result, you’ll love them.

IvyMac: What? You’re shitting me, right?!?

GrayG: Foul language, Miss Mac? I am appalled. Keep that up and I’m going to have to call shenanigans.

IvyMac: Gray! What the fuck did you do to my car?!?

IvyMac: I admit nothing!! Are you waking me up to terrorize me as payback for waking you up the other morning?

GrayG: Pastries and shit? Oh, God, I’m having a moment.

GrayG: Are you talking dirty to me, Mac?

IvyMac: *eye roll* Is there a reason for this text?

GrayG: Guess not. Sorry to bug you. Night, Mac.

IvyMac: You aren’t bugging me. I’m just grumpy because I hate getting up early. People say I’m…prickly. I don’t mean to be.

GrayG: Prickly? Naw. You’re…saucy. Like that sauce on a Big Mac.

IvyMac: If you call me special sauce, you lose a nut.

GrayG: I knew it, you’re talking dirty to me! Shenanigans!!

GrayG: That’s Cupcake to you, Special Sauce. Go to sleep, Mac. I’ll get to work on the rims.

IvyMac: Why are you borrowing my car, anyway? I find it hard to believe you don’t have your own. Is it in the shop? For-like-ever?

GrayG: My best bud Drew (he’s our QB) broke his leg. His car has a stick shift. My truck is auto. So I lent him mine and borrowed…The Pink Nightmare.

GrayG: Told you I was sweet.

IvyMac: You actually are. Totally sweet.

Several text exchanges after that…

IvyMac: Soup has got to be the best thing ever. It’s an entire meal in a bowl! But in hot liquid form.

GrayG: Hot liquid form…? Unh. I’m pretty sure you’re my dream girl, Ivy Mac. Or did someone tell you that soup was my favorite meal?

GrayG: Booyah! And, baby, I make the best soup you’ll ever taste.

IvyMac: Oooh, talk to me, Grayson. Just. Like. That.

IvyMac: Okay, but only for the soup.