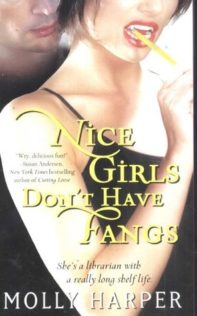 Maybe it was the Shenanigans gift certificate that put her over the edge. When children’s librarian and self-professed nice girl Jane Jameson is fired by her beastly boss and handed twenty-five dollars in potato skins instead of a severance check, she goes on a bender that’s sure to become Half Moon Hollow legend. On her way home, she’s mistaken for a deer, shot, and left for dead. And thanks to the mysterious stranger she met while chugging neon-colored cocktails, she wakes up with a decidedly unladylike thirst for blood.
Jane is now the latest recipient of a gift basket from the Newly Undead Welcoming Committee, and her life-after-lifestyle is taking some getting used to. Her recently deceased favorite aunt is now her ghostly roommate. She has to fake breathing and endure daytime hours to avoid coming out of the coffin to her family. She’s forced to forgo her favorite down-home Southern cooking for bags of O negative. Her relationship with her sexy, mercurial vampire sire keeps running hot and cold. And if all that wasn’t enough, it looks like someone in Half Moon Hollow is trying to frame her for a series of vampire murders. What’s a nice undead girl to do?

Librarian Jane Jameson is having a really bad day. She was just fired from her job from the Half-Moon Hollow’s Public Library, to be replaced by her boss’s alphabetically challenged daughter, and instead of a severance check, she got a $25.00 gift certificate to Shenanigan’s. The day was starting to look better after a plate of potato skins and a pitcher of mudslides, she meets a dark and gorgeous stranger who found her delightful and charming instead of the usual “odd and quirky.”

Well, her day was looking up, that is until she was heading home and her car broke down on the side of the road, and if that’s not bad enough, Bud McElray drives past and mistakes her for a eight-point buck and shoots her in the chest, leaving her to bleed to death in a ditch on the side of the road. Aww, crap!

At least that was the last thing she remembers before she woke up in the said dark, gorgeous stranger’s bed. Oh, no, did she actually just become an unemployed, drunken, one-night-stand floosy? No, wait–she died…

That’s how Jane figured out Mr. Tall, Dark and Yummy was a vampire, and now she was one too. Gabriel Nightengale, vampire sire, was following Jane home to make sure she arrived safely after her Shenanigan’s bender and saw her get shot and left in the ditch.

Life changing though this was, oddly enough, this had a lot of competition for the weirdest thing in Jane’s life.

Her best friend since grade school, Zeb, finally had an actual date…with a woman, and not just any woman, a werewolf.

And now that she’s a vampire, Jane can see her that her Great Aunt Jettie never went into the light, and her ghostly form is still hanging around Jane’s house and is now dating Jane’s recently deceased Grandpa Fred.

And Mama…oh don’t get her started on Mama…

Then Jane realizes that there is something worse than being fired, mistaken for a prize buck and being turned into a vampire…telling her Mama she’s now a vampire

Take vampires, werewolves, ghosts and add a whole lot of snarky humor and you have Molly Harper’s Jane Jameson series. I don’t believe I have ever laughed out loud as much as I have while listening to this series. That crazy woman in the car next to you laughing like a loon is me…*smile and wave*.

Jane is the perfect blend of the well read librarian, with a real Jane Austin obsession, and the queen of snarky comments. I love snarky heroines.

Her friends are crazy, but her family is absolutely insane, from the overbearing southern mother, to the jealous, former cheerleader sister who wants Jane’s house and all the family collectibles, and the grandmother who keeps killing off husbands.

Gabriel is sexy, overprotective and mysterious as all good vampire boyfriends should be, and Jane’s new vampire friend and Gabriel’s old enemy, Richard “Dick” Chaney is a riot.

Since this is a first person perspective story, you get a full dose of the quirky character that is Jane Jameson.

This a hysterical series and I am breezing right through it. If you like your paranormal romance with a great deal of fun, you need to take a trip with me to Half-Moon Hollow, Kentucky where crazy is just the same old-same old.

“All my life, I’ve wanted to be more interesting than I am, special,” I said, turning to Gabriel and, I’m sure, grinning like an idiot. “And now it seems I’ve got ‘special’ out the ying-yang. I don’t know if I can handle it.”

He made an inscrutable face. “I’ve been a vampire for a long time, and I’ve never it described quite like that.”

“I do have a way with words,” I admitted.

I crossed my arms. “OK, lighting round. Real or fake: Werewolves”

“Real, but he’s actually a were-ape.”

I decided to explore that later. “Aliens?”

“Real.” He shrugged. “Some work real magic, and others are deluded children in black makeup and ill-fitting clothes.”

“Good to know,” I said soberly. “Wait, what about zombies? I couldn’t even get through the preview for Dawn of the Dead without covering my eyes.”

I made a little small distressed sound. He chuckled, something I noticed was becoming more frequent.

“I know Dracula was a real person, but is he still, you know, around?” I asked.

“No one knows for sure. He’s a bit like our Elvis. Lots of vampires have claimed to see him, but there’s never been documented proof. You ask a lot of questions.”

“I’m a librarian. The learning curve is steep,” I said, ever so sassily jutting my chin forward.

“You’re going to be an interesting person to know, Jane Jameson,” he said, leaning forward and brushing his mouth across mine.

Audiobook Review: Best Wishes by Helen Harper
« To Tempt an Irish Rogue by Kaitlin O’Riley
Review: Wild About You by Kerrelyn Sparks »

One response to “Audiobook Review: Nice Girls Don’t Have Fangs by Molly Harper”