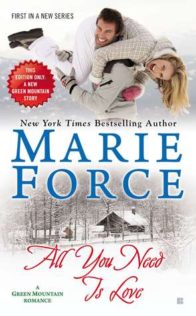 All You Need is Love (Green Mountain, #1) by Marie Force

The family-run Green Mountain Country Store is cherished by locals as a reminder of simpler times. The Abbott children are determined to keep it that way—but their father has different plans…

When Cameron Murphy heads to Vermont to build a website for a new client, she imagines a more relaxing trip than she gets. After wrecking her car by colliding with the town moose, she meets the most handsome hero she’s ever seen. Unfortunately, her savior, Will Abbott, is also the son of her client—and he wants nothing to do with the new website or the city girl creating it.

For all Will cares, Cameron can march her fancy boots right out of town and out of his family’s business. But he can’t seem to get her out of his head. As his family’s dispute heats up, so does the chemistry between the two, leaving them wondering if simple is better after all—especially when it comes to matters of the heart.

When Cameron arrives in Vermont, she arrives in a big way–crashing into the beloved town Moose, Fred. Fred survived the accident a lot better than Cameron’s brand new Mini Cooper. Cameron is pretty sure a totaled car might be worth the suffering when she gets a good look at the man who comes to her rescue. Her first thought was that he was the best smelling, most attractive mountain man in existence. Even his gruff opinion of her driving and her city boots couldn’t cool her interest.

What does throw off her confident is the news that her rescuer is Will Abbot was one of the people she was supposed to meet tomorrow, and he and his siblings are not too happy that their father went behind their backs to invite Cameron to discuss a website. Will and his siblings don’t believe that their business needs a website. So her car isn’t the only thing that will crash and burn on this trip. Cameron needs to land this account to keep her website design company going.

Even if she didn’t need this account, after meeting the Abbott Family and seeing their store, Cameron knows she wants to share their store and their story with the world. A quaint country store in the mountains owned for three generations and now by ten siblings who all contribute to it by either running the store or providing the Vermont Made products. Cameron wants to design a website that does more than allow someone to purchase maple syrup, she wants people to know the family behind the products.

If she can convince them that their business needs this website, she knows that this will change all their lives, in more ways than one.

THOUGHTS:
My mother just loves Marie Force and has read all her other series. I haven’t had a chance to read her books yet, but when I was offered this ARC, I decided to give it a chance.

I thought this was such a sweet romance. You can’t help but love the Abbot Family and I can’t wait to see what happens with Will’s widowed sister and the sweet mechanic who has been waiting in the wings, or brother Colton up on his mountain with no electricity making his maple syrup.  I don’t know if all 10 kids will get their own stories, but they are all single.

This story makes you think about snuggling up by the fire with someone special.  It definitely makes you want to take a vacation to Vermont, except the thought of someplace with even more snow than we had this winter would make me run the other way.

This is definitely a series I want to follow.

“This was great, Colton.  Thanks so much for showing me your home and your business.”  She extended a hand to him.

“Definitely a pleasure.”  He bent gallantly to place a kiss on the back of her hand.  “Hope to see you again soon.”

“And Sunday dinner with the Abbots gets more interesting.”

“Knock it off, Colton,” Will said in a sinister tone she wouldn’t have thought him capable of.  Surprise, surprise.

Colton only laughed at his brother, which seemed to further infuriate Will.

Cameron hoped he wasn’t mad at her, too.

Colton walked them to the truck, where Will held the door for her and gave it a harder-than-usual slam when she was settled in the cab.

In the side-view mirror, she saw him exchange a few heated words with Colton that made Colton laugh again.  Judging by the slam of the driver’s door and the stormy expression on Will’s face, he hadn’t appreciated his brother laughing at whatever he’d said to him.

He turned the truck around and sent a trail of snow flying behind them that just missed Colton.

“What is the matter?”  Cameron asked as he took the first turn that curved down the winding hill.

His gruff demeanor was reminiscent of the night they met.  “Clearly something is bugging you.  I wish you’d just tell me—“

The truck fishtailed violently as he slammed on the brakes, threw off his seat belt and reached for her.

Cameron barely had time to register her surprise before he was kissing her. And Oh. My. God. The man could kiss.  She all but melted into him as he cupped her face with one hand and fisted her hair with the other, his lips moving over hers, softly yet insistently.

When the shock wore off, she realized he was waiting for her to participate before he took it any further.  Wanting to encourage him, she put her arms around his neck and dabbed her tongue along his lower lip.

He took the hint and growled as he gave her his tongue in teasing increments that made her needy for more.  As he shifted closer to her, the truck lurched forward, sliding on the ice.

“Shit,” he said, as he broke free from her to control the truck’s slide toward the guardrail that was the only thing between them and a plunge into the ravine far below.

Cameron tried to remain calm, but between the ice and the guardrail and that incendiary kiss, she was anything but calm.

After what seemed like an interminable slide, they landed with a hard smack against the guardrail.

Cameron had never been so grateful for piece of metal in her life.  She took a quick look out her window and just as quickly looked away when her stomach turned at the view of the sheer drop inches to her right.

“At least you’ll never forget our first kiss,” Will said cheerfully, as if was no big deal to have nearly slid off the road.

“I think it’s safe to say I would’ve remember it without the near-death experience thrown in.”

“Stop gloating and get us out of here.”

There was that endearment again, setting of a tsunami inside her when it came from him.  “Your view is clearly not the same as mine.”

“Stay calm.  I’ve got this.”  He reached for her hand, but she pushed him back.

“Two hands on the wheel this time.  How did we even end up down here?”

“You distracted me, and my foot slipped of the brake.”

The truck lurched forward, and Cameron grabbed hold of the door and the seat, as if that would do any good if the guardrail gave way.  “How long can the guardrail hold the weight of this big truck?”

“We’ll be long gone before the guardrail gets tired.”

While his assurances were somewhat comforting, she wanted out of there immediately.  She startled when a hulking figure appeared at the driver’s side window.

Colton’s lazy grin unfolded slowly across his face.  “Got yourself into a bit of a pickle, bro?”

Will scowled at the apparent affront to his manhood.  “I told you I’ve got this.”

“And yet we’re still clinging to the road by a thread!”

“I heard the crunch of metal up at the house and figure I ought to investigate.”

“Would you mind terribly if I got out until we’re actually fine?”  Cameron asked, making Colton snicker. 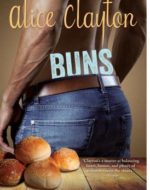 Review: Roman Crazy by Alice Clayton and Nina Bocci
« Audiobook Review: How to Run with a Naked Werewolf by Molly Harper
Blood from a Silver Cross by E.S. Moore »