Check out a Question and Answer session with Jill Shalvis and enter to win a copy of Rumor Has It.

Giveaway open to U.S. Residents only. 18 years and older please! 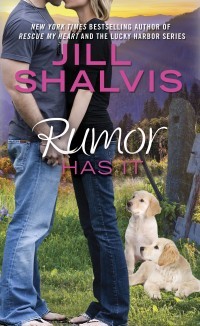 He’ll help unleash the new woman in her…

Special Ops soldier Griffin Reid doesn’t exactly have happy memories of growing up in Sunshine, Idaho. He’s only come back to recover from a war injury, and while he refuses to admit he’s in a weakened state, he finds comfort in the last person he’d expect.

Kate Evans teaches fourth grade science in Sunshine, the place she’s always called home. Dreaming of graduate school and a happily-ever-after, she’s desperate to break out of the monotony of Sunshine. Luckily, a certain sexy man has just come back into her life.

To Griffin, Kate as always been his little sister’s friend, but now he’s finding her to be so much more. As both attempt to forge their paths, they must decide if their passionate connection can turn into something lasting.

After Griffin Reid is almost killed by an IED in Afghanistan, the first place he thinks about after leaving the army is returning home to Sunshine, a place he couldn’t get away from fast enough 10 years ago. Even though he tries to hide the fact that he almost lost his life, the scar across his temple and the debilitating migraine headaches are a giveaway that Griffin hasn’t just come home for his sister’s wedding.

One of the first people he runs into upon returning to Sunshine is Little Katie Evans, except she wants to be known as Kate now. Such a grown up name, but then again, Kate has certainly grown up since he first left Idaho. When Griffin’s thoughts turn from what will he do next, to the curvy Kate with her strawberry blonde curls and her oddly sexy, prim teacher outfits, his sister has a fit. Holly is worried that Griffin’s slick charm and womanizing ways will break Kate’s heart. A heart which has belonged to Griffin since she was a young girl.

Just when she’s on the verge of getting the man of her dreams, she’ll have to choose between a possible relationship with Griffin and the Science Scholarship waiting for her in San Diego.

THOUGHTS:
I am a sucker for a good friends to lovers story. I really enjoyed Kate’s awkward attempts to seduce Griffin, almost as much as Griffin does. Griffin makes Kate so nervous, she constantly spouts odd science facts at him and although she is embarrassed, he finds her charming.

I liked that although Griffin received a serious injury and we see him suffer a few times from the migraines, his injury isn’t the complete focus of his return to Sunshine. He isn’t there hiding or healing. He realizes that he misses his family and the Town, and maybe what he ran away from really wasn’t as bad as his teenage mind made it out to be. Although he has a strained relationship with his father, who doesn’t exact run up to him and spin him around with joy at his return, they try to work through their anger at each other.

I also enjoyed how grown-up Griffin finally takes notice of Kate (although he tries not to since his sister warned him away with bodily harm) and he begins to realize that that it is not only returning home that is healing his head, but the time he spends with Kate that is bringing him such a feeling of peace.

I thought book #3 of the series (which was technically a friends to lovers story also) was only just so-so. This was a much more enjoyable story and I found myself racing through it.

He got lucky that there was a bathroom attached to the office. He was entirely too large for the postage-size room, but comfort was a distant need behind the waves of pain rolling over him. As always when hit with a massive migraine, he was nearly blinded by it, and he was struck deaf and dumb as well. All he could do was turn off the light, lie on the cold linoleum floor, and pray for a quick finish.

He wasn’t lucky enough for that.

It might have been only minutes or an entire year later when he heard someone open the bathroom door. the light came on, which was like being stabbed with lighting bolts. With a groan, Grif squeezed his eyes shut. “Off,” he managed.

Mercifully, this was followed by the light going off. Next came the wince-inducing click, click, click of Kate’s heels, and her soft, warm hand brushing his forehead. “What is it?” she asked. “What’s wrong?”

He heard the rustle of her clothing as she crouched at his side. “Are you hurt?” she asked.

Nope. Just sick as a dog, and if she didn’t zip it, she was going to see just how sick firsthand. That would suck. So did the fact that he couldn’t even open his eyes and see how sexy she looked with that sweater hugging her curves. He couldn’t even steal a peek up her skirt–which killed him because this wasn’t her usual cargo teacher skirt. Nope, this baby was short, black, and slinky. Reaching out, he clamped a hand over her wrist, halting her from patting his body, trying to find where he was hurt. Or so he assumed. Maybe she was into copping feels of sick guys.

“Griffin.” She sounded worried, which he had to admit was kind of nice. “You’re shaking.”

Yes, and sweating, too, and utterly incapable of functioning, thank you very much. But he forced his eyes to slit open. “Just a headache.”

She stared at him. “It’s more than a headache. Is it your…injury?” she whispered, saying the word like it was a state secret since she knew he didn’t want to talk about it.

Christ, she was sweet. The sweetest person he’d ever known. Holly was right. She was way too sweet for the likes of him. “I’ll be okay.”

“Griffin, you’re flat on your back and so pale your skin’s see-through.”

She made an annoyed sound. “Of course you are. You’re a guy. Has this happened before? How do you treat it?”

He shouldn’t be teasing her when he couldn’t even lift his own head, but he couldn’t seem to temper himself around her. He wondered if this was what it was like for her when she let loose with those science facts of hers. “Yeah,” he said. “Down and dirty, no-hold-barred sex. Cures me every time.”

Unfortunately, he couldn’t have pleased her right now to save his life. And wasn’t that just the bitch of it.

“I’m going to get Adam,” she said, calm and sure, and started to rise.

He tightened his grip on her wrist. “No, don’t. It’s his night.”

Her hands went to his chest. They were small but strong and sure, and he loved the feel of them on him. Too much. And he began to revise what he might be able to accomplish with a migraine.

“Fine.” She shifted, and her clothing rustled again. Unable to beat back the curiosity, he slit his eyes open in time to see her shimmying her pencil skirt higher on her thighs. When he shifted to take in the delicious flash of thigh-high stockings, the movement penetrated his skull, giving him a stab of fierce, icy pain, he gasped with it. Oh Christ. He’d been afraid he was going to die on this bathroom floor, but suddenly he was afraid he wasn’t going to die.

Kate had lowered herself to the tile and now gently cradled his head in her lap. “Better?” she murmured, stroking her cool hands on his overheated temples.

Her touch was like heaven, and he heard a moan. His.

“Oh, you poor, stupidly stubborn man,” she whispered softly, and gently massaged his scalp and temples until he wanted to whimper with relief.

She didn’t push him to talk or try to get him up; she just ran those fingers over him until he was certain he wasn’t going to be sick again.

She said nothing until he managed to very carefully look at her. “If you won’t let me call anyone for you,” she said. “I’m going to help you home.”

“Really? Because you can’t even open your eyes all the way, Big Alpha Man. How the hell do you think you can drive?”

“You talk to your students in that tone?”

If he could have sighed without feeling like his head was going to fall off, he would have.