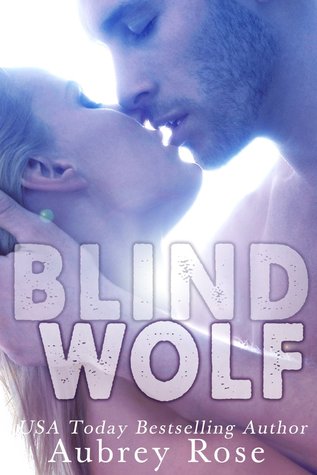 Julia has never been on a date in her life. She’s a curvy girl with no money, no education, and no way out of the town she works in as a library assistant… until Damien shows up. He’s just like the prince charming Julia always imagined would sweep her off of her feet. There are just a few things standing in the way of true happiness: he’s blind, he’s dating someone, and he’s WAY out of her league.

Oh, and he’s a werewolf.

Damien lost his eyes two years ago in a wolf battle. Ever since then, the straggler pack of disabled wolves he leads has been searching for a place to call home. One house seems like the perfect choice, but Damien realizes too late that the person who lives there is the girl he met at the library. The human girl. Damien is torn between loyalty to his pack and raw lusting desire for the girl who haunts his dreams day and night.

She’s a human. How could she be his true mate?

Damien is an alpha wolf who lost his vision in a vicious fight. He and a few misfit wolves are looking for a new area to settle down and create their own pack, but finding a quiet location that doesn’t already include a wolf pack isn’t easy. Their plan is to buy a plot of land to build their own commune and Damien is planning on mating with their only female member.

Upon their arrival in Town, Damien heads off to the local college library to look for books on indigenous creatures and local myths to see if there is anything about odd wolf sighting in the area. At the library he meets Julia, who is an assistant at the library. He is drawn to her scent as soon as he meets her. He would swear that she is his mate, but she is human.

He tries to avoid Julia, but is even further drawn to her when one of the foreclosure houses they look at belongs to Julia’s grandmother.

Damon can’t stop thinking about Julia and although it may mean the end of his newly formed pack, he wants to forget his agreement to mate and he wants nothing more than to take Julia as his mate. A confrontation with another werewolf, in front of Julia, let’s the wolf out of the bag and might mean that the pack’s plans to settle in the Town are over if a rival pack has already claimed it.

THOUGHTS:
I picked up this short story about a blind werewolf because I was drawn to the novelty of it and was interested to see how his handicap would be presented in the story. Since it was only about 80 or so pages, I squeezed it in one Sunday morning and was absolutely disappointed.

I disliked Julia to begin with. She is an overweight heroine who is presented as someone who has never had a date and she is still getting teased and picked on by the college boys for her weight issue. She is quite a bit of a sad sack. So even is presented with a possible werewolf love interest, it seems like she would be jumping at any attention shown to her regardless of the fact that he is a werewolf, blind or not. He could have been a three-legged troll and she would have fallen for him since no one else looked at her.

I guess if you are a blind Alpha werewolf, the only pack you can get are a few misfits and as Alpha, the one female in his group is a very young woman and she agrees to mate with him although she is drawn to the other young male. Although Damon doesn’t want her, especially after finding Julia, he has to keep warning off the other male because he is supposed to do what is best for the pack. Julia is also very jealous of the pretty, young girl with Damon and does more sad sack lamenting of how pathetic she is to look at Damon when he has such a pretty girl at his side.

Also Damon’s interest in Julia keeps going back to her being his mate. At this point, he really doesn’t know much about her at all, but he wants to forget the pack’s plans so he can have her. There really is no getting to know you and falling in love in this short story, just the push of a mating instinct. Even Julia (for a quick minute) is put off by the fact that he wants her due to this instinct rather than the 10 minutes he spent in her presence.

The only real example of the problems associated with being a blind werewolf was when Damon has to fight another werewolf to protect Julia and he explains (internally) that he is listening for the moment that the other wolf moves on the loose stones in his initial attack but that after that initial attack, he would be at a disadvantage if the other wolf was able to be more stealthy, so he has to take him down quickly.

The writing was very beginner and that could have been forgiven, but the characters and the storyline just didn’t hold any interest. This was the first book in a four book series, a quick read over at Goodreads told me what to expect from the other three parts and it was enough to let me know that I didn’t have any interest in reading the rest.

Like this post? Share it with the rest of the world. --->
« Can an author plagiarize their own work & will we continue to pay?
Loving an Ugly Beast by Danielle Monsch »