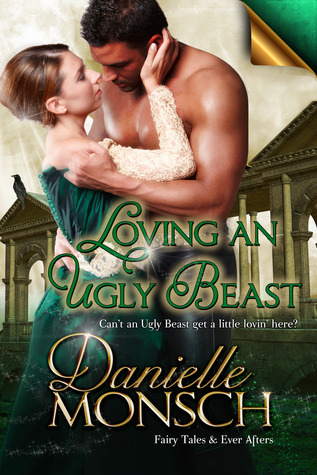 Known as Beast in his village for both his hulking size and multitude of scars, Benton long ago resigned himself to a life without love and was content with his solitary existence. That is until Nissa entered his life.

Plain and plain-spoken, Nissa came to the village three years ago looking for a fresh start and a quiet life. She had both until the day her friend Benton disappears and a new man arrives at the village – handsome, charming, and intent on courting her.

A fairy godmother gives Benton his greatest wish. Now that he is a beauty and not a beast, Benton intends to make Nissa fall in love with him. However, scars don’t have to be visible to exist. Will Nissa’s past destroy any chance of their Happily Ever After?

Benton wants nothing more than he wants Nissa. He doesn’t care that no one else thinks she is beautiful. She is beautiful to him, but she doesn’t deserve a scarred beast such as him. When a crazy old woman comes to him declaring herself his fairy godmother, he goes along with her talk. What’s the harm? He agrees that having Nissa would be his greatest wish and that the only way to achieve that would be for the “beast” to disappear and if he were handsome, he could win her heart.

The fairy godmother grants his wish, but let’s him know that if anyone ever found out that he was in fact Benton, he would again return to his life and looks as Benton.

Meanwhile, Nissa and the Towns people keep looking for the missing Benton. With his brawn he provides wood for the villagers and his tracking ability, provides fresh meat. When he returns to the Village a few weeks later, he is now Byron, a handsome and slightly built artist. All the young women in the village fawn over him and the Town leaders can’t wait for him to leave town.

Nissa is uncomfortable with Byron’s constant attentions since he is so handsome and she is so plain, and she can’t help worry about what has happened to Benton and why would he abandon her without a word.

There was a definite message about how we judge people simply by how they look (like that will ever change). Benton was a burly man with scars on his face and body and many of the women whispered of how they would take him to bed if only they could bring a bag for his face. When Benton is transformed to Byron, he comments to Nissa that people don’t look past his face to find out if he has any brains.

At first with Nissa believing that Byron is too attractive to be interested in a plain, unattractive girl like herself, I was initially put off by what seemed like Nissa thinking herself good enough for an ugly Benton, but not the handsome Byron. This diminishes her feelings for Benton as only—that’s the best someone like me can have. Later in the story we understand what Nissa has against people who are too attractive.

After Benton is returned to his “beastly” self there is more twists to the story and we finally understand the fairy godmother’s interest in Benton and Nissa.

Fairy tale based stories are usually not stories that I go for, although some stories have had that basic underlying “don’t just a book by it’s cover” message. This was a decent rewrite with interesting twists if you can ignore some of the too modern conversations.

He shrugged, going back to the wood pile. “I get aggressive, bad things happen.”

Definitely a story, but not a good one, and not for today—not when they had a picnic spread out before them that she’d been looking forward to all week. Nissa finagled herself between him and the woodpile and gave a teasing smile up into his scarred, grim face. “I have brought absolutely delicious food for us to enjoy together, and I am not going to let you work anymore while I’m here. Go get cleaned up so we can eat.”

He looked down at her, and though his features didn’t change, his eyes brightened, the heavy burden he carried dissolving for the moment. “Will you read to me after?”

“Of course I will, though I’m still waiting to hear when you’re going to read to me like I’ve been asking you to do for months.” She placed her hands on his arms and stretched upwards, going on tip-toe to add a few inches of height. “Please Benton.”

Since she was the one who had taught him how to read, he couldn’t use illiteracy as an excuse, but he had come up with every other possible reason not to fulfill her request. For someone as straightforward as he was, it was almost impressive how cagey he became in his efforts to avoid the subject.

His eyes widened the barest fraction before he turned away. “You have a beautiful voice,” he said and, not waiting for a reply, walked to the little lake behind his house.

Nissa was as rooted to the earth as the great maple trees behind her. Benton had never complimented her in such a direct manner, and she had no idea he like her voice. There was nothing special about it. It wasn’t too squeaky or too growly, and when she sang cats didn’t join in, but those weren’t exactly qualities to brag about. Yet, he called it beautiful.

Her cheeks were so warm she used her cool palms to lessen the heat, and only when her hands touched the enflamed skin did she realize the was smiling. Enough of that, Nissa. You are not a schoolgirl.

Yet she couldn’t force the smile from her face the rest of the day.

And now the day was ending as it often did, with them sitting against a thick oak a few feet away from the lake’s edge while Nissa read. Today’s selection was love sonnets at Benton’s request, the eloquent, sometimes naughty verses stoking Nissa’s longing for the man whose head now lay in her lap.

One hand held the book while the other stroked his thick, dark hair. As she finished reading the last sonnet, she closed the book but couldn’t quite bring herself to stop this allowable touch. “Benton?”

He looked up at her, and for one unguarded moment his eyes shone from within with a fierce, hungry light. A shiver—part warning, part longing—snaked over her skin and left raw, exposed nerves in its wake. “Benton?”

With lightning movements, he turned and rose to his feet, careful to keep both his gaze and his body away from her. “Sorry.”

Her first instinct was to ask him what he was sorry for, but she caught those words behind her teeth, forbidding them to escape. Benton had been acting strange for the last two months, alternating between uncomfortable intensity and an even deeper anti-social streak than what she’d experienced from him even in those first days of their acquaintance. Instincts warned her that finding out why would change everything, and while part of her yearned for some form of change, experience shouted change hurt, and what she desired wasn’t guaranteed. She was no Pandora. She’d hold off opening that box a little longer.