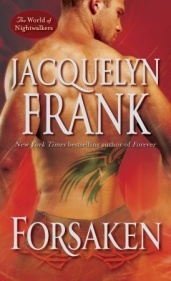 ORDER A COPY: Forsaken: The World of Nightwalkers

As a mercenary, Leo Alvarez has signed on for a lot—but he never signed on for his best friend becoming host to the soul of an ancient Egyptian pharaoh. Jackson is now inhabited by a Bodywalker, and Leo is forced to grapple with a realm of supernatural beings far more dangerous than anything he’s ever encountered.

But when Jackson is wounded by an attack from a demon god, Leo must team up with another supernatural creature—a Night Angel—to save his friend from utter destruction. With skin as black as midnight, hair as white as snow, and a body of pure perfection, the Night Angel arouses a burning desire in Leo, even as he refuses to be intimidated by her power—or the power of those who would destroy his friend. An unusual alliance is forged, electrified by sexual temptation, and together the two must unite their strengths to bring down a supreme evil.

Leo Alvarez thought he was the baddest badass in Town. Former Ranger, now mercenary for hire, he feared nothing and no one. At least he did until he found out there were truly things that went bump in the night. Leo is trying to pull his life together after being tortured by a sadistic Bodywalker. Chatha is an evil Bodywalker who hid his maliciousness behind the face of a Down syndrome man. When Leo went to assist the innocent man, he saw too late the evil that hid within. If he had not been of use to Kamenwati as a bargaining chip, Leo would still be chained down while Chatha performed his sick game of Operation on Leo, plucking out his organs and healing him over and over again so Leo couldn’t even die to escape the horror and pain.

So it is quite understandable that Leo is feeling angry and betrayed to find out this his best friend and his sister that he helped raise are now both Bodywalkers–one of “them.” Leo is afraid that there is now a monster living in the bodies of the only family he has left.

Yet when Jackson is struck down by a malicious God, Leo knows that he is the best candidate to go find someone who doesn’t want to be found, a powerful Djinn. But the Night Angel, Faith, won’t let Leo go alone to seek out another Nightwalker on his own. As a Night Angel, Faith can see Leo’s pain and anger clearly written on his “scroll”. Their quest is to find the Djinn, but Faith also plans to show Leo that like humans, there are Nightwalkers that are evil, but many more who are good.

When Faith and Leo are shown a possible future which includes love and family, will Leo look past his hatred and embrace this future or will he throw away an intense love to hold onto his prejudice and anger?

THOUGHTS:
This is a very interesting presentation of fear-based prejudices. Leo being a Hispanic man should be aware of being judged by what you are and not who you are, but after his torture, he is to willing too group all Nightwalkers into a single grouping. They have proven to him that he is too weak to fight them and so for the first time in his life, there is something that he fears.

Now that his eyes are open to the world of Nightwalkers, he has broken everything down to “us” (human) and “them” (everything else). When he first meets Faith, a Night Angel, her skin is varying shades of black, but Leo does not even notice the differences until later in the story when he starts to look at her as more than just a thing. Unlike the Gargoyles and Bodywalkers, a Night Angel can go out in the daytime, but they lose pigment and would pass for an albino. They also lose their strength and would be as weak as a human. It is once Faith looks more human, that Leo takes more notice of her curses and appearance. Although he admires her character, he constantly returns to little slights and digs like “you people.”

We know that human beings aren’t the most generous of souls to our own kind, and I am sure prejudices would burn strong and deep if there truly were “others” out there. I find it interesting that Jacquelyn Frank chooses someone who had grown up being unfairly judged by race, yet doesn’t see the failing in himself when he does it to others. Even after Faith and Leo are shown a future, where they feel the emotions they could have for each other, Leo bounces between looking at Faith with intense interest and anger for the false feelings forced upon him for one of “them.”

It takes a true epiphany for Leo to get past his own prejudices.

This was the first in the series where the Bodywalkers were secondary to the new paranormals introduced. We’ll see where it goes from here.

“You know, I actually find it comforting,” Leo said. “to know that your kind have the same complex pitfalls as any human might have.”

“Of course we do,” she said, jerking herself awkwardly to her feet and away from his reach. “We’re not animals. And even if we were, animals have emotions, too! If not then explain the devotion of a beloved pet, or…or the way a wolf mourns the death of its mate. We’re not cockroaches just scurrying about concerned with nothing but the finding of food!”

“I didn’t say I thought you were an emotionless cockroach!” Leo erupted, standing up and reaching for her arm. But she moved out of his reach and back pedaled away from him.

“You don’t have to say it,” she hissed at him, her fiery eyes burning like two yellow flames. “Your contempt oozes out of you like a tide. From the instant I met you you’ve done nothing but batter me with your obvious derision toward me and all of Nightwalker kind! But never you fear,” she said, her hands balling into fists. “As soon as this wish is made you’ll be quit of me and you’ll never have to set eyes on this thing“—she indicated herself with a jerking hand gesture—“any longer.”

She turned her back on him and stalked angrily away. He opened his mouth to recall her, to argue with her that she was overreacting and being too sensitive, but instead he went quiet and felt a forlorn sort of regret birth inside of him. He couldn’t argue against the truth. But neither could he help his feelings nor the horrifyingly overwhelming distrust that seethed through him whenever he came close to any one of these breeds.

And it was for the best that he hold on to that, he told himself. It was best that he never forget to be cautious, that he never turn his back on any of them. There was no telling if he, a simple mortal man, would ever survive if he did. He did not belong in this world of titans and demi-gods. He didn’t even want to now such things existed.

But it was better that he did, he argued with himself. His ignorance had cost him darly, had scarred him in a way he might never recover from.

But as she stopped at a desk across the room, shuffling through the books that were laid upon it, he found himself remembering things about her, things that told him what an honest, valiant heart she had.

No. It was an illusion, he whispered fiercely into his own psyche as the memory of the agony he had felt in that moment threatened to overwhelm him. It was all pure fantasy. Pure fiction.

And yet he couldn’t seem to stop himself as he crossed the distance between them. He stood behind her, struggling with himself so hard it was exhausting him.

“I was tortured.” Leo jerked with surprise as he said the words aloud. Why should she know that? Why would he want her to know that? She could just use it against him…

Faith turned around slowly, her surprise written all over her face. But he thought she was more surprised that he had confessed the thing to her than she was about the nature of the thing itself. Then he remembered she could see those words being written onto himself over and over again, and he knew there was no way she could have missed something so deeply ingrained onto his scroll..onto his soul.

“A Bodywalker named Chatha. He’s…on the outside he looks like a Down syndrome man. I don’t know if you know what that is…but suffice it to say, it’s sheep’s clothing. I let my guard down because I thought he was harmless. He got the drop on me and he…” Leo trailed off, his heart racing and sweat breaking out over every surface of his skin. “Anyway…it’s just going to take some time…I can’t be expected to just forget it.”

“No. I don’t expect you to forget it,” she said quietly. “But I do expect you to realize that one Nightwalker made of pure evil does not mean all Nightwalkers fit that same definition. And I expect you to be intelligent enough, evolved enough to understand that.”

One response to “Forsaken by Jacquelyn Frank”