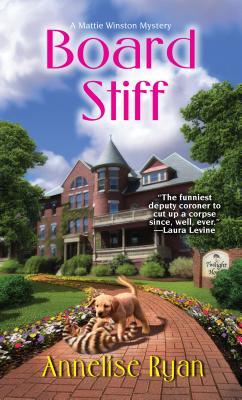 Sorenson, Wisconsin’s deputy coroner Mattie Winston is back on the job. . .in a nursing home examining the body of Bernie Chase–the now former president of the Twilight Home’s board of directors–who is covered in a powder used to turn liquids to solids. The home’s residents are certain Bernie was offing the patients who cost him too much. . .and the patient that found him can’t remember a thing.

Mattie Winston has returned to her job as the Deputy coroner. Mattie had quit to fan the flames of a relationship with her investigative partner, Det. Steve Hurley a few months ago, but after they finally got to create a bonfire, the flames were doused when Hurley’s ex-wife—wife—soon-to-be ex-wife…whatever, showed up with a fifteen-year-old kid which she claimed was Hurley’s. Thankfully, Mattie’s replacement at the coroner’s office turned out to be allergic to formaldehyde allowing Mattie to return to work while Hurley figures out how to handle his new fatherhood.

But returning to the job means, Mattie is available to be dragged by Irene Keller over to the Twilight Retirement Home to check out the suddenly dead body of the owner, Bernard Chase. Nothing about the body screams accidental death and Mattie has a whole building full of suspects. Rumor has it that Bernie was killing off the bedridden clients once their care started becoming too costly so none of the residents are too sad to see Bernie kick off.

As if the list of those wanting to see Bernie go bye-bye isn’t long enough, there is a soon to be ex-wife and a secret mistress, as well as an unknown silent partner to find and add to the list of suspects.

Meanwhile, Mattie is getting dragged into her sister’s marital problems when her inappropriate and annoying brother-in-law is tossed out of the house after he made bad investments and lost all the family’s money without mentioning it to Mattie’s sister. So he pleads with Mattie to help get his family back, all without making one boob reference. He must be desperate.

Hurley and Mattie might have cooled things off for now “officially” due to Mattie returning as Hurley’s partner, but it seems no one informed their hormones and they find themselves squeezing in quickies whenever an opportunity or two or three presents itself.

Mattie needs to catch the killer while not getting caught with her pants down by her boss and friend, Izzy, or she’ll risk losing her job permanently this time.

THOUGHTS (w/ spoilers of previous books):
I like the humor mixed with the mystery which is presented in these Mattie Winston stories. You can’t help by like Mattie who is your average, everyday woman. She needs to get to the gym and lose weight but her addiction to all things calorically challenged gets in her way. Although she is not perfect, Hurley still very much in love/lust with Mattie.

The first few books teased about the sexual tension between Mattie and Hurley and an almost adolescent Mattie is constantly give us the “does he or doesn’t he like me.” At the end of book 4, Mattie gives up her job and finally jumps in bed with the very happy Hurley. Except, once the deed was done, there is a knock on the door and Steve’s wife (who he thought was his ex-wife but she never filed the papers) shows up with a daughter who she claimed was Steve’s and told him they had no place to live and could they stay with him for now. At that point I despaired that the next book would be all back and forth with Hurley and what to do about the wife, and Mattie and what to do about her job, anything to keep the two apart, and ending with Hurley ready to commit just as Mattie gets her job back. I was pleasantly surprised that Annelise Ryan didn’t torment us with such a bad plotline.

In Board Stiff, Mattie has just returned to her job while Steve sorts out his life. This is her first case back and she hasn’t seen Steve for a few months. She keeps indicating to Hurley that they need to keep their relationship professionally — although she keeps doing this while putting her clothes back on. So between quickies which are keeping us all entertained, we get an interesting investigation into the murder at the retirement home.

The Mattie Winston Mysteries are fun, lighthearted and not overly complicated murder plots, but they will keep you guessing and investigating. There are more changes in the future for Mattie and Hurley at the end of this story, and it will be interesting to see where they go in the next story.

I venture over toward the group and ask Hurley if I can speak to him a moment. This earns me several looks of contempt, and one of the women goes so far as to voice her objection.

“Hey, wait your turn, missy!” she says. The woman is well built and attractive for her age with carefully coiffed, snow-white hair, hooker-red fingernails, and a carefully made up face. She is dressed in tight black slacks, a low-cut red blouse, and shiny red pumps, which strike me as inappropriate for a women her age until I see that she is sitting in a motorized wheelchair. Hell, the woman could wear six-inch stilettos if she wanted to because she doesn’t have to walk anywhere in them.

“I’ll give him back to you,” I say. “We work together and I just need to speak to him for a minute.”

Clearly she is not satisfied with my answer because she motors toward me, grabs my arm, and pulls me aside. “You need to make it quick, darling, because I’m working my best magic on this guy and right now he’s the only man in this facility who looks like he’s capable of sustaining a stiffy for any length of time. Hell, half these guys can’t even get a stiff, much less maintain one. I once tried to talk Bernie Chase into salting the food with Viagra, arguing that it would help with is safety record because it would keep some of these old fools from rolling out of bed. But he wouldn’t go for it and now I’m stuck with a bunch of limp noodles. Don’t let this wheelchair fool you. I’m not dead in that part of my body yet, and while I’m not saying it’s been a longtime since I last had sex, I do vaguely recall seeing a T-Rex thunder by during my post-coital haze, so I’m in need here, understand?”

“And you think you can score with the detective?” I say, barely suppressing a smile.

She then does something so shocking it makes me back up a step. First, she turns her wheelchair away from the others so that only I can see her face. She contorts her lips and pops both an upper and lower denture loose, letting them stick part way out of her mouth for a second before she sucks them back in. Then she leans in closer to me and wiggles her carefully drawn eyebrows. “Play a skin flute once without the teeth and you got ’em for life,” she whispers.

It takes a lot to shock me. If you work as a nurse in an ER for any length of time you see and hear things that would mortify most people. Despite that, Snow White’s comment makes me gasp and clamp a hand over my mouth.

Hurley hears it and looks over at us. “Did Gwen just confess?” he asks with half a grin.

Gwen gives me a smug smile and motors back over to Hurley. “I’ll share everything I know with you,” she says, stroking his arm. “You come back and find me when you’re done talking to the big-boned blonde.”

I see Hurley’s mouth twitch and know he’s trying to suppress a smile.