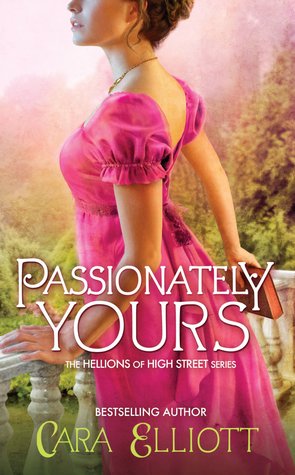 ORDER A COPY: Passionately Yours

Proper young ladies of the ton-especially ones who have very small dowries-are not encouraged to have an interest in intellectual pursuits. Indeed, the only thing they are encouraged to pursue is an eligible bachelor.

Preferably one with both a title and a fortune.

So, the headstrong, opinionated Sloane sisters must keep their passions a secret.

Ah, but secret passions are wont to lead a lady into trouble . . .

Caroline Sloane is vacationing in Bath with her mother and spending some time with old friends and making some new ones. Caro misses the companionship of her newly married sisters feels and she has found a kindred spirit in Isobel Urquehart. It wasn’t until after Caro and Isobel are attacked while walking back from an excursion, that Caro learns that Isobel’s brother is none other than Alec McClellan, Lord Strathcona.

Caroline hasn’t seen Alec since the incident at Dunbar Castle in Scotland when Caro and her sister, Anna and her now husband, Devlin, helped Alec defeat some Scottish nationalists who decided that violence was needed to further their cause.

Caro knows that Alec sees her and her sisters as the Hellions of High Street that they are known to be, and he doesn’t approve of her being involved in trying to find out who was behind their attack. But her father raised them in the most unladylike way, allowing Caro to think for herself and how a young woman can protect herself from danger.

Due to Caro’s Hellion upbringing, she is more than up to the task of helping Alec figure out who is trying to hurt him and his sister.

THOUGHTS:
I really like Cara’s heroines. They have an inner strength and a sharp wit. These Hellions even more than the rest since they were raised by a father with a love for adventure who dragged his girls along. He made sure they could protect themselves in some of the more dangerous areas of the world and taught them interesting activities like lock picking.

Like most of us, Caro compares herself to her old sisters and their accomplishments and finds them lacking. They are all writers but one older sister writes thrilling novels of adventure and the other writes political essays (both under an assumed male name, of course). Caro find her own poetry attempts lack a passion and she is looking for adventure and excitement.

Alec is a little gruff around the edges, but still a very likeable hero.

My only complaint here is that there seemed to be a noticeable lack of foreplay in their sexual adventures. I am still a bit confused why a panic attack makes her feel the need to start stripping and how quickly she undressed herself from all the layers and corset and then redressed herself quickly as well afterwards when she was embarrassed. These ladies usually require a maid or two to help them dress in the morning, but Cara made it sound like Caro tossed her clothes back on and ran out when Alec probably could have had a cigarette in the time it should have taken her.

Relief flooded through him, but quickly gave way to another fear. Given her fiercely adventurous spirit and utter disregard for danger, Caro Sloane was all to likely to stray into trouble. “Then what the devil are you doing, wandering around all on your own?”

Caro’s brows pinched together in a frown. “I wished to explore how the dead ends are designed.” Her mouth thinned as well. “Not, I might add, that it should be any concern of yours.”

She turned away, making a show of studying the tightly twined yew branches. “Really sir, I don’t understand why you always feel compelled to snap and snarl at me. Granted, I have many faults, but taking a simple stroll in a maze ought not elicit your ire.”

He shuffled his feet, shifting his position just a fraction. Dear God–was that a glint of tears flickering through her downcast lashes?

“My apologies,” he said gruffly. “I did not mean to snap. Or snarl. I saw the two of you enter alone and I was…concerned.”

She lifted her head, and the shadow of her bonnet brim made it impossible to see her eyes. “To my knowledge, there are no lurking dragons hidden in the shrubbery, waiting to devour unwary patrons.” A dappling of sunlight caught the curl of a wry smile. “The management would likely charge extra for experiencing the thrill of such a danger.”

The sight of her lovely mouth caused a clenching low in his belly…well, to be honest, it was a little lower than his belly, but Alec tried to ignore his baser instincts.

“Let us not jest about dangers,” he replied. “I am sorry if I am, as Isobel terms it, acting like a mother hen. But I suppose recent events have made me feel overprotective.”

“Such sentiment does you credit, sir,” said Caro softly. “She may tease you, but be assured that any sister would be happy to have such a thoughtful brother take on the role of her knight in shining armor.”

Alex moved a step closer. “I, um…” How ridiculous to be standing there stammering like a pulling schoolboy. He pulled himself together. “That is, I am of course concerned for your safety as well.”

“That is very kind of you.” Caro withdrew a little father into the shadows. “However, that’s really not necessary.” She exaggerated a flex of her fists. “I can take care of myself.”

Without thinking, he covered the distance between them. “You shouldn’t have to.”

“I’m not your responsibility, Lord Strathcona.”

At that her head jerked up, a look of surprise deepened by an undertone of something else.

Blast–he wished he could fathom what it was.

“Are we friends?” she asked tentatively. “At times, it certainly doesn’t feel like it.”

Alex reached out to tuck an errant curl behind her ear.

Don’t The warning voice in his head was in fine fettle this afternoon–clear, loud, insistent. He ought to listen.

His fingers grazed the delicate shell-pink curve, the merest gossamer touch of flesh against flesh. Yet it sent a jolt of awareness thrumming through his entire body.

She must have sensed it too, for her muscles tensed and the tiny pulse point just above the ruffle of her neckline began to quicken.

“Unlike many men, I don’t have the gift of making myself pleasing to ladies.” His voice sounded a little rough, which only proved his point. “My tongue is unable to put a silvery shine on my words. But that said, Miss Caro, yes, I do consider us friends.”

Their gazes locked, and for a long, drawn-out moment, she seemed to be searching to see something.

God only knew what. Whatever the mysterious quality was, it must be lacking, or else…

No, he had vowed not to think of the past.

“Your words don’t need artificial glitter and gleam, sir,” said Caro softly. “Not every lady wishes to hear conversation so highly polished that all hint of individuality has been rubbed off it.”

Alec hardly dared breath. The breeze had stirred her scent and its softly sweet spice was making him feel a little woozy.

“Well, if you are looking for roughness,” he rasped, “You have certainly found it.”

She touched a fingertip to his jaw and traced a line to the tip of his chin. “Rough and smooth,” she murmured. “You are a man of very interesting textures, Lord Strathcona.”

At that, he flashed a rueful smile. “I would have thought you would choose a very different sort of adjective. ‘Prickly’ or ‘bristly’ are the first that come to mind.”

Her laugh–a sound that defied description–was almost lost in the ruffling of the emerald green needles.

“You forgot ‘thorny.’ Anyone who tries to touch you risks getting badly scratched.” Her hand, however, remained hovering in the air, keeping them physically joined.

By some strange alchemy, the current between them suddenly seemed to draw him closer.

Her lips parted ever so slightly and he was lost.