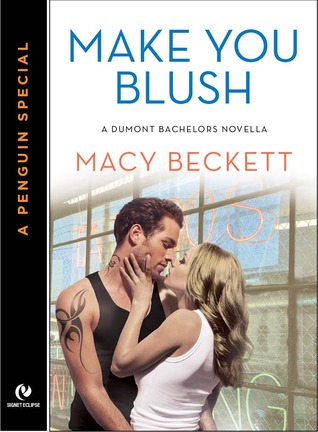 On the surface, Joy McMasterson has everything—a steady career, a trendy French Quarter townhouse, and high-society parents who fill her schedule with a rotation of trust fund hotties. But despite her good fortune, Joy is suffocating beneath the pressure of her father’s political campaign. Every detail of her life is scripted, from her sensible Tiffany hoops to the men she’s permitted to date.

To assert control over her love life, Joy visits The Sweet Spot bakery—home to Allie Mauvais, third-generation voodoo priestess and renowned matchmaker. Armed with love potion and a newly-found nerve, Joy walks out of the bakery and into Ryan Gibson’s tattoo shop. One look at the gorgeous owner and she knows two things: they have enough chemistry to steam the ink off his skin, and he’s not the kind of guy she can take home to her parents. But if Joy wants to escape her father’s shadow, maybe Ryan is exactly who she needs.

This is a novella which takes place before Book #1, Make you Mine. Although it is not necessary to read this first, Joy and Ryan do make an appearance in Book #1.

Joy’s father is running for the Senate, so he is all about image. He keeps pimping Joy go out on dinner dates with the single sons of his biggest donors. After speaking to Allie Mauvais and getting her voodoo gris-gris, Joy goes across the street to get a piercing. Although she is concerned with what her mother and father say, instead of getting a belly button ring or something else she can keep discreet, she picks a double eyebrow ring.

Ryan believes the sophisticated beauty is out of his league but he decides to ask Joy out anyway. All Ryan’s visible tattoos are complete;y opposite of all the men her parent’s make her date. I liked that Ryan took things slowly between them since he recognized that Joy was shying away just a bit. It is almost unheard of anymore for the H/H to go on several dates before they take the attraction to sex. Ryan earns a ton of points in my book for being thoughtful. There is a great deal of chemistry between the two, but eventually, you feel bad for Ryan. He is falling for Joy and she for him, but she is still way too concerned about keeping the status quo for her parents. She is keeping Ryan hidden, like a dirty little secret. I like when he finally confronts her it is with “I’m not a criminal.”

Ryan and Joy in private are adorable, but other than that you want to shake Joy for treating Ryan like his tattoos make him unacceptable. It takes a lot of courage for Joy to put herself before her father’s wants, but in the end, he doesn’t give her a choice when his ambition outweighs his concern for her.

This was an enjoyable story, but not imperative for the overall series and $2.99 seems a bit much for a 70 page story, but maybe I am just getting too used to $.99 book specials.

Ryan was beginning to worry that his constant clock-watching had caused time to go in reverse. There was no other explanation for how slowly the day had passed. He tried to stay busy, but after two of his appointments cancelled, he was left with nothing to do but imagine Joy’s sweet face reflected in every room of the shop–in the entryway where they’d shared cupcakes; even on the wall, where a framed pin-up girl grinned provocatively down at him.

Just when he’d managed to get Joy out of his head for five minutes, one of Judge McMasterson’s campaign ads had come on the TV in the break room.

The public Joy–linked arm-in-arm with her parents, their smiles wide and wooden, their eyes devoid of emotion–bore little resemblance to the vibrant girl he’d taken to dinner last night. The private Joy was the one who had his heart pinging. She let down her walls, spoke her mind, and snorted when she laughed too hard.

Ryan recalled how she’d looked with tears leaking down her beet-red cheeks, and he caught himself smiling. She’d even sent back her wine for him–a gesture that was unnecessary, but said a lot about her character. Most of the women he’d dated could drink a naval fleet under the table, and none of them had refused a drink in his company.

But as he was quickly learning, Joy wasn’t just anyone.

Walking her home and leaving with nothing more than a gentlemanly kiss on the hand had cost him a good night’s sleep. He’d heard the unspoken invitation in her voice, enticing him to come inside and fulfill her pretzel-twisting fantasy. But he’d also detected a note of uncertainty, that Joy’s heart wasn’t ready, even if her body was. Sexual frustration aside, his instincts told him to take it slow. A relationship was building between them, and he wanted to protect it.

One thing was certain: when they made love, it would be worth the wait.

One response to “Make you Blush by Macy Beckett”