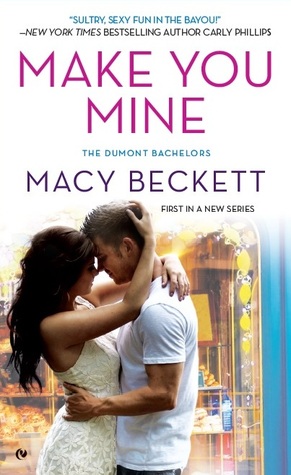 ORDER A COPY: Make You Mine: The Dumont Bachelors

For ninety-nine years, every man in the Dumont family has remained a perpetual bachelor. Residents of Cedar Bayou, Louisiana, whisper about a voodoo hex cast upon the family, sabotaging each man’s chance at marriage. In truth, the Dumont men have their own player personalities to blame, and Marc is no exception. As captain of his family’s riverboat, he’s broken hearts up and down the Mississippi. That is, until his high school crush strolls onboard…

Allie Mauvais rocks the boat when she fills in as pastry chef. She hasn’t seen Marc since senior year, when rumors flew that her great-great-grandmother was the one who cursed the Dumonts. After two weeks on the water, neither can deny the attraction that still burns between them. But to truly reach Marc’s heart, Allie must show him that the hex isn’t real, and it’ll take more than her mouthwatering sweets to prove it. Will Allie’s love be enough to finally make Marc hers?

It was Allie Mauvais’s grandmother who first cursed the Dumont men so they would never be able to find love and commit to one woman. Marc’s father is the perfect example of this powerful curse. He has five children with four different women and now another one on the way with his new girlfriend.

Marc tried never to cross paths with Allie, even going as far as changing to the other side of the street when he sees her. She might be beautiful to look at, but he is smart enough to be afraid of Cedar Bayou’s own Voodoo Queen. Everyone knows that every lonely heart stops by the Sweet Spot to pick up Allie’s delicious pastries as well as a gris-gris for love.

Marc has just inherited his family’s riverboat, and as the new captain, he has enlisted all his step-brothers and step-sister and even his Pawpaw to help out as the crew on his first excursion. He has even hired the famous and temperamental Phil Regale to be the chef for the two weeks cruise. Everything is all going according to plan until his pastry chef calls in sick, and the agency sends a last minute replacement, Allie Mauvais.

When odd things start happening, his crew starts to point toward Allie, but the more she is attacked, the more Marc appreciates how she rises above the accusations and is the first to make suggestions and offer a helping hand.

Once he stops thinking about voodoo and curses, he starts to feel the pull between himself and Allie. Except every time he acts on the attraction, something else goes wrong. Can they finally break the Mauvais’s curse on the Dumont men and find a happily ever after or is bad mojo just to powerful to let love grow?

THOUGHTS:
I really liked all the characters introduced in this new series. Allie and her big sister, Shannon, are delightful and Marc’s dysfunctional family has pulled together and created their own strong family bond even though their shared father can’t commit to anyone, including his children. There are several background stories, including the next one which involves Allie’s sister Shannon and Marc’s brother Beau who have a history of their own which didn’t not end well between them, but both are still pining for the other. I will be reading Make You Remember when it comes out.

The only thing that disappointed me was that Allie herself doesn’t believe in the family’s voodoo magic. It isn’t just that she doesn’t use it (although it seems to be hinted that she has powerful magic), but she doesn’t believe at all that her family has any powers. It seemed like a let down. I liked that for the most part, Allie used psychology to figure out what people were looking for, but again, disappointed that she didn’t believe in the magic.

He flapped a hand and poured her another shot, waiting until she downed that one, too. “I’m all keyed up. I need to unwind first.”

At least they agreed on one thing. Marc needed to blow off some steam, and Allie was happy to help—they were even in the perfect place for it. “Then let’s play a game.”

Marc glanced over her shoulder to the rows of dormant slot machines and empty roulette tables in the darkness. He pressed his lips together as if weighing her suggestion and finding it intriguing. “What’d you have in mind?”

He nodded in agreement. “Especially the Texas variety.”

Which left blackjack, but then they’d have to take turns representing the house, which didn’t sound like much fun.

“I don’t know a lot of cards games,” Allie admitted. “We could play Go Fish.” She’d meant it as a joke, but Marc’s lips tugged in a wide smile that drew out the cleft in his chin. He seemed to take it seriously for a moment, then laughed in a low, masculine chortle that turned her thoughts from gaming to sinning.

“Haven’t played that in a while,” he said, nudging another tequila shooter in her direction. “What should we wager?”

In general, Allie didn’t carry much cash, and what little she had was in her suite. “I don’t have any money on me.”

She glanced around the bar for ideas, then pointed at a bowl of salty snacks. “We could play for pretzels.”

“Pretzels?” He scoffed in offense. “What are we, twelve?”

Allie scowled at him. “Well, what do you want?”

His gaze took a slow trip down the length of her body, from shoulders to toes and back up again. Her skin heated as she began to understand the stakes he had in mind. “I wouldn’t object to seeing what you’ve got on under those clothes.”

Reflexively, Allie darted a glance at the strong contours of Marc’s chest, barely visible as shadows beneath his white dress shirt. Truthfully, she wouldn’t mind seeing what he was hiding either. “Are you suggesting we play Strip Go Fish?”

He answered by toasting her with his Coke and eyeing her shot in a silent message to drink up.

“Right here in the casino?” she added.

“The door’s locked, and the cleaning crew isn’t scheduled to come around till third shift.” He nodded to a dark corner on the opposite side of the room. “We can sit back there if you want. That way nobody will spot your bare naked backside through the glass doors.”

Allie pointed at him. “I think you mean your bare naked backside.” Which she was going to enjoy ogling–immensely.

“I will have another, but only to prove I can still trounce you half-drunk.”

She tossed it back, then slid off her bar stool, feeling warm and floaty as she led the way to a round table in the corner. Marc found one of those battery-operated candles that mimicked a flame’s flickering glow and set it on the table, so he could “see what he was winning.” They continued their Go Fish trash talking until they’d found a pack of cards and settled in their chairs.

“Wait,” Allie said while Marc shuffled the deck. “First we should make sure we’re starting out with the same number of clothes.” She counted her polo shirt, bra, skirt, panties, and clogs. “I’ve got five.”

“Are we counting socks and shoes as one item?”

She shook her head. “Separate.”

He quickly remedied the injustice by unbuttoning his dress shirt and pulling his arms free. Beneath it, he wore a white T-shirt that fit him like a second skin, stretched unmercifully tight across his broad shoulders. Even in the dim light, his bunching chest drew Allie’s eye and watering her mouth.

She swallowed hard. “That’s better.” So much better.

Marc caught her staring and faked a stretch to show off the inside curves of his biceps, then turned it up a notch, flexing them so they strained the hem of his T-shirt sleeves. A hint of dark ink peeked at her from beneath the fabric.

Oh, heavens. Allie loved a good tattoo, especially on a properly muscled body. She wanted to see all of it…and hunt for more.

“You’re not distracted, are you?” he asked with a smirk.

“Not one bit,” she lied. “Prepare to lose your other shirt, Captain.”

One response to “Make You Mine by Macy Beckett”