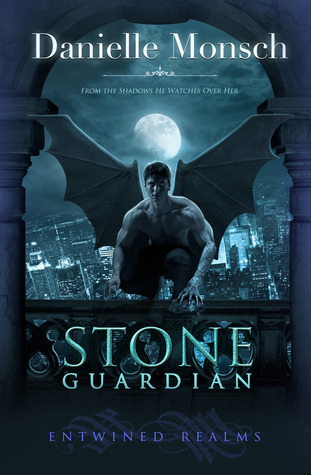 A big THANK YOU to author, Danielle Monsch, for today’s giveaway. She is giving away a digital copy of her first book in the Entwined Realms series, The Stone Guardian. I just love that cover!

She has a few novellas out on the series as well to enjoy after you read The Stone Guadian and before you read Book 2, The Dream Crafter which should be out at the end of the month.

This is a wonderful paranormal romance/urban fantasy series. I just love the world building here and the characters we have already been introduced to in this series. In case I haven’t mentioned it enough, if paranormal is your drug of choice, grab a copy of The Stone Guardian and get started on this series. You’ll finish just in time for the release of The Dream Crafter. 🙂

Gryphons flying past skyscrapers? Wizards battling it out in coffeehouses? Women riding motorcycles with large swords strapped to their backs? All normal sights since the Great Collision happened twenty-six years ago.

Well, not normal for everyone. Larissa Miller may have been born after the Great Collision, but as a history teacher who lives in the human-only city, she has never come into contact with any other race or species, nor has she wanted to. Her life is as ordinary as it gets – that is, until one day she walks out of her apartment and is attacked by a mob of Zombies, only to be saved by a Gargoyle.

Gargoyles trust no one outside their Clan, but due to a cryptic prophecy, Terak, Leader of the Gargoyles, has been watching over the human woman for months. While he can find no reason why the woman has been singled out, something about her stirs every protective instinct within him. When the attack confirms that the threats against her exist and are real, he convinces Larissa that though their races have never been allies, the best chance of discovering why she has been brought into his world is by working together.

In the course of their investigation Terak becomes entranced by his little human. But when he discovers why Necromancers want her and the great reward that awaits him if he betrays her, he must choose between the welfare of his Clan and not only Larissa’s life, but the fate of this New Realm as well. 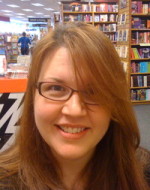 Born to the pothole ridden streets of Pittsburgh, PA, USA Today Bestselling author Danielle Monsch started writing in a time long ago, a time when there were not enough vampire stories to read and she had to write her own to fill the void. Yes, such a time of darkness did indeed exist.

Danielle writes stories full of fantastical goodness and plenty of action, but always with lots of romance (and a bit of woo-hoo!) mixed in. Vampires and Werewolves and Demons and Angels, Sword & Sorcery, Fairy Tales, Updated Mythologies and the like – if it’s out of the ordinary, it’s fair game for her stories.

When not writing, Danielle reads comic books and watches cartoons (though she says she reads manga and watches anime, because saying it in a different language makes all the difference.) She listens to music, plays D&D, follows XKCD, watches movies with the Rifftrax on, and is mom to two amazing little girls and wife to her favorite guy in the world.

11 responses to “Blogiversary Giveaway – The Stone Guardian by Danielle Monsch”