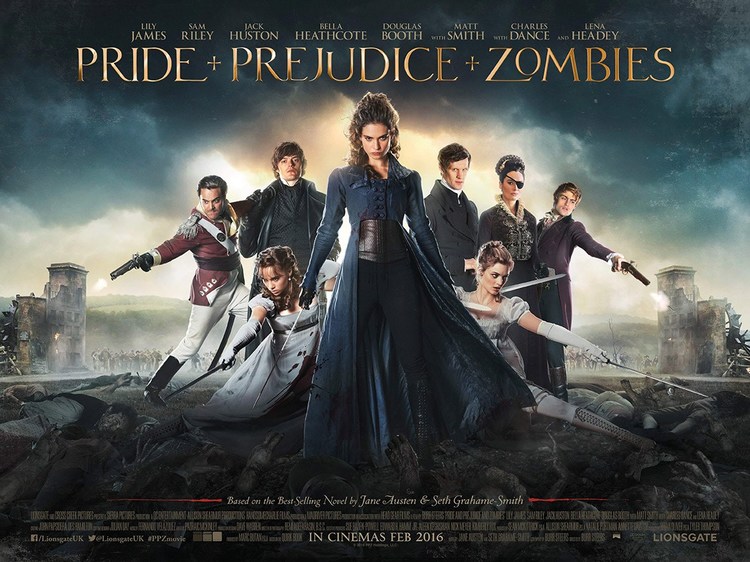 [box style=”rounded” border=”full”]Stunning, exciting and slightly gross but definitely enjoyable. I read Pride and Prejudice and Zombies when it first came out and I wasn’t impressed but even at that time I kept thinking it would do much better visually and I was excited about the immediate rumors that it would be made into a movie.[/box]

In 2009, Pride and Prejudice and Zombies was released as part a literary revamping to classic novels, whether they were adding monsters or erotica, it seemed everyone wanted to twist their favorite classic.

P&P is one of my favorite classic novels and so I grabbed a copy of this book when it came out. I was not impressed since I didn’t feel it changed enough of the story and doing things like changing “she was an accomplished piano player” to “accomplished zombie killer” just didn’t seem enough. But even as I read it, I kept thinking that it would be much better in a movie since the fight scenes would be more exciting to watch than to just read.

The costumes and sets were as stunning as any good regency picture would be and the zombies were quite disgustingly made up and were written in to give more than a few scares. The fight scenes and zombie attacks kept the action up and exciting.

Another way to keep the class distinction going during this zombie apocalypse was that the rich upper classes trained in fighting in Japan and the poorer aristocrats, such as the Bennett sisters, trained in China. Of course, we ignore how long it would have taken to get to the orient during the time of Regency England as well as how long the aristocrats would have been absent so they could all train under masters to become so deadly. That’s just one of those tedious plot points that you need to overlook.

I enjoyed not only the look of the movie but being such a P&P fan, I liked picking out all of the lines from the novel which were still interspersed with the new dialog.

I thought I would just sneak off to a matinee over the weekend by myself  but I decided to toss out that I was going to go see it during dinner Friday night and imagine my surprise when my teenager wanted to come with me. I was so excited, and I didn’t want her to change her mind, we went to the Saturday matinee. We both loved it and want to see it again.

Added to that, my daughter is a big Dr. Who fan and was excited to see Matt Smith as Mr. Collins. I had to keep telling her to that no one likes Mr. Collins although Mr. Collins wasn’t portrayed as annoying as he usually comes across in a P&P movie.

Time does dictate that some things were written out of the movie from the novel. We never see Darcy’s sister, Georgiana, and there was a subplot in the book that Elizabeth’s friend Charlotte is bitten but Elizabeth doesn’t say anything and allows her friend to marry Mr. Collins. Eventually, Charlotte gives in and eats Mr. Collins. That is all left out.

My favorite part of the whole movie is when Darcy attempts to propose to Elizabeth and not only does she refuse but when she declares that Mr. Darcy ruined her sister’s happiness, she emphasizes this by kicking Mr. Darcy across the room. While they debate their relevant feelings toward each other, they are sparring and using weapons. I feel this should be kept in as part of every Pride & Prejudice movie regardless of zombies. You know you always wanted to see Elizabeth deck Darcy for saying those things about her family. Admit it!  I tried to attach a link as my favorite scene but I couldn’t find it posted anywhere.

If you are a P&P fan, and are not grossed out by the zombies, this was definitely a fun and entertaining presentation of the classic. There were even several men in attendance looking for a good zombie/action flick so feel free to drag the husband or boyfriend.