We here at EBookObsessed are so excited to participate in Berkley Bookmas Special Event.  We were chosen to host author Elle Kennedy today who has given us a special extra scene from her Killer Instincts Series which concluded earlier this year! 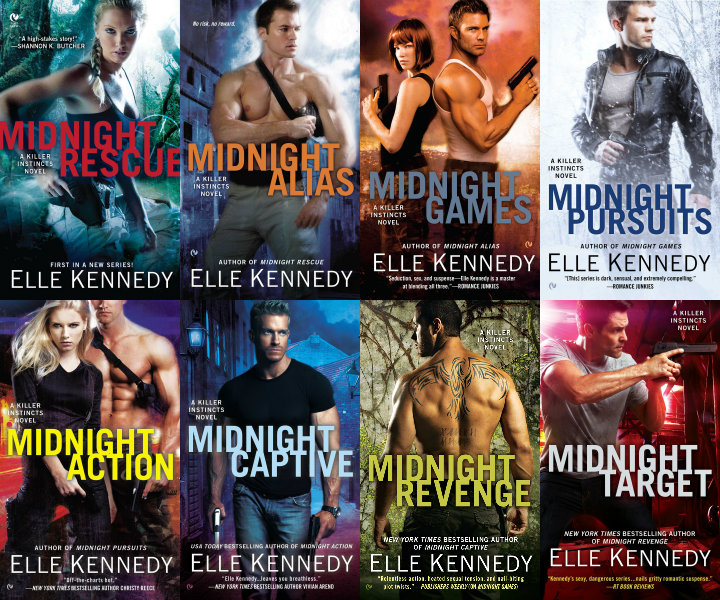 Berkley Bookmas is chock full of exclusive content from authors like exclusive excerpts, deleted scenes, author recipes and more! Check out the calendar of events below:

“She’s not going to make it,” Jim Morgan said gruffly.

Noelle wandered over to the floor-to-ceiling windows where her husband stood, brooding. His cobalt-blue eyes were fixed on the dusty courtyard of their Costa Rican compound. She followed his gaze, and her normally ice-cold heart warmed slightly. Not many things elicited an emotional response from her, but seeing Ash out there with his one-year-old son got to her. Even she had to admit that the little boy was fucking adorable. He teetered around on two wobbly legs, while his dad chased after him to make sure he didn’t face-plant into the dirt.

Jim glanced over with a dry look. “Don’t bullshit me, sweetheart. We both know it ain’t happening.”

She swallowed a sigh. No, she didn’t think so, either. Their daughter had been on assignment in Africa when all hell broke loose—a rebel group decided to make their move, martial law had been called, and all aircrafts grounded. Now Cate was stuck on another continent, more than a day’s worth of travel away. They hadn’t heard from her in almost twenty-four hours, which told Noelle that all the cell towers were down thanks to the chaos over there.

“No shit. Missing her kid’s first Christmas?” Jim shuddered. “Jesus fuck, I’m not looking forward to her mood when she finally gets in.”

Yeah, neither was Noelle. Cate was a hothead on a good day, but when her only child was involved? She went all mama lioness on the world. She was undoubtedly crushed that she couldn’t be here with him right now, and furious enough to set all of Africa on fire.

“Those rebels ought to be shaking in their boots,” Noelle said with a grin. “Cate can’t be happy with them right now.”

Jim’s answering grin was wry. “I don’t think anyone over there is happy with them right now. But, yeah, you’re absolutely right. She’s probably plotting all their grisly murders while she sits in the airport.”

A shriek of laughter sounded from the bowels of the huge hacienda-style house, making Noelle’s shoulders tighten. One of the million children spending the week here, obviously. And children were goddamn loud.

It was a total madhouse and she fucking hated it. Only Abby, Kane and their seven-year-old son J.J. lived on the compound year-round, and Noelle didn’t mind the little family. Plus, J.J. had inherited his mother’s badassness and was learning martial arts, so Noelle got to spar with him in the compound’s basement gym. Everyone else? She liked a helluva lot more when they weren’t in her face twenty-four-seven.

She’d barely had a moment’s peace since everyone arrived.

D and Sofia had shown up last night carting their four kids. Four.

Isabelle and Trevor got in the night before, bringing along their two daughters.

Liam and Sully showed up this morning—kidless, thank God. Ditto for Ethan and Juliet. Those two couples were the only ones not on Noelle’s shit list at the moment.

Luke and Olivia had brought their colicky son. Assholes.

And don’t get her started on Bailey. Her favorite chameleon, a woman capable of transforming into a completely different person at the drop of a hat, was pregnant again. Bailey and Sean already had two kids. Why did they need a third?

Noelle just prayed that the baby fever amongst Morgan’s mercenaries and her chameleon assassins wasn’t contagious.

“There are too many kids in this house,” she told her husband, moving closer to rest her frazzled forehead on his shoulder.

Chuckling, he put his arm around her and pressed his lips to the top of her head. “It’s fucking brutal,” he agreed. “Makes me want shoot something.”

Her heart skipped a beat, because Jim’s bloodlust always got her all warm and gooey. He was a crazy bastard, but she was a crazy bitch, so really, a match made in heaven. And despite being married for so many years, the often-violent passion between them had yet to fade. She didn’t think it ever would.

“Can we?” she begged, tilting her head to peer up at his handsome face. “I haven’t fired a gun all week. Or used a knife. You want to go downstairs and have a knife fight?”

Noelle laughed and brushed a kiss over his sexy mouth. “I was joking.”

Jim’s tongue slid through her parted lips to toy with hers, sending a shiver up her spine. When he kissed her this lazily, it usually meant he was contemplating something very naughty.

“Why don’t we forget the knives and just fuck instead?” His breath tickled her lips.

She groaned softly. “We have guests.”

“They’re all playing with their new toys—nobody’ll notice if we disappear for a couple hours.” His hot mouth traveled to the side of her neck, sucking gently on her feverish flesh.

Noelle gave another groan. “Screw it,” she murmured, reaching between their bodies to cup his hardening cock. “Let’s go.”

His eyes were on fire as he lifted her into his arms and marched toward the arched doorway. He was a man on a mission, and the mission was her. Noelle loved it.

But they’d barely reached the foot of the staircase in the massive foyer when a familiar noise had Jim halting in his tracks.

Noelle froze at the same time, then hopped out of his arms and landed deftly on her feet. Jim was already yanking his cell phone from his pocket and hitting a button.

“Don,” he barked to their security guy. “Who the fuck is that?”

Noelle heard the tinny reply—“No idea”—and then rushed out the front door.

In the courtyard, Ash had scooped Boone into his protective arms. But he didn’t look overly concerned when his gaze met Noelle’s.

“Military chopper,” he called over the din.

She glanced up in time to see the underside of the military bird as it flew over the roof in the direction of the helipad on the far end of the property. “Nobody requested clearance,” she called back.

Ash just grinned, and, carrying his son, hurried toward one of the Jeeps parked in the courtyard. Noelle raced after him and tossed herself in the passenger side. Ash promptly handed Boone over, and the little boy instantly threw his arms around her neck.

She winced. Oh sweet baby Jesus. It still jarred her to hear the kid call her Grandma. She was too young to be a fucking grandmother. But her husband was the boy’s grandfather, which made her his…ugh…grandma.

“Don’t get your hopes up,” she warned as Ash sped down the path running along the side of the house.

As they flew along the dirt road, another Jeep joined them in the rearview mirror. Jim, and he was alone, which meant he either shared the same suspicion as Ash or he’d received actual confirmation of it. If he sensed a threat, he would’ve brought backup.

The bird was landing when the two vehicles skidded to a stop. Ash dove out of the driver’s seat. Noelle carefully propped Boone on her hip and got out of the Jeep. The wind from the rotors sent her blonde hair flying in all directions. She tried to keep it in check with her free hand.

As Ash ran toward the Chinook helicopter, Jim brought his mouth close to Noelle’s ear. “That’s not an American bird. RAF.”

She nodded, having noticed the same thing. “She must’ve called in some pretty huge favors,” she remarked. “I’m talking three or four different governments’ worth of favors.”

At the helipad, the Chinook’s door creaked open.

And then there she was, her dirty-blonde hair arranged in a messy side braid. Her clothes were wrinkled and dirty. Her features were haggard. But her blue eyes, the same shade as her father’s, were wholly alert.

Cate barely had a second to blink before she was in Ash’s arms. Noelle watched in amusement, all the while trying to restrain the ecstatic child wiggling in her grip.

She shifted Boone to her other hip, grasped Jim’s hand, and then the three of them went to welcome Cate home for the holidays.

Plus enter to win a $100 Visa Gift Card and a recent release from each of this year’s Berkley Booksmas’s participating authors.

For tomorrow’s fun, head to one of the following blogs: