Guest Post: Spend a Morning with Dane Madden, The Hero of TUMBLE
I looked in the mirror this morning to shave. As I lifted the razor to my cheek, I saw a little scar that sits just to the side of my right eye. It’s not something most people would ever notice. Hell, I don’t notice it every day. But the light caught it just right and suddenly it was all I could see. I’m Dane Madden, the carpenter, not Dane Madden the philosopher, so why I stood there for a good five minutes remembering the night I got that scar is beyond me. But I did. I thought about how the barbed wire caught my skin and ripped the flesh and how Neely Kimber’s face filled with so much concern I was kind of glad I was bleeding.
She and I were inseparable back then. From the moment she opened the door and our eyes locked, there was a bond between us that grew stronger. We went from finding ways to bump into each other, to hanging out with a group of friends, to dating in the sincerest way. She wasn’t just a girl. Neely wasn’t a pretty face I wanted on my arm, or in my bed as things evolved, like many of the guys I knew back then labeled their girlfriends. She was more than that to me—my best friend. My confidant when things with Dad went sour. My trusty right hand that bailed my ass out of more trouble than I was worth.
The night my eye was cut, she remembered to go back and get my hat so it wouldn’t be found the next day. Had she not done picked up the evidence, the farmer whose cows my friends and I had been trying to tip (terrible idea, if you’re wondering) would’ve been able to track the mess in his field to me and my friends. Dogwood Lane is a small town. Word gets around easy enough without trying.
Then there was the night my brother Matt, our friend Penn, and I went corning around Halloween. That’s another terrible idea, if you’re wondering, and involves throwing shucked corn at cars passing by. Let’s just say a certain driver in an oversized pick-up truck didn’t appreciate the sentiment. After being chased on foot to the outskirts of town, we had to hide in a chicken coop until Neely could come get us.
Despite my antics, she was there. She might’ve laughed at me or pointed out how stupid we were, but she took my worst right along with my best.
Our lives were entwined by shenanigans, stories, and so much love. Damn, I loved her. I didn’t know where she stopped and I started. I didn’t want to know. She was the best thing in my life. She made me better.  And that was the ruination of us because I couldn’t bear to think I would make her life worse.
Seeing her again after all these years lit a fire inside me that I didn’t think was possible. I haven’t felt this burn since the day I walked off her porch having broken her heart. I want to talk to her, touch her, hold her and I can’t do any of it. Even though so much of our lives were built together, our memories from the easiest time of our lives shared, we aren’t those people anymore. And it’s all my fault. 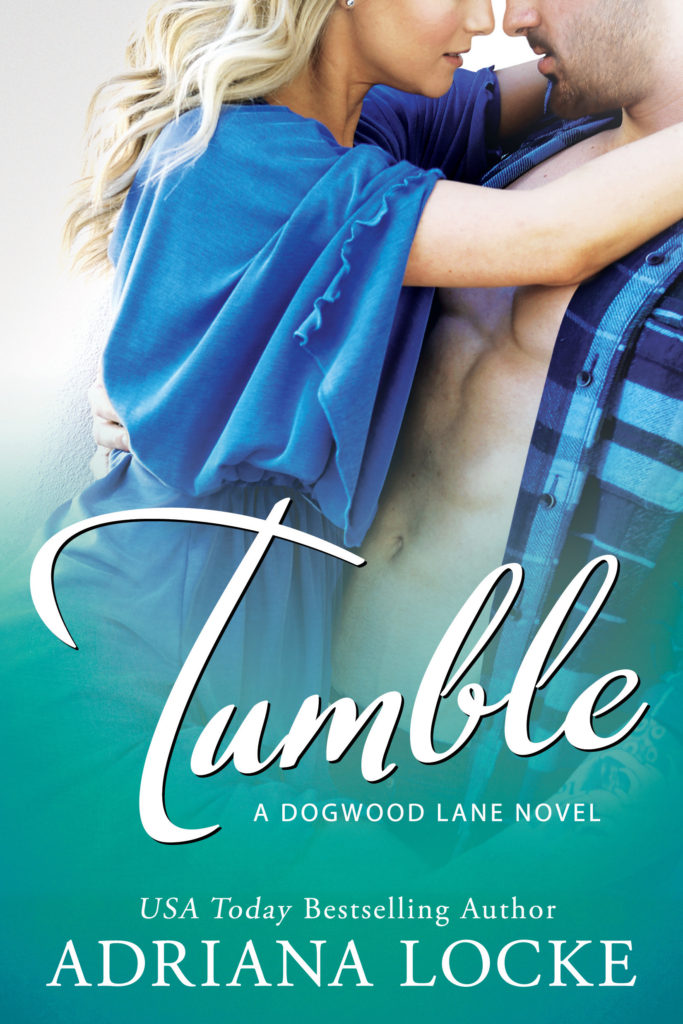 About the Book
Title: Tumble
Author: Adriana Locke
Release Date: February 26, 2019
Publisher: Montlake Romance
Summary
After being burned by her dream job in New York City, sports journalist Neely Kimber suddenly finds herself jobless and paying a long-overdue visit to her hometown in Tennessee. Her plan? Relax, reset, and head back up the corporate ladder. There’s just one unexpected step. Neely’s back in Dogwood Lane for barely a day when she sees the man she ran from nine years ago: the bad boy next door who was her first kiss, her first love, and her first heartbreak.

Devoted single dad Dane Madden knows he hurt Neely in the worst way. He’s got a lot to make up for. And as passionate as their reconnection is, it’s a lot to hope for. Having her back in his arms feels so right. But falling in love all over again with a woman who wants to live a world away is bound to go so wrong.

What’s it going to take for Neely to give him—and Dogwood Lane—just one more chance?

The sound of the hammer crushing my thumb—swung with more force than was necessary, to boot—ricochets across the front lawn. The tool falls from my hand, striking against the sawhorse, and flips into the soft grass with a gentle thud.

“Son of a…!” My hand shakes, the top of my thumb threatening to explode. I tilt my head to the sky and try to find some peace in the clouds.

He nods from halfway up the ladder leaned against the side of the house.

Wrapping my good hand around my thumb, I head toward my truck. Sounds of construction ring out behind me. It’s usually music to my ears, the lifeblood of the Madden name. But each cut of a sawblade, buzz of a power drill, and swing of a hammer feels like a distraction this morning. I have a throbbing thumb to show for it.

Beads of sweat cluster along my forehead. I remove my hat with my good hand and run the back of my forearm along my brow.

“Damn it.” Everything feels sticky. Mildly irritating. And the progress on the project that usually energizes me has failed me epically this morning. I just don’t want to be here. Not that I have a better place to be. Quite frankly, I have a lot of places I shouldn’t be, and with Neely, or thinking about Neely, is one of them.

I would’ve recognized her anywhere. Same gray eyes that glimmer like she’s about to tell you a secret. Full lips that spread into a smile so infectious you can’t help but feel your own mouth following suit. The hint of floral perfume, the golden hair that may as well be silk, and the aura about her that’s just as strong as the day she left Dogwood Lane and me—it’s all the same. It’s like time forgot to age her. She somehow has become more beautiful, sexier, stronger.

The world hates me. I’ve postulated this for a long time, but it’s obvious today.

The tailgate of my truck lowers. Scooping a handful of ice from the cooler in the bed into a bandanna, I wrap it around my injured digit. The relief lasts only a few moments.

“What are you doing down here?” Penn rests his forearms over the side of the truck, the tattoos carved in his skin like mini masterpieces on full display. He eyes my makeshift bandage. “What happened to you?”

“Hammer,” I groan, adjusting the ice.

“Never knew you to hit yourself with a hammer before. I find that interesting.”

“I have a hobby, thank you, and you should’ve seen her last night,” he says, smacking his lips together. “Lord Almighty, she’s a—”

The tip of my finger sticks out of the bandanna. It’s bright red and hot to the touch despite the ice packed around it. “All your escapades really sound the same at this point.”

“Is that jealousy I hear?” He cups his hand to his ear. “I thought so. Not my fault you’re in a dry spell.”

Leaning against the truck, I look at him. “Jealousy isn’t how I’d describe it. But if that makes ya feel good, go for it.”

“My hobby makes me feel good.” He moves his lips around, like he’s fighting the next words trying to pop out. He does this when he knows he shouldn’t say something but can’t quite convince himself not to. “From the looks of you, I’d say you’re more than jealous. I’d say you’re . . . tempted.”

My tongue presses on the roof of my mouth. “Tempted to what?”

“Word travels fast, huh?” I say, prodding around to see if my guess is right.

“That’s all you have to say about Neely being back in town? ‘Word travels fast.’ What’s wrong with you?”

We don’t have time for that conversation.

“I’d love to have been a fly on the wall for that little run-in.” Penn snickers. “Did you stutter around like I imagine? Or did you not manage to say an entire sentence?”

Working my jaw back and forth, I point a finger his way. “You better stop while you’re ahead.”

He reads me correctly, and his animation drops a notch. “Really, though. How’d it go? But before you answer that, let me toss out there that I heard sparks were flying all over the diner so hot Claire had to call the fire department.”

“Just telling you what I heard.”

“The firemen were there to order food, you idiot.”

He thinks he’s onto something. There’s a glee in his face that means only one thing: it’s going to be a long day around here.

“So, what happened?” he asks, resting his arms over the truck bed.

“You know, sometimes I think you should’ve been a girl with all the gossiping you do.”

“This isn’t gossip,” he contends. “This is Neely-freaking-Kimber, man. Every memory I have of my entire adolescence has her in it. She bailed me out of jail when I was too scared to call my dad and you and Matt were passed out on moonshine. Remember that?”

My chuckle is so hard, it causes my thumb to throb. “I forgot about that. She was pissed.”

“Neely came through, though. God, I miss her.”

Those last words echo through my mind.

I have shoved her out of my head for the last few years. Took over Dad’s business, took care of my business. Trudged forward without her because that was the only choice I had. I hardly even think about her anymore unless someone brings her up in conversation.

So why do I itch to crawl into the truck and hunt her down? 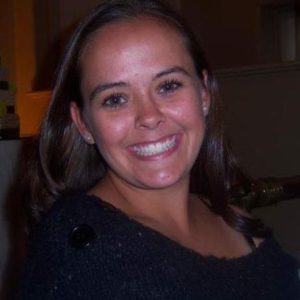 Author Biography
USA Today bestselling author Adriana Locke lives and breathes books. After years of slightly obsessive relationships with the flawed bad boys dreamed up by other authors, she decided to create her own. She is the author of Tumble, the first novel in her Dogwood Lane series; the Exception series; the Gibson Brothers series; and the Landry Family series.

She resides in the Midwest with her husband, her sons, two dogs, two cats, and a bird. She spends a large amount of time playing with her kids, drinking coffee, and cooking. You can find her outside if the weather’s nice, and there’s always a piece of candy in her pocket. Besides cinnamon gummy bears, boxing, and random quotes, her next favorite thing is chatting with readers. She’d love to hear from you! Look for her at www.adrianalocke.com.