A heart-pounding new series set in the Black Dagger Brotherhood world, with a scientist fighting to save the timber wolves—and getting caught in a deadly trap herself…

Lydia Susi is passionate about protecting wolves in their natural habitat. When a hotel chain develops a tract of land next to the preserve, Lydia is one of the most vocal opponents of the project—and becomes a target.

One night, a shadowy figure threatens Lydia’s life in the forest, and a new hire at the Wolf Study Project comes from out of nowhere to save her. Daniel Joseph is both mysterious, and someone she intrinsically wants to trust. But is he hiding something?

As the stakes get higher, and one of Lydia’s colleagues is murdered, she must decide how far she will go to protect the wolves. Then a shocking revelation about Daniel challenges Lydia’s reality in ways she could never have predicted. Some fates demand courage, others require even more, with no guarantees. Is she destined to have true love… or will a soul-shattering loss ruin her forever?

Lydia Susi’s Destiny came for her in the veil, on a random Thursday in the early spring.

As she ran along the wooded trail, two miles into a loop that would take her through the preserve’s northeastern acreage, she was measuring the glowing line that topped the contours of the mountains. Soon, the stripe would expand to an aura, and after that, the sun would accept the handoff from the moon, and day would arrive.

Her grandfather had always told her there were two twilights, two gloamings, and if you wanted to find your past, you went into the pines in the evening as the sun went down. If you wanted your future to come to you, you went alone into the forest in the veil, during that sacred transition of night into morning. There, he’d told her, when the distinction between that which ruled the light and that which held domain over the dark was at its narrowest, when the moon and the sun reached for each other before the rotations of their orbits tore them asunder, there was when the mortal could brush up against the infinite and seek answers, direction, guidance.

Of course, that did not mean you got good news. Or what you wanted.

But life was not an à la carte buffet where you could choose everything that went on your plate—another words-of-wisdom from a man who had lived to be 101 years old still smoking a pipe and drinking a glass of sima after his dinner year round.

Lydia had never believed in his superstitions. She was a researcher, a scientist, and the kinds of things that her isoisa had gone on about did not fit in with that Ph.D. in biology she’d bought on layaway from the federal government and was still paying off.

So no, she was not out looking for any prognosti-cation from the universe this morning. She was get-ting her workout done before she headed into her office at the Wolf Study Project. With the way things had been going lately, she was going to blink and it would be seven at night. Short-staffed and under-funded, everything was a fight for resources at WSP, and by the time she locked things up every evening, she was exhausted. So Carpe Cardio was her motto and why she was out in this misty darkness—

Lydia let her stride peter to a halt.

Her breath pumped in clouds that captured and held the moonlight, and as a breeze came across the trail, her body did the same with the chill, grabbing it out of the air and bringing it in under her wind-breaker.

As she shivered, she looked behind herself. The trail she was on was the widest one in the preserve, a highway rather than a street, but she couldn’t see much into the trees. Pines crowded up close to the shoulders of the packed path, and the fog wafting through the craggy trunks and fluffy boughs obscured the forest even more.

In a quick calculation, she figured she was a good three miles from any other human, two miles from her car at the trailhead’s parking area, and a hundred yards from what had caught her attention.

There, up ahead, something was close to the ground, moving.

Fight or flight, Lydia, she thought. What’s it going to be.

She reached around to the small of her back. There were two cylinders mounted on the strap of her fanny pack, and she left the Mace where it was. Clicking on her flashlight and bringing it forward, she swung the beam in a wide arc—

The eyes flashed over on the left, a set of retinas flaring the light back at her as pinpoints. The stare was about three feet from the ground and the pupils were set close together, as predators’ were.

“I’m not going to bother you,” she said. But like the gray wolf spoke English?

The growl was soft. And then came the rustling. The animal was prowling toward her.

Lydia kept the beam down on the fallen pine needles as she, too, walked forward. Something was wrong with the wolf, its gait wobbly and uneven. Yet the spirit of the hunter remained undeterred—and she was identified as its target.

She was about twenty feet away when she got a sense of the fully mature male. He was filled out, at a healthy weight of about a hundred and thirty pounds, and his mottled white, gray, and brown fur was thick and lush, especially at the tail. But his head was hanging at a bad angle, and he was dragging his back paws as he continued to close the distance between them.

It was obvious when the wolf was going to collapse. Though his head remained forward, his body listed to the side, his will staying strong even as his rear legs, and then his forelegs, gave out.

He landed on the soft bed of pine needles on his side, and the struggle was immediate, useless paws batting at thin air and ground cover. As Lydia drew a little closer to him, he snarled, flashing long white fangs, his golden eyes narrowing.

Her hand shook as she got out her cell phone. As she called a number from her favorites, she tried to keep her breathing steady.

In the flashlight’s beam, she could see the grayness of those gums. The wolf was dying—and she knew why.

“God damn it, pick up, pick up—” Her words ma-chine gun’d from her mouth. “Rick? Wake up, I’ve got another one. On the main trail—what? Yes, it’s the same—enough with the talking, get your ass out of bed. I’m on the loop, about two miles into the—huh? Yes, bring everything, and hurry.”

She cut the connection as her voice gave out.

Letting herself fall back to a sit, she stared into those beautiful eyes and tried to project love, acceptance, gentleness . . . compassion. And something got through, the majestic male’s muzzle relaxing, its paws falling still, his flank rising and falling in a shuddering breath.

Or maybe it was dying right now.

“Help is coming,” she said hoarsely to the animal. 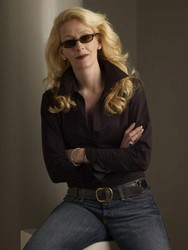 J.R. Ward is the author of more than thirty novels, including those in her #1New York Timesbestselling Black Dagger Brotherhood series. There are more than fifteen million copies of her novels in print worldwide, and they have been published in twenty-six different countries around the world. She lives in the South with her family.

Like this post? Share it with the rest of the world. --->
« Friday Giveaway: The People We Meet On Vacation by Emily Henry
Review: Claimed by J. R. Ward »