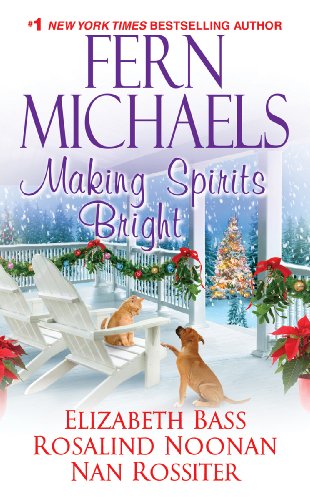 Secret wishes, sweet surprises, and gifts straight from the heart. Delight in this season’s most joyous presents with these four sparkling tales. . .

Melanie McLaughlin desperately wants to adopt two orphaned siblings and give them a real home for Christmas. A just-for-the-holiday marriage to Bryce Landry fits her plan perfectly. . .until unexpected sparks have Melanie dreaming of forever by his side. . .

A glass of wine, lounging in pajamas, and catching up on movies—that’s Heidi Bogue’s idea of a perfect Christmas. Until her thirteen-year-old niece makes a surprise visit—and a snowstorm turns Heidi’s café into a community refuge. Now one handsome cop is giving Heidi plenty more reasons to celebrate. . .

“Home For Christmas” by Rosalind Noonan

Jo Truman needs a replacement Santa for her gift shop’s Christmas Eve party. She’ll do whatever it takes to convince lonely soldier Sam Norwood that he’s perfect for the part…and that the season for love is always. . .

Maddie Carlson would do anything for her best friend. And helping Asa Coleman babysit a rambunctious puppy Christmas Eve night is her one chance to help the troubled teacher put his past to rest. . .and give the sweetest gift of all.

Making Spirits Bright by Fern Micheals. Melanie and Bryce had known each other as casual acquaintances. After seeing each other again at a Christmas party, they start dating and begin to fall in love. Melanie has just begun the paperwork to become an adoptive parent when she begins seeing Bryce so she doesn’t even mention it to him. She is told they can’t complete her paperwork until they meet her husband. She is devastated since she doesn’t have one. When two young siblings need an emergency foster home, Melanie and Bryce decide to get married and give them a home.

This started out as an enjoyable story, but it ended so quickly and abruptly that it was ruined for me. We were coasting along nicely, then in the last few pages we rushed through all the drama of the adoption agency, getting married and being together as a family. Now I might have gone with the quickie HEA ending if Bryce has harbored a crush on Melanie for years, but she wasn’t interested because she was a few years older than he was. I would go with idea that he jumped into marriage and a family with a woman he’s been secretly in love with for years. But not when they both indicated that they never gave the other much thought before. Bryce even wonders “Does she like coffee or tea?” and he’s jumping into a lifelong commitment to a woman and two children after 3 dates?

Runaway Christmas by Elizabeth Bass. This story was just too busy!! From the description, you think that instead of the quiet Christmas that she’s looking forward to, Heidi is just getting her niece as Christmas surprise, but there is a lot more to it than just the niece. Her landlady falls down the stairs and ends upon the hospital leaving Heidi to take care of her little yappy dog…and then the au pair of her upstairs neighbor, who is out of the country (no discussion of where the father is), leaves her toddler charge with Heidi when she has to return to France to see her sick father….and wait, isn’t this supposed to be a romance…oh, yeah, here is some mentions of the gorgeous and shy Officer Patrick who stops by to check up on Heidi now and then and he smiles at her.

When I say too busy, I mean it was really too busy. I was tired at the end of it myself. Oh, and I forgot to mention the blackout that takes out most of Brooklyn and leaves Heidi, the niece, the dog, and little kid, and half the neighborhood living at the coffee shop for Christmas.

If you want a good cop/diner owner/Christmas story, try A Vampire for Christmas’s All I want for Christmas by Alexis Morgan. That had a lot more romance and a lot less crazy.

Home for Christmas – Roaslind Noonan. Now this was a very heartwarming, romantic, Christmas story I was looking for. Jo Truman lost her finance and the father of her unborn baby to a tragic ski accident. His best friend, Sam Norwood, left town and joined the army after he realized he was falling for Jo. After he is hurt in the war, he returns home and those burning embers start to rekindle their attraction after five years apart. This was a lovely story and the type of story with a little romance that I have been looking for in this book.

Christmas on Cape Cod by Nan Rossiter. This was another nice story. The book jacket description made more of an issue with the dog than necessary. Kid gets dog on Christmas morning – that was the big dog part of the story and if it was left of the back cover, it would have been more of a surprise/point of interest. This was more of a simple story of a man, his son, and the man’s long time “just friends” friend going to have Christmas with his parents. It little more romance would have been nice

Favorite Scene is from Home for Christmas:

“You’ve given me some good ideas,” she said. He reminded her of the Sam she used to know, solid and dependable. “It seemed hopeless, but there are some alternatives.”

““And if anyone can rally people around here, it’s you. Who else could have sold a dozen personalized signs in one day?”

“She snorted. “That’s because I know everyone and their brother.”

“Exactly.” His hand moved down her thigh, squeezing just above her knee

His touch felt so good. Maybe he meant it as a brotherly show of encouragement, but Jo’s body was taking it seriously, her heart beating like a wild bird in her chest, a poignant want stirring depe within. Oh, to be in Sam’s arms, to be falling through darkness in sync with him…the fantasy was to palpable in this moment, she had to call him on it.

“You know, when you touch a girl like that, it gets her thinking.”

“Like this?” His hand moved up her thigh, straying dangerously close to the sweet spot, but circling around her hip pocket to squeeze her bottom.

No brotherly intention there. It was definitely sexual, and the reality stirred hot embers of fear and excitement for Jo.

“Oh, now you’re really asking for it.” She turned to face him, hoping to read his expression.

The spark of passion in his eyes defied the shadows. “I’ve always been asking, Jo.”