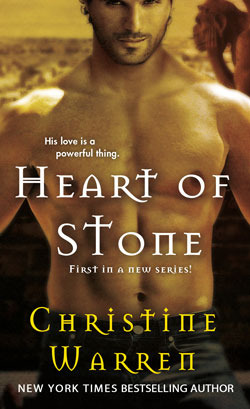 ORDER A COPY: Heart of Stone

Ella Harrow is trying to carve out a normal life for herself. Well, as normal as an art geek with psychic abilities can hope for. As museum docent and gift-shop manager, Ella is able to keep her distance from people—and her powers in check—while surrounding herself with the artifacts she loves. But how on earth is she supposed to act normal when a thousand-year-old statue on the museum’s terrace suddenly comes to life?

Not your ordinary gargoyle, Kees has been asleep for eons, waiting for a portent of evil to wake him from his slumber. Kees isn’t a vision; he’s a bat-winged guardian created to protect the world from the seven demons of the Dark. Somehow, Ella triggered his reawakening. Maybe the demons have been unleashed? Maybe his heart is finally ready to be chiseled open? The fate of the world isn’t carved in stone…yet.

Ella has been trying to hide the power the lives inside of her all her life. The power that spilled out of her when she was a child and destroyed her world. Although Ella wants to deny that it exists, there are those who feel the magic inside her and are drawn to it and if she won’t use that magic, they will take it from her.

When she is attacked one night in the garden of the museum where she works, at the feet of the large gargoyle statue, she is not sure what is scarier–the fact that she is being attacked or the fact that a giant gargoyle has come to her rescue.

Kees is surprised to be awoken by the little human. Guardians can only be awakened by their Warden, who is a member of the Guild, and only to fight the Darkness, not to help a human woman who is being mugged.

Now is it up to Kees and Ella to locate the rest of the Guardians and try to wake them without the magic of the Wardens, but with just the two of them against a notornis army, do they have any hope to win?

THOUGHTS:
Although this was an interesting story with a nice set up for future novels, I was quite distracted by the fact that the sleeping Guardian woke up way too familiar with the modern world even though he is over 1000 years old, he hasn’t fought the Darkness since the 1700’s and the last time he was awoken to meet his newest human Guardian was 65 years ago. Now this was addressed by saying the Guardians were in more like a coma like state where they were aware of the world around them but I still felt that hearing vague pieces of information from people wandering around a museum shouldn’t have a Guardian up to speed on a world that has significantly changed in 65 years. My mother-in-law hasn’t been asleep for the last 65 years but we still have a hard time explaining to her about apps on an Ipad.

As an example, Ella makes a Star Wars joke about turning to the dark side (it was clever), and Kees appears to understand it, although he has never watched a movie and a reference to joining the dark side should have confused him since they are fighting the Darkness.

Like any good fish out of water story, it should have taken some time for Kees to acclimate to his newly awakened environment.

This wasn’t the best Guardian story that I have ever read although it could have potential.

“I’m afraid I need to speak with Ms. Harrow alone,” the man said, straightening his shoulders and still falling at least three inches short of Kees’s imposing height. “You can wait out here.”

Baring his teeth in something close enough to a smile to lie about it, Kees dug in his heels. “I go where she goes.”

Not what Kees wanted to hear, but the intensity behind her words was hard to miss. He knew she was determined to keep him at arm’s length–she’d been attempting to do so since the moment he first moved from his pedestal (through at that point, he doubted her arms had been long enough to suit her)–but he disliked that idea. He couldn’t protect his human if she wouldn’t let him stay with her, and somehow the compulsion to protect her was strong. Stronger than he’d ever experienced before.

Normally, humans as individuals meant little to him He had been summoned to protect the species as a whole, but it wasn’t his job to go around rescuing them one by one. He kept the demons at bay so that they could live their lives, however long or short those might be. He barely noticed that they differed from one another, let alone cared what happened to any one of them. How could he, when Guardians didn’t fall prey to the burden of human emotions?

Oh, Guardians experienced anger–rage against the demons gave them strength to their purpose–and certainly, he had experienced frustration at times during this long slumber or when a demon didn’t go into exile so quickly as he might like, but he’d never felt any of the more human emotions. He felt a brotherly bond with his fellow Guardians, but he didn’t suffer from fear or jealousy or possessiveness.

And he certainly didn’t consider himself capable of caring for a human. So what was it about Ella Harrow that made him react so differently than he had in the past? It was something he might have to ask Gregory about.

As soon as they found him.

Ella squeezed his arm tightly, and he scowled down at her.

“Fine.” The word sounded less than sincere, but he had led the other humans to believe he was Ella’s lover, so if they believe him to be irrationally jealous or possessive as well, so be it. It didn’t make it true. “I will wait for you. But if you have need of me, call out, and I will be by your side in an instant. Do you understand?”

She looked up at him with a combination of surprise and wariness in her gaze. It made the gray depth of her eyes darken like storm clouds.

She nodded. “I understand.”

A strange impulse grabbed Kees, and he found himself grasping her around the waist and tugging her against him. She had to crane her head to keep her eyes on his face, and he took advantage by swooping down and sealing his lips against hers.

She stiffened in his arms. Her hands went up to press against his chest, and he tightened his grip in warning. Let her think he feared the detective and the others seeing through their act. In reality, he simply wanted to savor the moment.

She felt soft and sweet against him, a sweetness that was mirrored in her taste, all warm sugar with a hint of spring violets. Her lips even felt like the petals of a delicate flower, and they bloomed open when he traced his tongue along the plump surface of the lower one. Diving in, Kees forgot all about their audience and continued kissing her for the simple pleasure of it.

He experienced a surge of desire that took him by surprise.

Desire? For a human? When he pulled back, she looked up at him through hazy eyes, her brows drawn together in confusion. He understood the feeling.

“Go answer your questions,” he murmured. “I’ll wait right here until you return.”

And maybe while she was gone, he’d be able to figure out just what the hell was going on, why she made him feel more like a man than like a monster.

Like this post? Share it with the rest of the world. --->
« Review: Vampire for Christmas by Felicity Heaton
The Expert’s Guide to Driving a Man Wild by Jessica Clare »