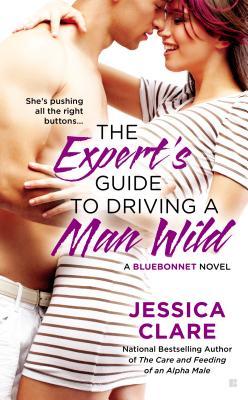 ORDER A COPY: The Expert’s Guide to Driving a Man Wild (A Bluebonnet Novel)

This is the third book in the Blue Bonnet Series. I absolutely loved it!

Brenna is a free-spirit with no ties to anything, she is loud and sarcastic. She is forgetful and doesn’t mind coming to work or going out in a pair of boxers and t-shirt. She is this beautiful challenging girl. The more Grant tries to tell her what to do and micromanage the more she antagonizes him. “How many rolls of foil do you think it’ll take to cover his desk?” She is a prankster and does things she knows will get a reaction out of him.

Grant is still mourning from the loss of his wife five years ago. And when his parents come into town and get on his back about dating, Brenna steps in and becomes protective of him. His mother throws single women at him and in a momentary lapse of judgment Brenna proclaims herself his girlfriend. She figures no one is allowed to bother him but her. After one date they end up in bed together where adventurous Brenna unleashes the wanton side of Grant.

I love that this book doesn’t sound like all the others. It’s beautifully written. It is original. I adore all the characters. I can’t wait for the next book to come out. I finished it in one sitting. OOOOhHHH boy the sex scenes in this book will drive you wild. 😉

She rolled her eyes and put her hands in the front of his shirt, then tugged hard enough to make the buttons pop off. “It can’t be because you’re a really good kisser and I want to get laid?”

Was that how most women thought? He had only known Heather, and while she’d been adventurous, it hadn’t been adventurous quite like this. Her adventurous spirit had been saved for mountain climbing and challenging sports…..and meeting other men in clubs. When they had first gotten married, their sex live had been pleasing, but tame. Still she was the only yard stick he had to judge by. “And you want to have sex with me?”

“No.” she said in a sarcastic voice. “I thought I’d rip your shirt off and then force you onto the bed and make you watch while I fingered myself.”

Even as she said the cutting words, her hands stroked under his loose shirt and over his chest, her gaze went there, as if fascinated.

She was still entirely too lippy. He grabbed her and hauled her against him, enjoying the widening of her eyes.

He groaned at the gentle touch of her hand. “God Brenna, Don’t–”

She pulled away as if scalded. “You okay?”

“Just…it’s been a while.” He looked down at the smooth, pale skin under him, highlighted by her delicate lacy underthings. “Let me be in the driver’s seat.”

She grinned and raised her arms up over her head, clasping her hands together. The motion made her breast high and firm, and almost popping out of her bra. “I’m all yours. Do what you will.”

He leaned in to kiss her again.

“Be gentle,” she said, fluttering her eyelashes. “It’s my first time…with you.”

“Are you every serious?”

“Rarely ever. Serious is no fun.”

Grant kissed her lightly, tasting her full lips, and he felt the tremble that moved through her body.

“I know.” She said when he raised his head again her eyes gleaming with excitement. She pulled his glasses off his face and tossed them aside. “We can play a game.”

“Game?” he murmured kissing along her jaw toward her ear.

“It’s called guess Brenna’s piercing. You can explore me until you find it.”

She had a piercing somewhere? His thoughts went wild, picturing that. Holy F***. God she was sexy. If he’d gotten one after reading the

Grant leaned in and nibbled on her bare earlobe, his cock growing harder with every passing moment. She kept making these breathy little gasps when his tongue touched her skin, and was driving him wild. “No earrings” he observed.

He leaned over her face again and lightly kissed an eyebrow. “No earring here.”

She pinched his arm “You knew that already.”

“Hush. You quit talking. This is my guessing game”.

He leaned down lightly and licked at her closed lips. “No piercing here.”

She shook her head, her eyes dancing. His fingers went to one of the tiny white shoulder straps for her bra. Very slowly, he listed it off the shoulder and skimmed on her arm, glancing over at Brenna to see her reaction. Her gaze was intense, riveted to his fingers on her skin, as if fascinated. As if nothing in the world existed.

He tugged the bra cup down on one side, exposing her nipple. Small, pink, tight. With one hand, he massaged the globe of her breast, and then tweaked the nipple between his fingers, rolling it back and forth.

“No piercing here, I should probably double check.” She was driving him mad with need, but he wanted to savor this, savor her.

“I should check the other breast in case,” and very slowly he repeated the action.

Her nipple was stiff and pointing, and when he slid down to take it in his mouth, her choked cry of response sent a bolt of lust rocketing through him. “No piercing here either.”

“You’re pretty good at this game,” she panted, then mewed as he bit lightly on her nipple. “Keep guessing.”

Grants eyes went to her bare belly button. No piercing there, but he had to taste it anyways.

“No piercing there either, huh? Maybe I was lying about the whole piercing thing.”

“MMM. I’ve still got plenty of ground to cover. Should we take these off?”

He was fascinated by her reveal. Her tattoos were exposed to him and he paused to examine each one closely.

His fingers stroked over her hip bones and then slid toward her apex, to the dark vee of her pussy. And he hesitated, because even though he was leading the exploration, he wanted her approval first.

“Don’t get shy on me now, Grant,” she said teasing. “We’ll never finish our game if you do.” She spread her legs for him an invitation, knees bent, and that sight would go down in Grant’s mind as one of the most mind blowing sexy moves he’d ever seen. He groaned, his cock jumping at the sight. He wanted to bury his face in her thighs and make her scream and come in the next moment, but he had to keep playing this tantalizing, maddening game. So he took his hand that was resting on her belly and lightly stroked his thumb down the wet slit of her pussy.

And his fingers touched something metallic and hard. He froze.

She made a low sound of pleasure, flexing her hips. “You’re pierced…here?”

“DING DING DING”, she said breathily. “Give that man a prize.”

He had to get a closer look. Grant parted her flesh with his fingers, staring down at her perfect pink pussy. Nestled below the dark curls, in the hood of her clit, was a vertical silver piercing with a tiny ball on the end.