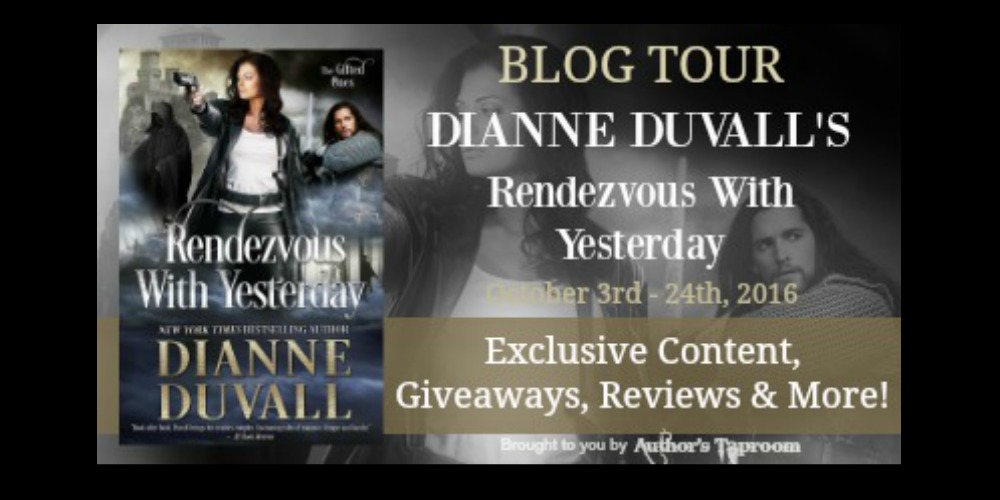 Hello! Thank you for joining us today. And thank you, Lucy, for letting me visit again and for helping me celebrate the upcoming release of RENDEZVOUS WITH YESTERDAY! It’s always a pleasure to be here.

Lucy has posed an interesting question for me today

What are some of the excitements and pitfalls of time jumping in a series?

If you’re unfamiliar with my work, I began my writing career as the author of the Immortal Guardians paranormal romance series, which takes place in the present. Most of the characters it features fall into one of four categories:

• gifted ones — men and women born with unusual talents and abilities (healing, telepathy, telekinesis, etc.) as a result of more complex DNA than that of ordinary humans.

• immortals — gifted ones who have been infected with a rare symbiotic virus that lends them incredible strength, speed and longevity coupled with an unfortunate photosensitivity and need for blood.

• vampires — ordinary human men and women who have been infected with the same rare symbiotic virus that infects immortals, but suffer brain damage and descend into madness because they lack the immortals’ advanced DNA.

While the Immortal Guardians series focuses primarily on the immortals, last year I launched a new series—The Gifted Ones—that is a prequel of sorts to the other and revolves around mortal gifted ones, particularly those of a different era. Thus far it includes a medieval romance (A SORCERESS OF HIS OWN) and a time travel romance (RENDEZVOUS WITH YESTERDAY). The bulk of both books takes place in England around the turn of the 13th century, so there is quite a time jump between the two series. And, as Lucy correctly guessed, I’m finding it very exciting.

Since my Immortal Guardians tend to be very long-lived, a few of them appear in The Gifted Ones series. (Don’t worry. You don’t have to read one series to understand the other. All of my books are written as stand-alone novels.) For me, this is one of the reasons time jumping with series is so much fun. I get to show readers how gifted ones lived so long ago and—at the same time—give Immortal Guardians fans glimpses of some of their favorite immortal characters in the past.

I’m even enjoying the vastly different setting in The Gifted Ones books. I thought the immense research required to write them would be on the tedious side. But I actually liked learning more about everything from the politics of 12th and 13th century England, to that period’s knowledge of science, to the social customs, dress, food, and medicine of the Middle Ages. And I found it particularly entertaining to let Bethany’s modern sense of humor shine through despite the social strictures.

As far as I can tell, the only pitfall involved in series time jumping is that some readers who enjoy one time period may not be interested in books that are set in the other. All readers, after all, have their favorite genres. I rarely stray from my own. But I think Robert and Bethany’s story—RENDEZVOUS WITH YESTERDAY—bridges the gap between historical and contemporary paranormal/fantasy romance well. They were such a fun couple to write. Robert is a powerful medieval warrior. Beth is a strong, independent woman. Both are brave and fiercely loyal to the ones they love. And both have a tendency to tease. I hope you’ll enjoy their banter and adventures as much as I enjoyed writing them. 🙂

We’re so excited to share with you the much-anticipated sequel to Dianne Duvall’s A Sorceress of His Own! Rendezvous with Yesterday is newest Gifted Ones novel (a prequel to the best-selling Immortal Guardians series) and is available October 17th, 2016 at all major e-retailers! Find out more about this fall must-read below!

Modern-day bounty hunter Bethany Bennett helps her brother track two fugitives to a forest outside of Houston, Texas. But what should have been a routine apprehension of two bail skippers spirals out of control and ends in violence. After Beth and her brother are both seriously injured, a mysterious figure suddenly looms over her. And, when the smoke clears, Beth finds herself not only in another place, but in another time.   As Lord Robert, Earl of Fosterly, attempts to identify and track down the nameless enemy who has been plaguing his lands and people with violence, the most peculiar woman stumbles into his path. Small, vulnerable, yet possessed of a bold, fiery spirit and wicked sense of humor, she persists in dubbing Robert and his men members of something called a medieval reenactment group . . . until she sees his castle and labels herself mad. It seems bounty hunter Bethany Bennett has come to him from the future, bringing with her laughter and chaos, swiftly winning the hearts of his people and inspiring within him a love he thought he would never experience again. But when Robert discovers a way for her to return to her time, will the love they share be enough to keep them together? 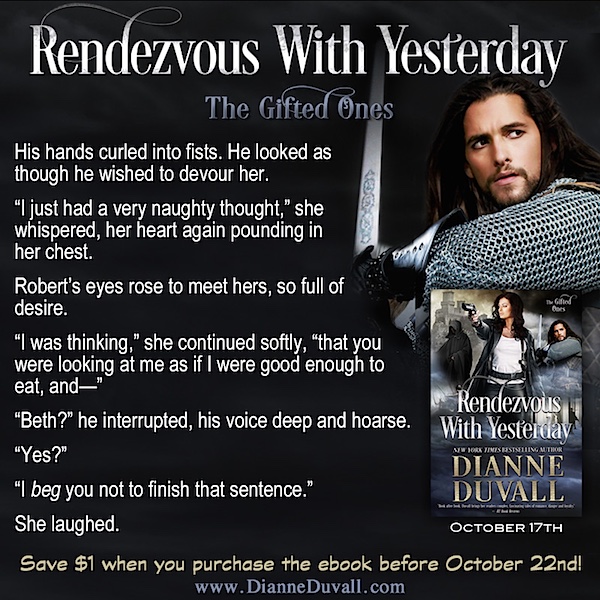 And don’t miss the book that started it all!

Dianne Duvall is the New York Times and USA Today Bestselling Author of the Immortal Guardians paranormal romance series and The Gifted Ones series. Her books have twice been nominated for the RT Reviewers’ Choice Award for Best Vampire Romance and are routinely deemed Top Picks by RT Book Reviews, The Romance Reviews, and/or Night Owl Reviews. Reviewers have called Dianne’s books “utterly addictive” (RT Book Reviews), “fast-paced and humorous” (Publishers Weekly), “extraordinary” (Long and Short Reviews), and “wonderfully imaginative” (The Romance Reviews).   Dianne loves all things creative. When she isn’t writing, Dianne is active in the independent film industry and has even appeared on-screen, crawling out of a moonlit grave and wielding a machete like some of the vampires she has created in her books.   For the latest news on upcoming releases, contests, and more, please visit www.DianneDuvall.com.  You can also find Dianne online . . . Blog | Facebook | Twitter | Tsū | YouTube | Pinterest | Goodreads | Google Plus

Brought to you by Author’s Taproom
https://authorstaproom.com/

Like this post? Share it with the rest of the world. --->
« Audiobook Review: Dead and Kicking by Lisa Emme
Review: Rendezvous with Yesterday by Dianne Duvall »