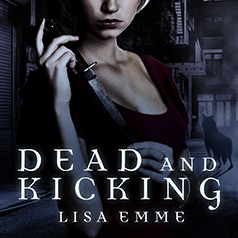 Dead and Kicking (The Harry Russo Diaries, #1) by Lisa Emme

[box style=”rounded” border=”full”]The premise of the story had potential and started out as an average Urban Fantasy with nothing overly exciting but still a potential to be a good series until the two main characters turned into complete idiots.[/box]

Angharad ‘Harry’ Russo is just your ordinary twenty-something, with one exception – she’s a witch with an out of the ordinary gift. When her blind date goes sideways and she ends up face to face with a dead body, her life starts to go sideways too.

Harry soon finds herself right in the middle of the mayhem, dealing with Cian Nash, a homicide detective that is as aggravating as he is sexy; the biggest, baddest vampire in town; and a parcel of pesky zombies that keep popping up everywhere. It’s all connected to her date’s unfortunate demise, or is there more to it than meets the eye?

Harry is a witch who can see the dead, and she lives with her two best friends, another witch and a wolf shifter, as well as the spirit of her grandmother who raised these girls but who passed seven years prior.

Her grandmother convinces her to go the local coffee shop to try and “accidentally” meet a handsome man her grandmother picked out for her. Harry meets him there but in spirit only since he was just murdered. He drags Harry to his murdered body and has her locate a flash drive hidden in his shoe. Harry calls in the murder and when the police arrive she meets Detective Cian Nash and there is an instant buzz between the two of them.

As they start the story, we get the impression that Harry is a witch with some decent powers and someone who is in the know with the paranormal world. So this should not be a “I just learned I am a supernatural and have no idea of the world I am part of” story. Oddly though, even though she lives with a wolf shifter, she doesn’t pick up on things like Cian sniffing the air, and sniffing her, nor does she get any buzz with her witch powers that he is paranormal. Turns out that Cian is an Alpha wolf with the local pack that Harry’s roommate belongs to. This is just the start of the idiot problems that suddenly come up.

Harry doesn’t tell Detective Nash that she has the flash drive and watches a video of a powerful necromancer who is killing people and jacking their bodies for some yet unknown reason. She takes this to the Magistrate of the area who is a very old and powerful vampire. Harry goes to his bondage club, dressed and ready to confront vampires (including a camouflage spell for her katana), and again, seems to know everything about protecting herself, but ends up being forced into a private date with the dangerous vampire and then she simply doesn’t appear to know just how dangerous and powerful he truly is, again idiot.

She knows that the vampires can’t get into her home but doesn’t take into account that the rich, powerful vampire who wants to get his hands on her can simply buy the building out from under you and walk right in because it is now his home.

The ghost grandmother also seems to have given Harry only so much important information, such as why she needs to be avoiding the dangerous vampire. Maybe when she was young you were protecting her, but since she has gotten old enough since her grandmother passed and is still hanging around, there might have been plenty of time for the “you’re ready to know” speech which would have let Harry know exactly why it was important to never come to his attention.

Harry isn’t the only one. Harry and her roommates are invited into the Pack’s headquarters, which is part meeting hall/part bar/part dance club. When one of the men starts hitting on Harry, Cian seems to stake his claim by personally dropping a bowl of stew in front of her. We saw this routine in the Kate Daniels series when Curran is staking a claim on Kate by feeding her, i.e. handing her a bowl of soup = I feed my woman. This seems to be the same premise since all the men then instantly begin avoiding Harry like she is Typhoid Mary and no one will dance with her. Harry is given the heads up about Cian’s little claiming with the stew, but when she confronts him about it, he gives a confused “What? Oh, wow.  Oh, sorry about that” as if he has never heard of this shifter ritual. What? If handing a woman food is as good as writing your name across her forehead, this shouldn’t have been an oops on his part.

Although Harry can talk to ghosts and is working with the murder victim, it is convenient that when you need information and details about their murder, that information is foggy and the ghosts suddenly can’t concentrate. Of course, there is no story if the victim simply tell us at the beginning of the story “I as murdered by Bob. This is what happened and this is why he did it.” But here, he was attacked from behind so his killer could be a mystery and Harry still has to figure out about the necromancer who is raising the dead.  There was plenty of story to be had without ghost amnesia.

Although there didn’t seem to be anything overly special about this series, it still could have been an enjoyable story with Harry investigating either with Nash or in spite of Nash. The problem I had is that they went from being smart and knowledgeable about the paranormal world to which they all belonged to their entire lives, but still kept stepping in the poop and then being confused how they got there. My interest waned as quickly as their intelligence.