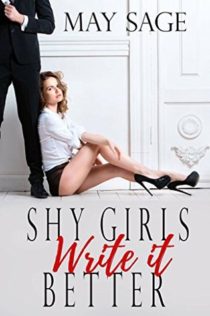 Shy Girls Write It Better by May Sage

Series: Some Girls Do It #1
Published by Createspace Independent Publishing Platform on October 13th 2016
Pages: 182

Cassie Franklin trips over nothing on perfectly flat surfaces every day, and she cannot seem to be able to simultaneously speak and look into her audience's eyes. Cassandra Frank is the ultimate tease; her words have aroused, intrigued and captured the heart of thousands... And somehow, they are the same person. Hiding the fact that she writes erotica isn't much of a challenge - no one would ever think that a plain, boring little accountant like Cassie could so much as read anything so scandalous... But one day, she makes a huge mistake. Carter Harris employs so many people he can't exactly recall all their names, but strangely, he knows her. She isn't an executive, she isn't sexy, or otherwise noticeable, but the girl is cute - in a helpless, unique sort of way. He can't pretend to say she ever crosses his mind, though... Until the day he finds the manuscript she worked on during her lunch hour.

Shy Girls is a quick, lighthearted and funny story and it was just what I wanted. It could have been great if there was more meat to it and didn’t end as soon as the relationship started.

I found this book in one of the many emails that I receive everyday about discounted or new books. I thought it sounded interesting but with so many backlogged on my list, I only grabbed the sample copy on Amazon. When I found myself almost depressed by the current story I was reading, I thought about this one and decided to give it a try and after two chapters, I downloaded the rest of the story. My original concern was that it would end up being one of those erotica stories that had no storyline, only words to take you from sex scene to sex scene.  What I actually got was a quick, light story, and just what I was looking for to take me out of the depressed feeling I was getting on New Year’s Eve with the more serious book that I had been reading.

Cassie is adorably cute and smart, but klutzy and shy and while her cuteness is noted by the CEO, Carter Harris, the women he dates are more sophisticated and polished and know that their “relationships” only include time for sex, Carter is too busy to get involved with women, especially cute, shy accountants. He doesn’t think too much about her until he mistakenly switches folders and walks away with her erotica manuscript instead of a contract. Suddenly he can’t stop thinking about the adorable Cassie and her naughty, naughty writing.

The only issues I have for this story are nitpicky. The story takes place in New York City, but the author is from the U.K. and makes those tiny flubs I sometimes see with other authors when slang comes in. Torch instead of flashlight. Flat instead of apartment. University instead of college. In Book 2, the character was asked if she got her “jab” instead of “flu shot.” Small things like that trip me up as I am reading and I have to remember where the story is supposed to be taking place. If the characters were British and living here, that is one thing, but Americans don’t use British slang in their day to day lives so it is as much a continuity issue as any other.

Overall, it could have used more story. It was a good concept with enjoyable characters. It also ended abruptly as soon as we got to the romance part. As soon as our hero and heroine decide to be a couple, and have sex, the story ends. It needed more.

After finishing, I wanted the next story which featured Carter’s no nonsense assistant, Lucy, and which was promoted as Book 2 of the series and indicated that it would be releasing on December 27th. When I tried to purchase it, the only other book was Scrooge McFuck and this was listed as Book 2. I purchased this one as well, which was even shorter than Book 1, and while I enjoyed it, I wanted Lucy’s story. I contacted the author at her email listed in the bio information and she did indicate that she decided to change up the releases so the Holiday story released for Christmas and that Bring on the Psychobitch would now be Book 3 and should release in a week or so.

If you need a quick, cute story to fill in between your favorite authors, give Shy Girls Write it Better a try.

Carter’s head snapped up. He hadn’t noticed the man who’d come in with her until he spoke to her, with a familiarity he didn’t like.

Carter recognized the guy; he’d seen him on her floor a couple of days earlier. It was one of her colleagues, no doubt. He was attractive, and clearly interested.

That pissed him off. A lot.

“Nothing much,” she replied, meeting his gaze and smiling up at him as Carter’s fists tensed. “A bubble bath, maybe.”

Great. Now they were all imagining her wet and naked.

“Oh, and I want to catch up on X-Men before the next one comes out.”

“Ah, you haven’t seen Apocalypse yet?”

“No, I didn’t get to see it at the cinema and they pushed the release of the DVD,” she pouted.

Carter wasn’t surprised when the guy offered, “I have all of them. You wanna watch them at mine? We could get takeout.”

The next ten seconds were tense as fuck; he didn’t think he breathed until she opened her mouth.

“Actually, I remembered I have some work to catch up on.”

The eyes were back to their evasion, dropping to her tiptoes.

“Alright. Maybe some other time, then.”

They’d made it to the ground floor. Fucking finally.

Everyone got out of the elevator; as Cassie walked past him, her arm brushed against his, and through layers of fabric, he felt a tingle that shook him to the bone.

She turned to him, startled, as though the current had hit her, too. As she held her gaze for one timeless instant, his body fought against his mind, willing him to close the gap between them and take her plump lips.

Tara’s syrupy sweet voice pulled him from the spell, and with that willpower, he managed to turn to his date.

WHAT THE HECK WAS THAT?

All he knew was the he had two choices: he had to stop this train wreck right now.

Or run with it.

He was pretty certain he knew what he was going to do.