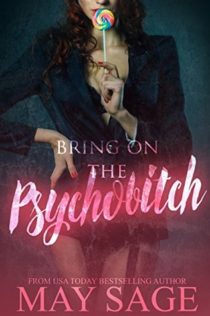 I was excitedly waiting for Lucy’s story.  Sadly, this story turned out to be disappointing.

In Shy Girls Write It Better, we are introduced to CEO Carter Harris’s unconventional Executive Assistant, Lucinda (“Lucy”) Warner.  Unconventional is a polite way to say the Lucy can be a raging bitch when it is necessary.  Lucy doesn’t have that filter we all have which keeps us from saying rude things when someone behaves badly.  Lucy is like a verbal ninja and when she strikes she will leave you in a bloody pool before you can even gasp your offense.  This makes her a fabulous characters, as long as you aren’t the subject to her rant, and in a story featuring her as the heroine, she should have dazzled the reader with her wit.

So why wasn’t I more enamored with this story, you ask?  Because this was Lucy’s story and we didn’t get to see any more of Lucy’s brutal honesty than we see in the other book.   She’s a ball-buster but even her nemesis relationship with Patrick “Trick” Johnson, CFO, isn’t really showcased at it’s most brutal and it is their story.

We learn that some of the antagonism between her and Trick is based upon the fact that these two met for a short period of time in High School.  He was a Senior and she was a Freshman and Trick was kind to the geeky, shy girl with frizzy red hair but before the end of the year, his family moved and she never heard from him again.  Forward a few years and Lucy is hired as the assistant to Carter.  Trick see her and presumes that his friend hired a playboy bimbo so he could get laid, and Lucy overhears Patrick’s disparaging assessment of her after one look at her.

For as long as Lucy has worked for Carter, she goes out of her way to avoid Trick or simply give him the stink eye and walk away if he comes to Carter’s office.  In the time they worked together, Trick never recognized Lucy as the young girl he befriended, and she doesn’t forgive him for his instant assessment of her.  It has a little bit of a Pride & Prejudice feel and Trick does make a reference to that story.

This story takes up when Carter offer’s to loan Lucy to Trick to help him with an important project and Trick just fired another incompetent assistant.  While Lucy is pissed that she is forced into close quarters with Trick, there is not enough verbal banter from the woman who can’t hold back.  Trick is busy drooling of the sexy woman he is now forced to work with but has to admit that Lucy is every bit as good an assistant as Carter raves.  Lucy tries to ignore Trick at first until he gets a hint that she is the same shy girl that he knew in high school.

Overall the story wasn’t bad for a short story giving the Psychobitch a soft side for the people she cares about.  But Lucy was introduced as such a vivacious character in the first two stories that I expected so much more witty banter, especially when we start out at such an antagonistic point between Lucy and Trick.  Where is the clever snark?  Where are the shut downs and attacks?

In fact, the only time we see her wielding her verbal katana is at some women in a restaurant who is all over Trick and he quite obviously is not interested.   This was slightly confusing as Trick goes into a diatribe about this woman, and where he knew her from and their past issues, and then she disappears after Lucy tells her to go away.  Why did we need her background history?  She could have been an aggressively, flirty stranger for all it mattered.

Maybe I expected too much from this story, but I am left with the feeling that the title of Psychobitch is over-exaggerated and that I was simply let down in my expectation.