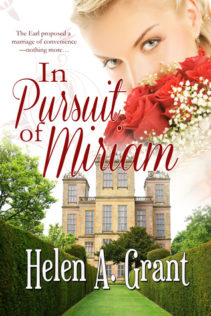 In Pursuit of Miriam by Helen A. Grant

This was a first published novel for Helen Grant. It had a good outline but what this story lack was embellishment. I would have enjoyed reading more conversations and interactions between Miriam and Vincent instead the very short conversations or the general references to “we talked.” Even though Vincent wanted to marry Miriam as a business arrangement, it was hard to acknowledge that she had any appeal to him when they had so little interaction.

In this story, Miriam was in a carriage accident as a toddler where her mother and brother were killed and her legs were so damaged she was left with one leg shorter than the other causing her to limp. Since this was a world before rehab and braces, her leg muscles were weak and she can only walk short distances and dancing wasn’t possible. Although Miriam is described as beautiful, her limp made her overlooked by the ton. It was well known that Miriam’s legs were damaged in an accident, but there was a stigma associated with her limp that even Vincent’s mother warned Vincent before they wed that he would end up with deformed children.

The basic outline of the story was a good skeleton, but I believe that it lacked was any meat. This was a scrawny story on the verge of starvation. Vincent wanted a wife so he could get his inheritance without having to wait until his 25th birthday. He comes up with the grand plan of finding a wife who he could dump at his family’s home in the country while he took his inheritance and continued his lavish lifestyle in London. Miriam’s father died suddenly and her cousin inherited the house. Miriam’s father suggested that the cousin should marry Miriam, but he chose a non-crippled bride-to-be and wanted Miriam out of the house once he was married. Miriam is taken by her aunt to Bath to find a husband. Bath is where the second string of debutantes go who weren’t chosen during their season in London as a last, desperate attempt to find a husband. Vincent notices Miriam (since she is beautiful) but dismisses her once he find out why she is sitting with the old ladies. After the bare-bones conversations, Vincent realizes Miriam isn’t like most of the desperate girls desperate for his money and title and decides Miriam will be perfect for his plan since she obviously would be grateful for his offer.

When I first finished this story, I thought my only complaint was the superficial bond between Miriam and Vincent which was not allowed to really cement. This is one of those stories that the more you think about it, the more problems you find.

Miriam started out very strong. Her father left her money and she wasn’t going to be choosing any husband. She had the money to be independent. She would move out and find her own house. Not only does she turn down Vincent’s proposal, but she turns down another suitor who is much older and unattractive. She comes off with a spine of steel, but after she can’t find a decent house that is within her budget or doesn’t have too many stairs, she starts to buckle and accepts Vincent’s proposal. Although she makes the best of her new life, when Vincent returns to London after the New Year, she indicates she wishes that she knew when Vincent would be returning and that she couldn’t possibly inquire. WHAT?? You’re married. You can’t say — Hey, I want to mark my calendar, when will we see you again, honey? Six weeks? Easter? July?

The biggest issue I realized that I had with this story is simply…Vincent is an asshole! Now, I’ll give you that Vincent is only 22 years old while Miriam acts more mature at 20 years. Vincent is younger than most of the heroes I read and he would still be young enough to be a self-centered ass.

Let’s start with his grand plan of choosing a wife of convenience so he can inherit his money, planning to dump her off in the country. He’s going from ball to house party, and he complains how desperate the girls act to marry his title. What do you expect when a young, handsome, rich, titled man walks into a ballroom filled with young single women looking for husbands? This is like a guy today complaining about the type of drunk girls he is picking up in bars. So no surprise that the quiet, reserved and very intelligent Miriam is a breath of fresh air to Vincent. He is shocked that she won’t accept his proposal to marry him so he can get his money and dump her in the country, even including a clause that after a few years they can get the marriage annulled since he doesn’t plan to sleep with her. A few years meaning once he’s 25 and would get his inheritance anyway and doesn’t need her anymore. Ass!

Once Miriam gives in and marries him, he takes her to his home where his mother still lives. The same mother who wouldn’t attend his wedding and is pissed off that he would marry a deformed, cripple instead of the neighbor girl she wants him to marry. After a few days, he takes off to London with his money and a “Bye. I hope my mother doesn’t rip you a new one.” He also plans to visit a prostitute while he is London since a goodbye kiss (which was their first kiss) left Vincent with an erection and he couldn’t bother Miriam with it. When he returns after several weeks expecting Miriam to be a brokenhearted, lonely shell, Vincent becomes quite pissed off to find our that Miriam has been making quite a life for herself in the country while he was gone. She and his mother have found common ground and mom comes to realize the Miriam is quite intelligent. She is also having a good time with her friend, Lucy and Lucy’s love interest who are visiting, as well as Vincent’s brother who is home from school on vacation. When Vincent talks to his brother about her, his brother comments that he thought he was crazy to marry Miriam but after spending several weeks with her, he understands how incredible she is and how lucky Vincent is. (Mind you, he has now spent more time with Miriam than Vincent has in total. So he would know better.) Hearing his brother’s praise of Miriam, just pisses Vincent off more. During the holiday party, Miriam dares to mention that he is dancing too many dances with the unmarried neighbor girl and it doesn’t look good, so Vincent punishes Miriam by making her waltz with him even past the point that her legs will hold her up. It takes awhile for Vincent to realize what a dick he is being to Miriam and to his family and then to realize that he has “feelings” for Miriam. Thinking it through, Vincent doesn’t have any redeeming qualities to recommend him other than being handsome.

I chose this story because I wanted to find out more about Miriam and her “lameness” and she sounded like a strong character. I was disappointed with the bare bones story. But in the end, the more I thought of this story after I finished, the more I disliked Vincent as a character. Although they fall in love and have a HEA, the most I can recommend is that it was a decent first novel for Helen Grant and I think she has potential.