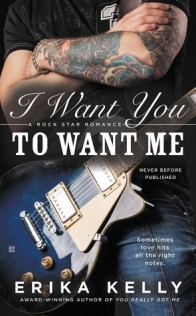 I Want You to Want Me (Rock Star Romance, #2) by Erika Kelly

[box style=”rounded” border=”full”]A great story with fabulous characters.  I have already downloaded Book 1 from the series so I can read Emmie and Slater’s story.[/box]

Blue Fire is finally making it. Their first album is working its way up the charts and they are on their first tour playing some festivals and opening for some big name bands like U2 and Kings of Leon. If all goes well, someday someone will be opening for them. But not everyone in the band is handling their first taste of stardom very well. Slater has Emmie to keep him focused on what’s important and Derek is busy dealing with the press and promoting the band. The rest of the members might have too much time on their hands for fun.

At the outset, the band pledged to keep their heads over the alcohol, drugs and the women but the aftershow parties are getting crazier and crazier each time. One party brings too much negative attention in the press and their A&R man, Irwin Ledger, is ready to walk away from them. Losing a big name like Irwin would trash the band’s reputation and destroy their chances of success before it even starts. Who would work with them if Irwin walked away?  Emmie makes a desperate call to her friend, Violet.

Violet Davis is a sober companion. She has helped several big names stars and corporate executives reclaim their lives and their reputations after losing themselves to drugs and alcohol. Violet helped Irwin’s daughter reclaim her reputation and Irwin respects her. With Violet helping control the situation, the band might just be able to save their relationship with Irwin and get back to what’s truly important — the music.

Violet always goes into a situation undercover. She steps in as either a girlfriend or an assistant to whoever she is helping and in this case, Violet falls into the role of Derek’s girlfriend. The longer Derek and Violet work together the more the lines blur between real and make believe. Violet knows that she is fighting the inevitable since the attraction between them is so strong, but her reputation is all that she has and sleeping with a client is not going to help her own career down the road.

If they give in to temptation, they could both lose their jobs and destroy their reputations but if they don’t give a relationship a try, will they lose something even greater?

THOUGHTS:
Let’s start off with the fact that I like that Erika Kelly chooses to makes her rock bank just starting out. This is their first tour with their first album still climbing the charts. Blue Fire (renamed by their new A&R from Snatch) is dealing with their rising star so they are not yet jaded by life as rock stars and they are only just starting with the attention and the groupies. Some members are like kids going off to college and having their first taste of freedom and they are going a little overboard with the parties. These rockers are trying to deal with this shiny new spotlight, including the women and drugs that go with being a rock star. It brings us in at a different place than other stories where the rockers are a well established and big name draws already.

Part of this is also Derek needing to prove himself both to his father, who was once a big name jazz musician, and to himself that he is truly a musician and not just flash and noise. Derek has a lot of issues with his father, first that he was ignored growing up and never allowed to be around the music and musicians who would hang with his father, and now that Derek’s star is rising and his father’s has long since fallen, his father his seeking attention in the media by disparaging Derek’s talent and his music. This is what Violet does best and I loved the way she handles his father and turns it all back on him in the media while teaching Derek how to handle these situations instead of simply being angry and overwhelmed by what his father is saying about him.

My one problem with this story was that we spent most of the book with both Violet and Derek being very accepting and understanding of each other’s baggage. They spent most of their time thinking, I understand why you are acting that way even if it hurts me, and keeping a calm head.  We spend a good deal of time with Derek needing to do something special for his career to prove himself as a musician with Violet constantly encouraging him to make the leap of faith. When he finally does and tells Violet that he needs her there with him, she goes “I got to meet a new client so I can’t make it.” I really wanted to jump in the story and punch her in the face. The whole story is “You have to do it. You have to do it.” and when he finally does, she can’t give him a “Let me try to reschedule. I know how important this is for you.” So after a whole book of two thoughtful adults trying to be understanding of the difficulties of each other’s childhood traumas and  career goals, they have tantrums and attack each other like children until we have a sudden turn around at the end for a HEA.

Overall, I liked the characters and I liked the story. I just felt the ending was suddenly out of character for both of them, like someone tapped the author on the shoulder and told her that there had to be a break up and a get back together, so she was forced to make something up and it just didn’t fit.  We were in both of their heads the whole story and knew how they felt about each other. This sudden conflict felt so off and out of character it just didn’t work.

I already picked up book 1 so I can read about Slater and Derek’s sister, Emmie. I will definitely will follow the rest of this series to see how it goes.

He lowered his face into her neck, breathed her in. “You want to know why I sleep in your bed?”

She held her breath, waiting.

“All day long, you’re vigilant. You’re the consummate professional, calm, in command. But at night? You soften in my arm.” He swayed with her, still holding her from behind. “You relax into me, and I love it. I love being with you. I could stay awake all night just to be with the Violet I get under the covers. Now, I want Violet on the dance floor.” His hands pressed into her stomach, and he kissed the corner of her mouth. “Dance with me.”

See? See what he does? The man was so dangerous. No wonder she couldn’t turn him away. Had anyone in her life ever made her feel this good about herself?

Screw it. For one night, what could it hurt?  He was right, the media was everywhere, and she was supposed to be his girlfriend. So she drew in a deep breath and turned in his arms. He led her to the dance floor, belted his arms around her waist, and held her close.

She tucked her head against his chest and sank into him. And he gave her just what she wanted–a tight, intimate hold. She hadn’t known what safety was until she’d stepped in his arms. Never in her life had she felt she could really, fully relax. Until him.

She answered by snuggling in even closer.

His hands pressed at the small of her back. “My sweet V. You feel so good.”

She gazed up at him, sifting her fingers through the hair at the back of his neck. “You overwhelm me.”

“With you it is. I’ll bet you push away all the guys. And they want you so much, they’ll do anything to have you, so they back off, give you time. What they don’t realize is during that time? You’re coming up with excuses why you don’t want them or can’t have them. So I think you need a guy like me.”

“A guy who sees right through you. Right into here.” He placed his palm on her heart, the heel of his hand touching her breasts. “You need me, Violet.” His teasing smile fell away as his features seized. Fear flickered in his eyes before he closed them and muttered, “Shit.” And then he brought her close, so close she could feel his heart thundering, his body heating up.

“Derek?” What just happened? What changes his mood?

But he fisted a hand in her hair, tilted her head back, and gave her a look filled with hot, churning need. And, oh God, was he going to kiss her? Blood roared in her ears because she…she couldn’t kiss him. He couldn’t kiss her.

But he didn’t. He just tipped his forehead against hers.

The music pulsed in his veins, bodies slammed into him, but the only thing he could process was this woman in his arms and the fact that she was his.