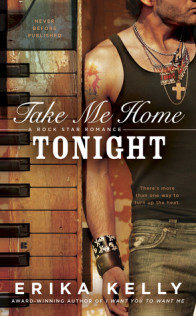 [box style=”rounded” border=”full”]I enjoyed watching this story unfold. Mimi is such a vibrant character and such a contrast to passionate but closed off Calix.  Calix screws up near the end and personally, I wouldn’t have given him another chance but thankfully this was a romance and there was a HEA. [/box]

Amelia “Mimi” Romano has been cooking for Blue Fire for the last year more as a way to pass the time until she can find an appropriate job. Even with an MBA from Columbia, Mimi hasn’t been able to get an acceptable position, or more importantly, a position working with her father. She has done everything her father has told her to do, but still it is not enough.   When Mimi is given an opportunity to go on a television cooking show to compete for a position as assistant chef to the host, she is beyond excited but her father insists that she decline the invitation.  He believes she will be an embarrassment to herself and more importantly to him.  Mimi is tired of fighting for his approval since she can’t get it no matter how hard she works, and she is going on that show.

The problem is that Mimi isn’t actually a trained chef.  She learned how to cook watching her father, but she isn’t really ready for the type of curve balls that will be thrown at her in this Chopped-type competition.  But apparently Calix Bourbon, the studio keyboardist who has been working with Blue Fire, knows a great deal about cooking.  Calix will work with Mimi but he has his own agenda.

Calix’s family has been stagnating since his brother’s accidental death three years ago.  His mother was hardest hit by the tragedy and she hasn’t truly moved on from that day, and neither has anyone else.  Calix retired from his band which was about to get national recognition.  His brother and sister never left the house to go to college and instead took local jobs.  They hover around their mother waiting for the day that she will finally break out of her depression and return to them.

Calix is hoping that working with Mimi will rekindle his mother’s love of cooking and just maybe it will be the push she needs to find joy in life again.

Mimi and Calix grow closer and explore their mutual attraction, but we come to see that Calix’s mother isn’t the only one who hasn’t been ready to rejoin the world since his brother’s death.

THOUGHTS:
Erika Kelly has written an enjoyable series in her Rock Star Romance with complex and interesting characters. In a way both Mimi and Calix have a problem with moving on with life. Calix is so afraid that his mother’s depression will lead her to suicide that he refuses to live his life and he doesn’t allow his family to lead theirs either. Calix won’t commit to being more than a studio musician for Blue Fire because he can’t leave his mother.

The Bourbon is a family that has music in the center of their life. Calix’s parents were part of a well-known, popular musical group in their youth. Calix’s band was going somewhere until his brother’s death and Calix left the group. Calix’s younger brother wants to work in the business of recordings. When Blue Fire needs help, it is Mimi who suggests Calix’s brother and his father to help out and although they want to, it is Calix who can’t let them spend time away from his mother. Of course, in three years, no one has ever come out and spoken with the mother about her grief or taken her to see a counselor, they just hover and wait to see if she bounces out of it.

Mimi has a wonderful, outgoing personality. Although Mimi is the first one to point out what everyone else needs to do to be happy, the one person she fails is herself. Mimi is no better with moving on since the only thing she has ever wanted was to spend time with and work with her Dad. She has an Ivy League MBA but he still wants her to have more. She needs more experience. She needs more of this or more time doing that. Instead of realizing that her father doesn’t want to hire her or simply isn’t going to give her a chance, she keeps waiting around to see when he will finally give in.

The story spotlights how quickly we become stagnant in our lives waiting for those things we are so focused on achieving that we forget to live our lives, and while we wait, we are missing out on things such as another opportunity that we are too busy to see or simply a great love.

I will confess that there were a few times that Calix acted in such a way that I felt was a bit unforgivable. Yeah, you apologize afterwards when you realize you had your head up your butt, but his gut reaction is so wrong it questions his ability to love outside of his family. You don’t want to always come in second to his family, and Mimi would never be considered his first priority. It’s like someone punching you in the face and then apologizing. He has moments where his feelings for Mimi are so intense we forget the last punch in the face, but then he does it again. When he finally breaks your nose, it’s time to walk away not find a HEA. (No, he doesn’t actually punch her in the face. It’s more an emotional punch in the face.  Whenever he needs comfort, Calix turns to his family and kicks Mimi away — hard.  Again, and again, and again.)

Of course, we want the HEA that’s why we read romance but Heroes & Hearbreakers just did an article on whether it was necessary which I will post a link in case you are interested. As much as I liked Mimi and Calix when they were intense and passionate, in real life I would have told her to walk away from his hot/cold behavior.

“The guys were listening to the tracks to see if they could salvage anything from the last four months.”

“Okay.” He definitely didn’t like her guilty expression, but where could she go with this?

“Your dad told them to cut back on auto-tune. He said Dak was trying to give Blue Fire his signature sound. And the guys agreed.”

Folding his arms across his chest, he faced her. “Yeah. So?”

“So, I suggested your dad be the producer.”

He closed is eyes. His dad would love to get in the studio, work with a band. Especially Blue Fire, a band that was all about the music. “Mimi…” he blew out a breath. “Why would you do that?”

“I don’t know. I just seemed obvious.” And then her tone softened. “Your dad said I had a big heart.”

“What you’ve got it a big mouth.” But he didn’t pack any heat behind his comment because he knew her intentions were good. And the suggestion made sense.

His gaze dropped to the mouth in question. That sexy, expressive mouth with those raspberry lips that he’d already tasted. Desire stirred in him, and he forced himself to look away.

She kept her focus on the fiddlehead. “I’m sorry for opening my mouth again.”

“Why don’t you shut it right now?”

Her head snapped up. “That’s not a very nice thing to say.”

“My mouth?” she whispered.

“Yeah. So, unless you want to stir shit up, you should focus on the damn ferns.”

“You’re thinking about my mouth, not how I suggested your dad produce Blue Fire’s album?”

As she sprinkled salt and pepper over the ferns, he came up behind her. His chest leaning into her back, he squeezed the juice form half a lemon into the mixture. “Still waiting to hear yours.”

“My fantasy?” She tipped her head up to look at him. “Yeah, that’s not going to happen.”

“You know what else you need?” His mom barreled into the kitchen, heading straight for the pantry. “Baking soda.” She set the tub on the counter. “I think you should make a quick bread.” Picking a fiddlehead out of the pan, she popped in in her mouth. “Perfect. Take it off the flame now or it’ll turn mushy.”

Mimi turned off the stove and dumped the fiddleheads onto a plate.

“Try one.” His mom grabbed a clean fork out of the dishwasher and stabbed one.

“I’d rather blanch my eyeballs.”

His mom looked between the plate and Mimi. Then between Mimi and Calix. “She serious?”

“You’re scared of a fiddlehead?”

“You see how tightly it’s coiled?”

“How many bugs do you think are lodged in there?”

His mom stared a Mimi. “Are you fucking with me?”

“I am in no way fucking with you. I’m not eating that. If an alien spacecraft slammed into Earth destroying the ecosystems, leaving us nothing but fiddleheads to eat, I’d go all-out cannibal. No remorse.”

For one strange moment, his mom seemed to take in all that Mimi had just said. And then she threw her head back and laughed. A deep. throaty laugh.

A sound he hadn’t heard in three long, painful years. 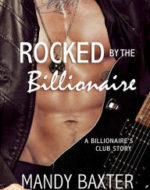 Review: Rocked by the Billionaire by Mandy Baxter
« Review: Marked by An Assassin by Felicity Heaton
Review: Dragon Heat by Ella J. Phoenix »