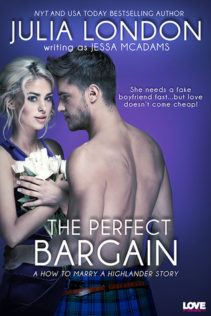 The Perfect Bargain by Julia London

[box style=”rounded” border=”full”]This was a sweet romance and a very quick read. It reminded me a bit of the movie Leap Year with Amy Adams. [/box]

Sloane Chatfield, of the Chicago Chatfields, had her heart broken when her fiance all but left her at the alter. Well, maybe not the alter, but the dress was purchased and the venue picked when Adam told her that she was too cold, both in and out of bed, and broke off the wedding.  As if it wasn’t humiliating enough, it didn’t take him long to find someone new.

Sloane’s best friends have been setting her up on bad date after bad date to help her get over Adam, and Sloane has had enough. After an episode of Outlander, Sloane decided to tell her friends that she needed to find a man like Jamie Fraser and planned her vacation in a small Highland village in the middle of nowhere in hopes that her friends would leave her be for a bit. No such luck since they are on their way to join her. Sloane had planned to announce that she met her Jamie Fraser, but then would fake a break up with her fake boyfriend just before returning home. Now her friends were on their way to meet him and Sloane is in the middle of nowhere without a Jamie in sight.

The only handsome man in this tiny village is the local pub owner, Galen Buchanan. Sloane and Galen haven’t gotten along  very well since Sloane arrived. She comes into his run down pub every day to use the only decent wifi in the Village and tries to give him suggestions to help improve his business but the annoying man ignores her and her “meddlesome” suggestions.

Sloane is hoping that an offer of cash to supplement his business will get Galen to agree to fill in as her fake boyfriend.  Galen believes the whole idea is daft but he could use the money to replace his dying refrigerator.

When a fake relationship starts to feel all too real for both of them, will the American and the Scotsman turn it into something real or will they chalk it all up to a holiday romance?

THOUGHTS:
I wouldn’t call this a stop what you’re doing and grab a copy romance. The premise was predictable and a bit ridiculous. But it was a lighthearted, fun story and a quick read.

The premise of having to go to a boring, tiny Village in the middle of nowhere for your vacation to escape your busy-body friends was a bit unbelievable. It was more unbelievable that Sloane and Galen didn’t look at each other and see the sexy, attractive person in front of them until two weeks after Sloane first arrived in the Village and started hanging around the bar for the free wifi. They each thought the other was annoying, but we’re to believe that until Sloane needed a fake boyfriend, she didn’t notice how hot and sexy Galen, even if his attitude turned her off? Really??  He’s the only young, attractive guy in the Village.  And same goes with Galen, all he noticed was her prim hairstyle and buttoned up blouses. He never noticed her nice figure or her beautiful eyes until she makes him an offer? Come on. He’s a middle of no where, he should have noted a young, attractive blond who walked into his pub, then decided that she was a pretty but annoying know-it-all.

A surprise visit from the ex-fiance who shows up to apologize and win her back, wasn’t really necessary.  She could have moved on and gotten over him without him showing up and making a jerk of himself.   Throwing in a standard romantic-comedy plot point just cheapened the story for me.   The story of Galen and Sloane forgetting their fake relationship and falling into a real one was more than enough of a story to keep your attention.

If you don’t look too deeply for the flaws, it was a cute little romance and would be perfect if you’re looking for a quick, beach read.

Sloane goes on an overnight with Galen to his brother’s farm to take care of the animals. His brother’s house is a one room, rural cottage. After an afternoon of hard work, Sloane just wants a hot bath and is dragging buckets of water from the hand pump outside into the bathroom.

After three more trips carrying the bucket in that excruciating manner, Sloane had managed to put only a half-inch in the bath.

“That’s okay, it’s okay,” she told herself before she burst into tears. “You really don’t need that much water.” Perhaps…but she needed it to be warm.

She went outside again and noticed the skies were darker and the wind had picked up, dropping the temperature. She would freeze. Her skin would turn blue and she would die in an old bathtub in a cottage in the middle of Absolutely Fucking Nowhere, Scotland. Well, that wasn’t going to happen. It was now imperative that she have warm water. Preferably hot.

She carried the last bucket in and poured it into the tub. There had to be a way to heat this bath. She dropped down to all fours and bent her head to have a look under the clawfoot tub, certain she’d find a heating apparatus there.

“What the hell are you doing?”

Sloane was so startled she jerked up and banged her head against the lip of the tub. “Ow, ow.” She grimaced, rubbing her crown.

“Mind your noggin there,” Galen said, and Sloane felt his hand on the back of her had. “Are you all right?”

She realized he was squatting beside her. “Yeah, I’m fine.”

“What are you doing under there?”

“What do you think? I’m trying to figure out how to heat this thing.”

Galen looked confused. He glanced at the tub. “I donna know what you’re expecting, but most of us just run the hot water.”

“Huh?” She lowered her head, examining the tub. “Where’s the switch?”

With a puzzled expression, he pointed to the tub. “There’s the tap, lass. A bit old, aye, but it’s the tap for water.”

“Aye, no’ without the pump turned on. Did you turn it on?”

Sloane could feel the burn of frustration building behind her eyes, threatening to emerge as tears. “Did I turn it on? Did I turn what on?”

Galen tilted his head to one side as if he couldn’t quite figure her out. But then he noticed the bucket, and his demeanor suddenly changed. A huge smile spread across his face, crinkling the corners of his eyes and creating dimples beneath his new beard. He looked annoyingly cute as he tried not to laugh, which made Sloane’s frustration soar. “What is so damn funny?” she demanded.

Galen burst into laughter. He laughed so hard that he fell back on his bum and into the doorframe. He threw one arm over his belly as if to contain the laughter that was thundering through the cottage.

“What is so funny?” Sloane cried, pushing herself hard against his leg.

“I did!” she exclaimed heatedly. “I had to use two hands because it was so rusted. Doesn’t anyone ever take a bath around here? And I filled the bucket with water and I carried it in,” she added, holding up her reddened palms, “but now all I want to do is heat it. Is that asking too much?”

Her shoulders slumped. “Are you kidding me right now?” she asked weakly.

Galen was still grinning as he hopped up and grabbed her hand in his big, rough one. He held it tight as he tugged her along outside and around to the side of the house. He chuckled again when he saw the mud beneath the outside faucet, but reached up to a metal box attached to the house, which Sloane had not noticed until that very moment, and opened it. He flipped on a switch that was clearly labeled water pump; and from somewhere below the house, Sloane heard a motor shudder to life. He grinned down at her as he closed the box. “I meant you had to turn it on. It’s an electric pump that bring the water up to the house. I know we’re a bit on the side of primitive here, but we’ve no’ had to manually pump water to our homes for many years.”

Audiobook Review: How to Train Your Highlander by Christy English
« Review: Flight from Death by Yasmine Galenorn
Review: I Want You to Want Me by Erika Kelly »