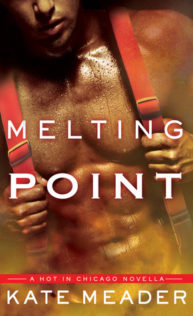 [box style=”rounded” border=”full”]I was happy and disappointed with this novella. I was happy to see that Baby Thor and his grumpy bear boyfriend got their own story, but I would have liked more story that wasn’t just sex and the back and forth angst of will they or won’t they stay together. [/box]

When we left Gage and Brady at the end of Flirting with Fire, it seemed the boys were finally going to get together but as we start Melting Point, Brady had once again bowed out of any relationship with Gage. It is not an issue of Brady denying his homosexuality. It is more an issue of dark, brooding and scarred Brady can’t see himself holding onto the gorgeous, sunny, god-like Gage and he doesn’t want to get his hopes up and his heart broken.

As Melting Point starts off, Brady gets into a motorcycle accident trying to grab a peek at Gage’s hot billboard which is still up around the city. He dislocates his arm and has a concussion. The hospital won’t discharge him so he call’s his friend, Darcy to pick his up. Darcy, of course, calls her brother-in-law Gage to help Brady out of the hospital.

Gage is tired of chasing the hard-to-get Brady, but he won’t leave Brady to suffer when he can’t move. Gage also decides to give it one more try while he has Brady at his mercy. While helping Brady out of his clothes so he can shower, Gage shows him that his various scars from his capture in Afghanistan are not a turn off to Gage.

As we have learned from many, many stories sex doesn’t solve all problems but it can distract long enough to try and work through issues.   Brady is not only concerned about his scars being a turn off, but he has nightmares about his captivity and he sometimes wakes up violently.  Whenever Gage sleeps over, Brady won’t sleep because he is afraid he will wake up hurting Gage.

We also learn that there is more to Gage’s sunny disposition than the fact that he loves life. It is his defense mechanism which he developed from years of being tortured by his overly zealot mother who kept trying to save him and cleanse his homosexual soul. Gage always knew he was gay and would put on a the-hell-with-them attitude whenever anyone treated him badly because of it. Gage tries to always keep a happy face for Brady since Gage feels his problems are so beneath anything that Brady has suffered that Gage has no right to complain about things.

THOUGHTS:
Brady and Gage were stand out characters for me in the prior story. I wanted them to have a story of their own. I was glad they got it, but I would have liked to see more bonding between them other than just sex. If they weren’t having sex, there was just a lot of “we can’t be together,” “you’re too good for me” and “I can’t be what you need me to be.” How about more trips to the market together or watching football with the guys or just some more pages of everyday fun and getting to know you that didn’t involve angst or sex, just to round out their story some more.

I am sure we will see more of Brady and Gage, even if it is only in the background of the other stories. I just would have like to see them shine a little more while the spotlight was on them.

Time to man up. Hauling a fortifying breath, he stomped around the side of the building to the backyard patio, site of the private party. With every leaden step, the buzz of alcohol-lubed cheeriness increased in volume. The thunder in his blood with it.

Fuck, he was nervous.

Twinkling white lights hung between the trees out back, illuminating smiling faces sitting at picnic tables, drinks in hands. Brady scanned the crowd, insisting that he was scoping it out for Darcy. He had no trouble spotting her, a pale, vibrantly inked arm slung around Beck’s waist, her raven-dark head resting on his chest. His survey included a man-to-man nod at Luke and a half smile for Luke’s girlfriend, Kinsey, the brains behind the Men on Fire calendar and those dick-hardening billboards.

Panic knotted in Brady’s chest when the one person he wanted–needed–to see didn’t immediately pop up in his vision field.

“Can I interest you in a Cock-Sucking Cowboy?”

Brady whipped around, realizing now that he’d walked right by the makeshift bar they’d set up to keep the party hydrated and sloppy. A trio of very giggly women leaned on the counter, their eyes–and other body parts–all pointed at Gage.

Who was wearing a fucking cowboy hat.

“Excuuuuse me?” One woman shrieked. She had a pair of tits that even Brady could acknowledge were spectacular.

“One of my finest cocktails, ladies,” Gage clarified with that heart-stopping grin. His T-shirt read: “Firefighters. Because Badass isn’t a proper job title,” and he held a card that looked like a menu. “Peach schnapps and Bailey’s. Or maybe you’d prefer a leg spreader: tequila, vodka, rum and gin. Hits all the main food groups and guarantees the good time your man can’t.”

The girls cheered that marketing strategy. Tits on Heels asked, “How about a Sex on the Beach?”

Gage gave a rueful shake of his head. “The sixties called, darlin’, they want their cocktails back. Next you’ll be asking for a Harvey Wallbanger and I’ll have to cut you off before you’ve even started. Don’t make me cut you off.”

“No, don’t cut us off!” More jovial/desperate pleas followed, punctuated with orders for three Leg Spreaders.

Covertly, Brady feasted on the easy, lithe grace of Baby Thor, the nickname Kinsey had given Gage. Brady didn’t usually go for blonds with silvery blue eyes that sparkled with dangerous invitation. Neither did smartass grins do it for him, or a strong jaw that hadn’t made acquaintance with a razor in a day or so. None of it normally appealed because Brady considered himself untouchable by the charms of a twenty-four-year-old playboy who would summon any guy he wanted with a click of his fingers.

None of it appealed until Gage.

When Gage walked into Brady’s kitchen at Smith & Jones close to three months ago, Brady’s brain had short-circuited at seeing that kind of beauty in the flesh. Every new meeting since had only heightened his attraction, but that first time–Christ, it had been like climbing out of a deep, dank hole into blinding, cleansing daylight.