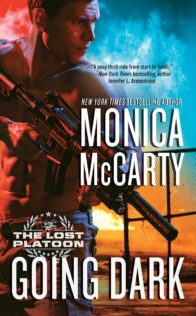 Like Rome's Lost Legion, a SEAL platoon goes on a mission and vanishes without a trace.

After walking into a trap on a covert op in Russia, the men from top secret SEAL Team Nine are presumed dead. Not knowing whom they can trust, and with war hanging in the balance, the survivors must go dark and scatter around the globe.

Marine ecologist Annie Henderson joins her new boyfriend on a trip to the Western Isles of Scotland to protest a hazardous offshore drilling venture. When she realizes that she may be swept up in something far more dangerous than she'd intended, there is only one man she can turn to. . . .

She and the mysterious but sexy dive boat captain haven't exactly gotten off to the best start, but something about his quiet confidence makes her think that he's the kind of man she can depend on. Because he's gruff and guarded, she can tell Dan Warren has secrets. But she could never imagine how high the stakes are for him to keep his cover, even as he risks everything to protect her. . . .

Wow!  This book caught my attention and I am so glad that it did.  It was gripping. exciting with great characters and set up for more stories.  I can’t wait to see what’s next.

I requested a copy of Going Dark to use for our Friday Giveaways but once I received it, it caught my attention and I  decided I needed to hoard this one for myself, and I was really glad that I did.  Monica McCarty has written several historial and highlander romances.  This is McCarty’s first contemporary novel and it was brilliant.  The action was well-blended with the romance.  There was insta-attraction and the high tension of the situation lead to insta-love but made it believable.   While the short term situation gets dealt with before the end of the book, there is an overall story arc involving the covert op in Russia that went bad and the surviving members of the platoon who are hiding and trying to figure out who screwed them over so you will probably be in this for the long haul  and I don’t know how many books we will need to tell it all.

Here, Annie Henderson, Marine Ecologist, has come to Scotland to protest the proposed off-shore oil drilling which will be much too close to the shoreline and will ruin the  marine and wildlife in the area, as well as the lovely coastline, especially if there is another major oil spill.  She arrives with her French boyfriend, who she met at another rally after the Gulf Spill.  He tells her that he and his friends will be swimming over to the drilling platform and having a sit-in to bring attention to the situation, but their plans are more nefarious than that.

Julian seems to be acting odd and Annie realizes that she hasn’t really known him that long and maybe this whole trip is a mistake.  Annie gets a bit concerned that Julian and his friends are keeping something from her.  She searches their supplies and finds cases of explosives.  Annie then goes to Capt. Dan to get his help.  Dan manages to capture the thugs and was planning to take off before the Coast Guard arrives but after Annie gives him a pleading look and he gives in and takes her with him.  A good thing too since the thugs managed to get loose and have now convinced the authorities that it is Annie and Dan who are the international terrorists.

Dan Warren (formerly Senior Chief Dean Baylor) has to keep them alive and out of the  hands of the authorties.  He is supposed to have gone dark until he heard from his Lieutenant.  Someone set up his Platoon to die in Russia and no one can know that there were survivors.  Rescusing a clueless protestor isn’t staying under the radar, but he doesn’t want to think what might have happened if he had left Annie behind.  He needs to get Annie safe and get back to his mission to help uncover what happened to his platoon.

There was one matter at the end of the story where Annie does something completely stupid, where I am actually saying out loud “are you kidding me?” But I won’t allow it to detract from the overall story or Annie’s character.  While she did get herself into quite the predicament, it wasn’t unbelievable and while Dean calls her naive you can understand where unless you believed at the beginning of your relationship that your boyfriend was an international terrorist, that you wouldn’t have cleared your computer passwords to keep him from buying bomb materials with your credit card, or you wouldn’t think much of him having the boat chartered  in your name since you are the dive expert.   Once Annie realizes she was the patsy, she understands just had badly she allowed herself to be embroiled in their plans, and how guilty she looks.   Annie works to raise herself in Dan’s estimation and proves that she is an intelligent woman.   So the stupid move at the end stood out even more as completely stupid and once again, naive.

McCarty blends the Russia-arc smoothly into the overall story.  The action keeps steady with breaks for the romance growing between Annie and Dean.   Annie and Dean have great chemistry both in and out of the bedroom.

If you like an action-packed military story, this is definitely worth the read.

Dean was so focused on navigating the boat he didn’t realize it had begun to rain until Annie shivered.

He swore, realizing her jacket–although down–wasn’t waterproof. Of course, one of the things he hadn’t replaced in his kit was the emergency Mylar blanket. “Here,” he said, staring to unzip his waterproof shell while holding the wheel with the other. “Take this.”

She shook her head and stopped him with her hand on his arm. “I’m not taking your jacket. You need it more than I do. Besides,” she added with a smile, “what kind of card-carrying member of NOW would I be if I let you do that?”

“A dry one,” he quipped. She laughed, and he looked at her sidways. “Let me guess. You have all kinds of cards in your wallet.”

She was the type to put her money where her mouth was. Or maybe he should say where her heart was.

She grinned–a little too happily to his mind–and started rattling off every bleeding-heart, save-the-whales type of organzation he could think of and some he’d never heard of.

But he held up his hand when she got to the policial ones. “Stop. I can’t tak it anymore. You had me at the last one.” He gave a dramatic shudder.

“They do a lot of important things–“

She paused to look up at him. The brim of his hat had kept most of the rain off her face but one or two drops had caught in her lashes. Her eyes were gorgeous–especially when they were sparkling with amusement. “I’ll keep the jacket if you promise to stop.”

She smiled as if that had been her intention all along. “Deal.” It was her turn to look at him sideways. “Let me guess…”

He grinned. She didn’t even need to say it. “Cold, dead hands, baby.” He sobered. “‘Baby’ in the nonmisogynistic sense of the word.”

“Obviously,” she deadpanned back at him. “Although I’m surprised that they teach that word in caveman school.”

He gave a sharp bark of laughter. He’d never met a woman who gave him shit the way she did. “Yeah, it was in the words-over-four-letters class, right between Dragging by the Hair 101 and Patriarchal Society 200.”

She threw back her head and laughed, which stopped his jesting cold. It was replaced by a hard bolt of lust. Lust that despite the weather and their precarious situation made him hot and about a half second away from pulling her into his arms and putting his mouth on that tempting, creamy-looking throat. Which would be a really bad idea.

That he could lose focus in a situation like this, even for a moment, was disconcerting enough to snap him back to attention. Situational awareness on an op was something he’d never lost sight of before.

Having no idea of the effect she’d just had on him, she lifted her head to meet his gaze, still smiling. “Let me guess. You excelled in all our subjects?”

“Enough to teach you a few things if you were interested.”

“You don’t know what you are missing.”

She rolled her eyes. “I can guess.”

He wondered if they were talking about the same thing. If they were, she had no fucking idea. “Let me know if you want a rain check.”

He had to force himself to look away. She was so beautiful he was getting distracted again.

He lasted about a mile. That was the point when the drops of mist turned into full-fledged rain. Sexist pig or not, he wasn’t going to sit here with a coat on that was keeping him dry while she got soaked.

He thought about pulling her into his lap and not giving her a chance to argue, but as that might be seen as coming a little to close to the pig part of the equation, he decided to take a more suble route. There was a first time for everything. “I need you to help with me something.”

She sat up. “Of course. Anything.”

“I can’t keep the compass steady, hold the map, and steer the boat with the waves like this.”

He scooted back a little in the seat. “Come sit here.” Said the spider to the fly. He motioned in front of him. “You can hold the map and the compass where I can see it, while I steer.”

She frowned as if wondering whether she should be suspicious.

As MacDonald would say, smart lass.

Dan had to slow the speed, and it took a little jostling, but a few minutes later she was tucked against his chest and his coat was discretely pulled around her. shielding her from most of the rain.

There was one big problem–a problem that was getting bigger and bigger by the moment. The plastic seat in front of the helm could be adjusted, but not enough to give their bodies any space between them. Which essentially meant that her back was pressed against his chest, her head was tucked under this chin, and her firm, perfectly curved ass was nestled right into his crotch, and with every bump of the boat, that very incredible bottom was slamming against him. He dick–the brainless, too-long-ignored idiot that it was–was taking notice and standing hard at attention. Emphasis on hard.

Review: Rush by Joan Swan
« Review: So I Married a Sorcerer by Kerrelyn Sparks
Review: Secrets in Death by J.D. Robb »